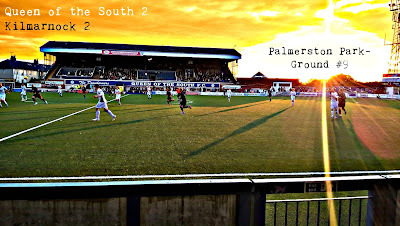 With just over three weeks to go until the start of the season for Queen of the South and only two weeks for Kilmarnock, tonight’s friendly was bound to be the real deal for these teams who would be looking to shake off their respective disappointments from last season.

Queen of the South were only halted from Premiership football this season by Rangers in the Scottish Championship playoff and more specifically by former Killie favourite Dean Shiels, whereas Kilmarnock suffered from a terrible end to the season which nearly saw them fall into the relegation playoff. Because of this, all at Palmerston Park were expecting a tight clash.

I arrived in Dumfries nice and early to get my ticket from the ground, which was surprisingly tough to find due to the fact the Ice Bowl was signposted everywhere and the football stadium nowhere. Good old Scots and their love of all things cold. When I eventually found it tickets were purchased for 5 of my finest pounds and a bonus that seating was unallocated. With tickets purchased I headed to the pub for a beer and burger combo (not even Angus beef!).

By the time I got back to the stadium it was buzzing, the Killie fans had made the 60 mile trek from Ayrshire and the atmosphere is what I would call “not bad”. I took my seat right at the front, just to the right of the halfway line and prepared for some traditional 4-4-2 football. My pre-match prediction was 0-0. Having arrived just in time for kick-off, I apparently missed a minute’s silence prior to the match- and then several more from the very quiet supporters during the match! A slow start but Queens looked fairly bright and attacking-minded, with Callum Tapping looking like the best on the field. Although I didn’t know any players for Queens, it took no time to get to know the traditionally Scottish named players such as Dowie and Russell. The chanting was virtually non-existent and I feared that my shouting at shots gone wide and heavy tackles would wake the neighbours. One man had the imagination to repeat “stick it in the net” every time the ball entered the final third, not the catchiest one I’ve heard but at least he had a go. Perhaps the most humorous thing about the referee and his team of officials this evening was that they were all wearing kits sponsored by Specsavers, which I have since found out has been the case for the past few years. It certainly eradicated the usual “should’ve gone to Specsavers lino" screams we get in England. On top of this, the other main fascination during the first half was with how many kids were leaving the stands to go and buy Scotch Pies (I counted 11) from the tuck shop. This simmered down slightly after the opening goal, a rifled effort from front-man Hilson, following a long ball which was hoofed up the field- in England we would call it Sunday-league tactics, but it seemed to work for the lad. Queens 1-0 Killie. That is how it remained until half time.

During the break I quickly discovered that Dumfries appeared to be one of four towns in the UK who still enjoys the music of Status Quo. The band had posters plastered all over the ground for a gig at Palmertson Park and it wasn’t until further inspection that I noticed this event had already been and gone last month, gutted. I quickly grabbed a halftime cola from the tuck shop and took my seat ready for hopefully a more end to end 45 minutes.

The second half saw subs galore to start with- which seemed to be Kilmarnock’s way back into the game. Rory McKenzie came on and took a hold of the game, duly swatting in the equaliser thanks to some good work from Josh Magennis. Queens 1-1 Killie. Following this, the game finally opened up to become the game that I had hoped for, rather than the game that I had expected and so far received. Killie continued to make the changes and they even gave star man Kris Boyd a run out- Queens fans sat nearest to me could not contain the excitement of seeing a Scotland international and one lad in particular could not help himself but to shout “give us your autograph Boydie!” every single time he got the ball. At this point about a dozen lads were asked to leave by two policemen following an incident where one of them had started to get a bit overexcited. The Killie fans were in full voice by now and they could sense a winner was coming and with about 15 minutes to go McKenzie, Scotland U-21 international, smashed one in for the Ayrshire side to take the lead. Queens 1-2 Killie.

I thought that would’ve settled the match, but from the kick-off Queens darted forward and instantly won a free-kick. At this point the sun was so low that I was struggling to see what was going on, but it looked as though Lionel Messi had come on for Queens and took it upon himself to run past the entire Killie team before winning the free-kick just outside the box (cannot confirm this though). Either way, Conroy stepped up and swung his left-footed effort straight past the wall and into the net- a great finish and on the whole a deserved equaliser. Queens 2-2 Killie. The last 10 minutes was mainly consisting of subs, with Kris Boyd laying a few Queens players out in between. Full Time, Queens 2-2 Killie.

After the final whistle I hastily left the ground as the Scottish air turned from tolerable to nippy. The first taste of Scottish football was good, although I would like to say that in my opinion neither of these sides were any better than Macclesfield Town. The ground was similar in size and layout to Moss Rose and had a similarly nice crowd- it certainly felt like a friendly match all round.
Posted by Daz Knapton at 12:07