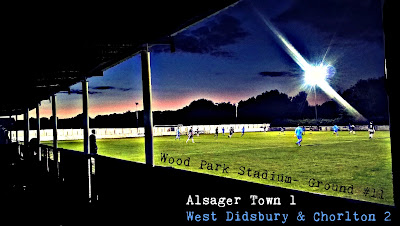 Since starting up my blog last month I have witnessed the highs of Bolton Wanderers and Kilmarnock, to the lows of Congleton Town. On top of this, I had seen a grand total of 17 goals across 5 pre-season matches and tonight I was determined to attended my first competitive match of the season thanks to an early finish at work. Had I been a matter of minutes earlier getting home I could've had the time to go through to the Moss Rose and catch Macc vs Southport, however, this was not the case and I knew that a more local game would be on the cards. Having visited Port Vale's defeat against Bolton recently, I decided that I should give a different ground a try. After quickly looking on Google to see which midweek thriller I could get to in 30 minutes or less, I found myself travelling to Alsager. Following a long and winding ride through the north of Staffordshire, I crossed the border (just!) into Cheshire and arrived in the small town. With about 15 minutes until kick-off, I parked up on a small road and looked for the ground. I already knew that this was going to be a proper non-league team. No signs for the ground, no fans in sight and a general feeling of being in the wrong place!


So, I walked in the direction of a sign, labelled "CAR PARK FULL", through the gap between two houses and all of a sudden I was here, at Wood Park 'Stadium'. Knowing it was close to kick off I approached the entry turnstile and was instantly greeted by a chap sat reading a newspaper. We then had an awkward conversation:

Me: Hi there, just one please.
Man: One season ticket?
Me: Erm, no. Just for the game tonight please.
Man: Oh. Okay then. £6.
I then withdrew my wallet to gather the cash. He laughed at the small change I was carrying...
Man: You must be a student, just call it £3 then. It's cheaper for a student or OAP.
Me: Ok.
Man: You are a student right?
Me: Yup.
Usually I would never try to pass off as being a student but the fact that he assumed I was one because of my lack of notes in my wallet made me go along with it.

I then proceeded to buy a programme and head over to pitch-side, where I was pleasantly surprised to see that the area I had chosen was seated. Granted, the seat numbers were measured out and labelled on a number of benches, but it was seating nonetheless. Before the game I knew nothing of either side, so whilst I waited for the kick-off I checked out Alsager's pre-season form. 1-6, 2-5, 1-4, 0-4, 1-3 and 2-3 (all defeats) against various local teams soon revealed to me that the Bullets weren't necessarily going to be the best team that I had ever watched. Added to this they had suffered a heavy 0-4 loss on the opening day of the season to AFC Liverpool, so I was slowly starting to wonder if another drubbing would be on the cards. I noted that West Didsbury & Chorlton had also lost their first game and it was at this point that the teams came out. A thriller was in-store, no doubt. My pre-match prediction would have to be for a high-scoring draw. 4-4 would be nice.


And so it began- in a great way too- with some good old-fashioned clearances up the field leading to many early chances. The left-back for Alsager looked decent and he was popping the ball into the right areas. A burst of pace from the number 11, Jack Wooley, meant he could beat the centre-back and produce a high-quality lob over the on-rushing keeper. It bounced into the empty net and the Bullets were ahead. Alsager 1-0 WD&C. The theme of the game continued in the same way, with some good short passing often wasted with an over-ambitious long-ball. Lewis Schofield for West Didsbury looked fairly skillful and saw a lot of the ball, however his weakness was soon spotted. "He's all left foot." shouted an Alsager player, before another stamped on his toes to give a foul away. The man guilty of the foul walked away saying "So am I". Another thing which interested me was that the so-called ruling on players not using foul language towards a referee obviously wasn't adhered to at this level. The abuse rained down on the ref, who was constantly quizzed about his decisions.


Roughly half-way through the first half, West Didsbury started to press for an equaliser and it was shortly after when a poor headed clearance from the home side led to Jordan Poole clonking a low-hit volley into the net from 20-yards, another good finish. Alsager 1-1 WD&C. There wasn't too much to shout about for the rest of the half, with the main interest of the fans being a raffle to win a bottle of something from the bar and with it being all-square at the break I decided to give the clubhouse a whirl. Filled with a nice bunch of home and away fans, I grabbed myself a pint and looked at the half-time scores around the grounds. I was very touched that the Alsager staff had laid out a buffet and pots of tea and the away few were loving it. One fan showed his appreciation by saying to his mate "It was worth getting into this league, just for the hospitality". Great stuff.


With half-time nearly over I popped back to my seat in time for the second half. The lads kicked off and the match was back up and running. At this point, a couple of guys appeared nearby to my seat and took a sudden interest in the game. After overhearing some of a conversation, it became apparent that one of the guys was a Trialist at the club. Soon after this, one of the Bullets coaches came over to ask him if he could attend training on Thursday. Following all of these transfer negotiations that I was hearing about, I turned my attention back to the pitch just in time for a key moment. West Didsbury whipped a corner in to the area and the big centre-back hit a bullet header into the goal, giving them the narrow lead. Alsager 1-2 WD&C.


That would be how the match would end, with chances at either end it seemed that on a day where if either side was in form we could've seen many more goals. But in fairness the side who had travelled from Chorlton-cum-Hardy, just outside of Manchester, looked the more likely to extend their lead. One more chance to equalise from the Bullets was squandered in the last few minutes as a weak header passed the post.


The full-time whistle blew, Alsager 1-2 WD&C was the final score, with the Bullets failing to capitalise on a decent start. As I left the ground I saw the Trialist player talking to the manager and one fan who must've seen him before told his mate that he was to become the club's newest signing. His mate asked "how much we signing him for?" and a sarcastic reply followed of "£128 million was the original bid", which put a final smile on my face as I walked away. A decent little ground and not a bad game from the two sides. It wasn't quite the Potters vs The Red Devils, but it certainly had a certain something about it which left me feeling satisfied.
Posted by Daz Knapton at 14:10