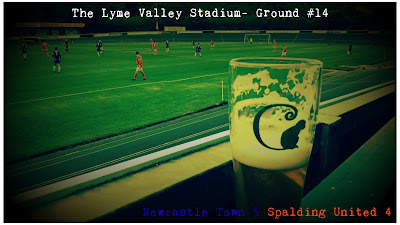 It's Saturday afternoon, it's my weekend off and the FA Trophy is beckoning. Still buzzing from the enjoyment of my trip to Kidsgrove on Wednesday night I was hoping for another good game between two teams from the same level of English non-League football. Four goals were scored by the home side on Wednesday and today I was watching teams who sit in 15th and 8th respectively, so surely I would be able to expect more of the same in terms of attacking football, dodgy defending and hopefully enough quality to see the odd goal.

Upon arrival at the ground I rushed into the ticketing booth to purchase a ticket, when I bought said ticket I decided to ask if it was likely to be a busy one. He looked at me with a sour face and regrettably exclaimed that we'd be lucky to get 100 this aft. He also claimed that he couldn't understand why it was so busy due to the fact that Stoke City were away. Being that they were playing against Aston Villa, I doubted that any true fans would mind travelling to this particular away fixture, but rather than sounding rude I simply said "Yes, but Vale are at home, so that may explain it". All of these ground-hopping days are giving me a great knowledge and high-standard vocabulary of the non-League. With this, I entered the ground and took a few minutes to have a look around before kick-off. Having seen an image online of a very nice looking Lyme Valley Stadium, looking great in the floodlights in it's circular form, I was somewhat underwhelmed by the reality of the blue sheds, cramped urinals and lack of seating- good job there wasn't many in attendance today.
To the credit of 'The Castle' it wasn't that the stadium was terribly bad, it was more the fact that after visiting The Novus Stadium (Kidsgrove), Queensgate Park (Scarborough/Bridlington) and of course the mighty Moss Rose, I was feeling that today's ground was more on par with Alsager's Wood Park Stadium as being a very average ground. However, the cycling track around the outskirts of the pitch did give the rounded form to the ground, a somewhat quirky feature. I also had to have a chuckle at one of the players, presumably injured/not selected, as he was the first person I saw to have a beer in his hand. Spalding United, aka 'The Tulips', were today's opposition and they went in to the match as slight favourites due to their higher place in the Evo-Stik First Division South Table, albeit only by 3 points. The Castle had lost their game midweek away at Market Drayton, whereas The Tulips had only lost 1 match in all competitions this season (against high-flyers Stafford Rangers). With kick-off looming I scouted out a good standing spot and prepared for the opening match of both sides FA Trophy campaign. Due to the form of Spalding, I predicted a 2-0 victory. I assumed that neither side would want a draw at this stage of a busy season, with the replay pencilled in at Spalding for Tuesday night.

Kick-off had only just taken place, but Spalding United were already cracking on with some forceful play- and within the opening couple of minutes The Tulips were ahead, after Griffiths knocked in the first goal of the afternoon. Castle 0-1 Spalding. With this, the few fans in the ground had their heads down and seemed set to endure a painful outing today. Castle kicked-off and following a couple more minutes of hit and hope football, Neville Thompson outran the defenders and calmly slotted home an equaliser. Castle 1-1 Spalding. The third kick-off in 5 minutes meant that we were under-way again- and not for the last time! With the amazement of two early goals, I decided to take my phone out to take a few action snaps, but in the time it took me to do that I looked up to see what looked like the aftermath of another goal. The complete non-reaction from the crowd made me doubt it, but the tannoy soon confirmed that Spalding had taken the lead again. Castle 1-2 Spalding. I was astounded by the early drama in the game, with one fan asking his son if he thought this would be a higher scoring game than England's Rugby World Cup match later this evening. (Sadly for England Rugby fans, it wasn't!)

Believe it or not, but following this third goal we had to wait at least another 5 minutes before the next. After I had moved over to a seated area, some good build-up play from Castle, mixed with some ludicrous defending from the Tulips led to an opening for Tim Sanders- and the former Leek Town man took his chance to grab the second equaliser just before the 15-minute mark. Castle 2-2 Spalding. My only recollection of a game with so many early goals was a flash back to 2005, when I recall watching Teletext to see a game between Bolton Wanderers and Aston Villa which was 2-2 after just 9 minutes. Unlike that game, however, the goals didn't end here- and for the first time in the game Castle took the lead. A nice strike from the midfield was palmed up into the air by Spalding's flapping keeper, it then hit the bar and bounced down into the path of Thompson and allowed him to grab another goal. Castle 3-2 Spalding. I thought to myself an amusing slur against the Tulip's keeper at this point- "They may as well have planted a row of Tulips on the goal-line at this rate, they might have prevented more goals than this lad!" is what I wish I would've said to the old lady sitting nearest to me. The next 20 minutes or so provided no goals, which to me was a signal that both teams had settled down a bit. There was a few fouls and the odd bit of good play, but the match certainly had taken a turn. Most of the impressive runs were being made by Castle's left-back, who unfortunately couldn't bring anything to fruition as his final ball was lacking. Towards the end of the half there was the opportunity for Castle to gain some breathing space. Following a corner from the right, a second ball was swung in and remained in the box for a few seconds until Marc Grocott crashed in a half-volley to put a bit of daylight between the sides just before the break. Castle 4-2 Spalding. This would remain the scoreline until half-time, meaning it was time to take a bit of time to absorb the first-half over a pint in the clubhouse. I popped in to find the most pleasant sight of all- the clubhouse was a Joule's Pub, which meant that they served my most favourite alcoholic bevvy.

I then came across today's 'Pint of Football Moment' in the clubhouse. A montage of photographs from 1995 showed that almost 20 years ago Newcastle United's Premier League squad visited the Lyme Valley Stadium, to which the images showed superstar striker Les Ferdinand training and then later on enjoying a pint in the same place I was now stood. A very touching moment and I'm sure it is one that club remain proud of to this day. I headed back to my seat with my pint in my hand, something which is never usually allowed, ready for the second-half and hopefully more goals.
The half-time team talk from Spalding's manager had obviously given the Tulips the spark they needed and they came out with the urge to get back into the game. With not too much of the second 45 played, the goals were flying in again- a header this time bouncing in off the post meant it was game on yet again. Castle 4-3 Spalding. Spalding continued to press and hoped for an equaliser, with the subs coming on to freshen up their starting XI. A big lad came into the match up top for the Tulips and it was his header that looked to have assisted an equaliser. Alas, he was offside and the goal didn't stand. Shortly after this, Castle broke at the other end and we were treated to an 8th goal of the game- and probably the best. Haughton got into a good space just outside the box and used his left boot to pop the ball into the net. Castle 5-3 Spalding. The opposition didn't give up though, despite giving away a few frustrated fouls and often looking like they may concede again on the break. Eventually, the pressure yet again paid off for Spalding and a second header for Newman meant that there would be a tense final 10 minutes. Castle 5-4 Spalding. The lady sat behind me decided to ask at this point what score it was. After telling her, she revealed to me that she was the grandmother of Castle's Tim Sanders, scorer of the second goal which seemed oh so long ago. Having met Giuseppe Sole's Dad in Macclesfield and Filip Twardzik's Girlfriend at Vale Park I was now in the pleasurable company of yet another proud relative. Despite a final push from Spalding, there were no more goals and it was Castle who progress to the First Round of the FA Trophy. The nine-goal thriller was over and it had been a true roller-coaster this afternoon.

I left the ground to hear a surprisingly downbeat announcement from the tannoy which was, "In the next round we will be facing Kidsgrove Athletic at home in four weeks time. Our next game at home is on next Saturday and will also be against Kidsgrove." He didn't seem too thrilled about the thought of two ties of the same opponent in the same month, but then again he was perhaps just tired from the nine goal announcements he had to make throughout the afternoon. Hopefully the next match that I attend, Macc vs Kidderminster on non-League Football Day, will be half as goal-filled as today's encounter.
Posted by Daz Knapton at 18:29