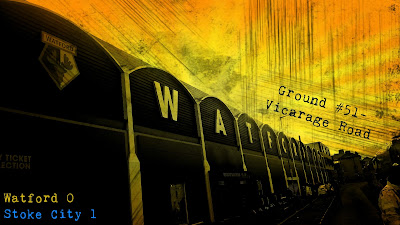 Well, here we go again. After what seemed like a lifetime away from pitch side, this weekend would prove to be a good chance for me to take in some more of the beautiful game. Having watched 50 minutes of an eventually abandoned match at Moss Rose on the Saturday with my good friend Will, we were left with an empty stomach that could only be filled by Super Sunday action in what would be a first ever Premier League match for the both of us.


Four weeks ago me and fellow ground-hopper Tom (Partizan Bristle) were midway through a five day tour of footballing greatness which included a Friday night in Dundalk, a Saturday outing to Cliftonville, a Sunday saunter to The New Saints, before a Monday night delight at Hednesford together before I concluded with a freezing evening in Winsford, so naturally this mere two day trek to Macclesfield and Watford would seem like light work. Nevertheless it would be an early start required on Sunday as we woke up in Stoke, who were also the opponents of Watford today, meaning that our 8:30am start would be close cut to making it to Vicarage Road for the 12 noon kick-off. After quickly taking care of a slice of toast and a brew, we were on the way down the M6 and M1 to make our way to Milton Keynes, where we would collect our tickets and then transfer on to the train to Watford. Easy, right? Wrong! With one eye on the clock ticking away as we crawled through the infamous 50 mile an hour roadwork areas of the M1, we eventually pulled in to the train station at 11am knowing that we would be arriving in Watford at 12:10pm, making us 10 minutes late for the game.


By the time we made it in to the ground there was 20 minutes on the clock and fortunately we had not missed any goals. We took our seats behind Heurelho Gomes's goal and took a minute to look around at the very atmospheric Hornets faithful. Considering I am used to trips to grounds where the crowds often struggle to hit triple-figures, it was a strange feeling sitting amongst 20,000 fans roaring on their teams. With a 'Match Of The Day 2' appearance likely from our seating position, it was nice to be finally taking in the spectacle of a Premier League match- even if it was one that would ultimately produce just one own goal, 38 fouls and a late red card. This was my fourth-time watching Stoke City and I think it's safe to say that I have seen some good and bad displays from the team nearest my doorstep. I was present at the Potter's first European group game back in 2011 as they beat Besiktas with a Peter Crouch winner, I then also saw Luis Suarez take them down in the League Cup a month later, before viewing a young Potter's side to Moss Rose to beat Macc in pre-season.
Anyway, enough of my tales of yesteryear, let's go over some of the action here and now on the pitch. There was none! Seriously, the opening 45 (well, the 20 minutes of it we saw) was filled with refereeing blunders, a few good bits of play from Arnautovic, and the odd piece of sloppy passing that wouldn't have looked out of place in my regular outings to the Evo-Stik Divisions. So far, I was underwhelmed by the play and sitting in the home end was becoming as much a frustration as I gelled in with the locals. The anger with the referee's early decisions made the eventual goal feel like Stokey salt in the wounds of the display so far. A whipped-in corner for the visitor's was poorly marked by Watford and after Charlie Adam's header hit the post, the ball then stumbled over the line despite the efforts of Gomes- who would unfortunately have to have his name stamped on this own-goal. Watford 0-1 Stoke. The rest of the half didn't improve much and with some more questionable refereeing causing numerous yellow cards for Hornets players who were seen to be being disrespectful to, it was time for the break and time for us to grab a Premier League pint!


With all the rush of getting in to the match, we hadn't really had time to digest where we were on this chilly Sunday lunchtime. Looking out on to the pitch at stars like England international right-back Glen Johnson and the household names of Troy Deeney and Xherdan Shaqiri, it was amazing to appreciate being just a few feet from players that are idolised by many young fans across the country. Then, on the other hand, I also listened to a couple of "fans" in the queue who were chatting amongst themselves. The woman said, "I don't like that Stoke number 10.", to which the bloke said "Who's that?" and then she confidently replied with "That Antonovic". Obviously true football fanatics.
Unlike our first experiences of top-flight football, the second-half started off with a slight amount of spark and both sides looked ready to give it a try. Watford had secured a 2-1 win last weekend against the Champions, Leicester, so I'm sure Walter Mazzarri's men would be hoping to force their way back into the game. With an hour almost gone though, the tide wasn't turning too much and it was time for the home side to send out last season's top-scorer. To the tune of Spandau Ballet's "Gold", we were treated to a verse of "always belieeeeeve in Odion Ighalo!" as Watford turned to differing attacking options. Stoke continued to hold firm though and with Bruno Martins Indi, one of my favourite players, at the heart of the Potters defence it was looking more and more likely that Lee Grant would be picking up a clean sheet this afternoon. With Nordin Amrabat having a poor game on the wing and more bookings coming for the home side, one angered fan shrieked out "it's a physical game, you nosher!" which raised a rare smile amongst the Rookery Stand. As the away fans were enjoying the drab game at the other end of the ground, it was time to see some action from Peter Crouch in the closing minutes. The 6 foot 7 inch striker played the last eight minutes and even whipped out one of his classic obscure moves with a lanky back-heel that made the trip worthwhile on it's own.

Watford did try to pile on the pressure towards the end but they were eventually caught on the counter and Britos would eventually be sent off for a second bookable offence following a deliberate foul to prevent a potential second goal for Stoke. The final whistle eventually blew and the boos for the referee rained down from the stands as they felt robbed by Robert Madley's display, although in truth I would also say that the Hornets didn't give their best display either and this would ultimately add to the disappointment. We promptly headed out of the ground with the masses of people having completed our first experience of Premier League football. I may not have been all that impressed with the game, but the ground was undoubtedly a fine piece of modern footballing architecture with a good crowd to accompany it. With far from a Crocodile Rock in our stride we passed the Sir Elton John Stand from the outside and waved farewell to another game of football. My 52nd ground is probably one that I'll be visiting again with Will, who lives fairly close-by.