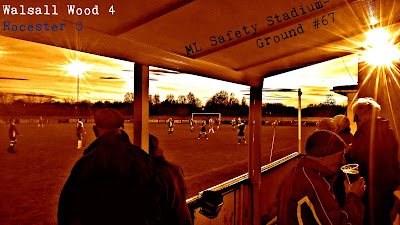 With the football season sadly closing in, a Tuesday night outing to my first game of three this week would see me take on a fairly short ride over to Walsall in search of yet another Midland Football League game. With a rare week of day shifts falling upon me, I decided to take advantage of my newly-found nine til five rota and get on down to my 67th ground and at the same time gather a preview of a Staffordshire side that is on my list of local grounds to tick off.


The village of Rocester is known for being the home of a little company you may well have heard of called JCB, but aside from that it is just one of Staffordshire's quaint little cubbyholes and sits quietly upon the border of Staffs and Derbyshire. It is safe to say that the village's football team, known as the Romans, are fairly well established in the Midlands Premier League but haven't exactly shown signs of making a shove for the next level- despite having success in the Staffordshire Senior Cup back in 2008 with a win over Kidsgrove Athletic in the final. The Wood, on the other hand, have had one stand-out adventure in recent years as they made it all the way to the quarter-final of the FA Vase in the 2012-13 season, before eventually losing a replay away at Guernsey- and that must have been some away day!


This season had been so far proven to be a bit of a damp squib for both sides, who sat in 14th and 17th respectively before the kick-off tonight. The Wood had 44 points to start the day with and were in the midst of a good old survival scrap, which went as far down as 20th placed AFC Wulfrunians on 41 points and right up to Boldmere St Michael's who were 12th with just 48 points. A win today would take them above their opponents, meaning that we should be in for a tough fight all-round. My pre-match prediction today was for a 2-1 victory in favour of the home side.


With my drive only taking 40 minutes or so from Stafford, I had arrived at Walsall Wood's ML Safety Stadium with plenty of time to spare- always a bonus when you have a hankering for a cheeky pre-game beer. Plenty of grounds I've visited in the non-league do have the odd quirky feature to boast, which is what makes them so memorable on my groundhopping ventures. Whether it is the gorgeous scenery overlooking Matlock's Causeway Lane, the giant Thurrock Hotel sitting over Ship Lane, or the Aspray Arena's delicious "442 Bar", there is quite often a feature-piece that I enjoy taking in before the game- and today's ground can only be described properly as being the back garden of a KFC! Nope, I'm not even joking, the ground literally sat behind the Colonel's car park and will now therefore be ingrained in my mind as being the one at the back of KFC- sorry lads! I swiftly entered the ground after a brief interaction with the nice chaps on the turnstile and apart from the picturesque sunset looming over the West Midlands, my eyes were also drawn straight towards the delightfully long-lived Geoff Woodward stand. I won't dwell on it too much, but I do love a good grandstand and with wooden panelling lining this non-seated build it was a joy to behold as one man put up his "For The Good Of The Wood" flag.


Call me a romantic but on my travels I have come across so many grounds which have adapted the modern-style stand, so it is always a pleasure to see a modern day relic like this stand- especially when you don't know how long they may last for! Round at the other side of the ground, I found myself at the bar, just for a change. The decent-sized clubhouse was attended by many a fan, with some having a catch-up and others watching the build-up to Juventus vs Barcelona. As the weather was still decent at this stage, I grabbed myself a pint and headed back outside to scout out potential star-players during the final part of their warm-up. I won't lie and say that I picked out the next Jamie Vardy or Troy Deeney, and instead I found myself reading up on the previous results wondering who would have the edge in this important tie. The reverse fixture back in October was a 3-2 victory for the Romans, but a big 1-0 win this weekend for the Wood over fellow strugglers Long Eaton United has given them the confidence to crack on and pick up a few more crucial points. Rocester, on the other hand, had stumbled through a goalless draw with relegation candidates AFC Wulfrunians on Saturday and it's safe to say that with anybody capable of beating anybody at the moment in the MPL, it was well and truly game on.


The game started off with an early goal and it was about as sloppy as they get from the away fans point of view- not that Joey Butlin minded, his scuffed volley barely made contact as the ball came in on the right and it found its way into the net. Wood 1-0 Rocester. The shaky start by the Romans was noted by Walsall Wood and they looked to kill the game off early, and on 8 minutes they missed a glaring chance as the Wood's left-winger missed an open goal. The number 11 obviously couldn't believe his luck as the ball bounced over the Rocester defender and keeper, but the end result was that the lad had his face in the grass as his shot flew wide. Whereas the footballing display was less than pleasant from the visitors, I must make a note of how fond I was of their blue and white kit- one I'd certainly consider purchasing to add to my collection.


With 20 minutes now reading on the Ref's watch, the away side finally looked likely of getting into the game as the impressive number 11 worked his magic out on the right-wing before cutting inside and unleashing a sweet strike that soared just past the post. The talented winger tried this a couple of times on the rare Rocester counters and looked fairly threatening on the offence- clipping the crossbar with his next dig. At the other end though, the Romans keeper wasn't doing himself much justice between the sticks and after dropping a shot into Butlin's path he could've almost had a brace, but as with his last error in judgement this one was not punished. Another goal was to come before half-time though, and it would be Butlin again on hand to poach the goal. His header from close-range was well-taken and with that the crowd were treated to a large, singular roar from one thrilled local in the Woodward Stand. Wood 2-0 Rocester. Usually I do try and keep track of bookings in a match too, but those of you who may have been there will sympathise with me in struggling to keep track of it all. As one Rocester player was muscled out and reduced to the floor, a rowdy fan in shorts bawled out to him, "this ay' the Premier League, mate." As more than a couple of players went into Mr. Corbett's book just before the break, Rocester went in two down and with everything to do in the second 45.


I quickly popped in to grab myself another beer, at which point I got chatting with the lass on the bar. After serving me my Lager in a glass, I pointed out to her that I would be taking it outside with me. She looked at me and told me "a pint in a plastic doesn't quite taste right somehow. A bit like a cuppa, you need it in a china cup". I think I'm in love!


The second-half started in a similar fashion to how the first had ended. Despite the temperature in Walsall dropping as darkness fell upon us, the pitch remained pretty hot as the players continued to draw many a foul in a very stop-start 45 minutes of football. As the Rocester left-back took a rough tackle from a red-shirted foe, one moment of relief was when the "physio" (I use this term loosely) ran on with just a water bottle to attend to the floored defender's ankle. Clearly he did his magic as the lad limped on for the rest of the game, but Walsall Wood were still eyeing a couple more goals and they pushed on in the final half an hour. A free-kick was lobbed over a crowded box from the left to Louis Harris, and he took the ball inside before clinching the game with his side's third goal. Wood 3-0 Rocester. By this stage the few travelling fans, including one man who seemed to be wearing Dr Seuss's Cat in the Hat's hat, were getting very frustrated by the referee and I think also their team's detached performance. One man picked up on a tumble by two-goal Butlin and shouted out, "it's like watching the Italians", which was ironic because in the clubhouse Juventus were also 3-0 up against Barca!


There was a fourth goal to come for the hosts and even a couple of red cards in the final 10 minutes- talk about action. With the Rocester side already deflated, Walsall Wood added a fourth goal as Lewis Taylor Boyce got in on the act from the bench and he hit home a good strike on the counter to end the goal glut. Wood 4-0 Rocester. The substitute striker for the opponents didn't quite have the same effect though, and he was sent off for a second bookable offence on 87 minutes. As the shorts-wearing twosome shouted "get off, fat arse", the Romans were now down to ten- and in stoppage time it would be nine as the hefty centre-back was given his marching orders for his second yellow- which I didn't really see what it was for.


The game ended 4-0 meaning that it was an all-in-all great day for the Wood and as if to rub salt in the wound of the Staffordshire side, the Wood jumped up to 14th and took over Rocester in the process. A tough trip to Coventry Sphinx is next up for the Wood, meanwhile the Romans will look to look to bounce-back at home with a very tough tie at home to high-flying Lye Town. And for those of you wondering if I popped in for some chicken before embarking on my journey back to Stoke- of course I did, it'd be rude not to!
Posted by Daz Knapton at 09:51