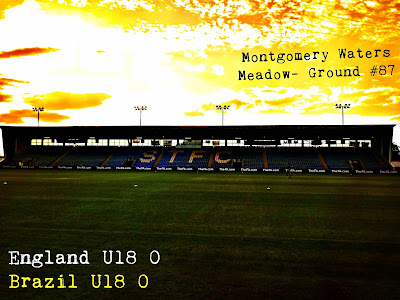 The international break is always odd when it comes so early in the season, especially whilst also at the crucial end of the transfer window, but with England's Under-18 side just a month away from their trip to India for the Youth World Cup this was a good chance for the Young Lions to gain momentum in time for what will hopefully be another successful campaign for one of our junior squads. With Brazil making the trip to Shropshire for this one, I had no excuse to miss this warm-up match and so I hopped in my little red car and headed over to Shrewsbury for a debut visit to Montgomery Waters Meadow, the home of the League One club who call themselves the Shrews.

An out-of-town ground, the Monty Waters Meadow is your bog-standard modern Football League stadium and compared to some of the more characteristic- aka old- grounds I've visited at this level, I found myself impressed by its neatness rather than inspired by its mishmash style and cobweb covered old stands. After trips to Roots Hall, The Mem, The Bescot and Fratton Park at this level, it is safe to assume that I would struggle to find too much of note to talk about at this stage. It is an ideal location for this kind of international fixture and I was pleased to see the Midlands being used again as a hub for the English junior football scene, having visited Burton's St. George's Park and Walsall's Bescot Stadium for other England matches last season. I was no stranger to football at this level, so as I arrived at the ground an hour before the 7pm start time, I headed into the Club Shop to start my survey of Shrewsbury's facilities.

After resisting the temptation to buy one of last season's tops for a tenner, I made my way into the ground to watch the sides train whilst scoffing a steak and ale pie. Time soon passed and after receiving the team sheets for the evening I studied the web to find out a bit about the players on display tonight and also guess whether or not the next Ronaldinho, Neymar or even Roque Junior would be taking to the field tonight. I like to think that in 10 years time when one of these young Brazilians makes a £497m transfer to Man City, I can look back on this day and think "ha, I remember seeing this lad play at Shrewsbury Town against the current centre-back for Grimsby Town". Joking aside, the majority of the England squad are already in the top sides in the country with the likes of Curtis Anderson and Joel Latibeaudiere representing City, Marc Guehi and George McEachran coming in from Chelsea and captain Angel Gomes being a United lad. Over in Brazil's camp, all of their youngsters come from clubs of their home nation too and the potential megastar I'd picked out was Brenner Souza da Silva, who has already made an appearance for Sao Paulo despite being born in this millennium!

In the end 1,876 were in attendance for the match and with 10 minutes to go the stand was starting to fill out a bit more. I made my usual pre-match prediction and went for a 3-2 England win- which was optimistic at best, this is England after all! Just 45 minutes before Kane and the gang kicked-off in Malta, we were underway here and it was not until the half-hour mark that the first chance came, despite much pressure from the hosts and in particular the wing-wizard Nya Kirby. A cleverly worked free-kick eventually led to McEachran hitting a shot towards goal, with the ball being deflected ever so kindly into the path of Rhian Brewster upon the 6-yard line. The Liverpool starlet couldn't quite get his shape right though and he practically missed the ball all together as his big chance went begging. Shortly after this Brazil had the first shot on target of the match, as Luan Pereira hit a Júlio Baptista-esque strike directly at Anderson in the England goal and thankfully he was more than equal to the thunderous drive. As the first-half came to a close, the main observation I had made was that no matter what level they play at, a simple clearance is not in the blood of any Brazilian. The lads in yellow looked at their most comfortable throughout much of the game when the centre-backs were in possession and they continued to pass the ball out of their own danger zone when a simple boot up field seemed to be the sensible option.
With my usual half-time hankering for a pint I managed to negotiate my way into the clubhouse, despite not having the required wristband, so that I could basque in the glory of an ice-cold Grolsch amongst a load of folk in suits who were enjoying their tap water and token onion bhaji from the fancy buffet laid out. I, on the other hand, made the most of my newly found position amongst national coaches and England officials and tucked in to a handful of piping hot chicken nuggets and a couple of cheeky sausage rolls. Fully replenished and a little on the bloated side, I headed back out for the conclusion of the game.

The second-half offered no goals either, but there was a few decent chances at either end in a more open bout on the field. Palace youth player Kirby continued to be the key player as he switched wings with freedom and showed off his excellent range of passing. After scuffing wide a half-volley on the hour mark, the opposition number 11 and aforementioned Brenner started to try his luck with long-range efforts that were high, wide and all but handsome. The subs came on for both sides and with an even second-half, Brazil seemed happy to try and settle for a winner on the counter, with Alan striking just wide after a good bit of build-up on the right.

With this being a development friendly encounter, the final whistle from the Ref would never have been the last action of the game. It was announced beforehand that a Penalty Shootout would happen tonight after the 90 minutes as both sides looked to take advantage of a rare chance to play out a proper shootout. Kirby and Lincoln stepped-up first for either nation and scored, with the Flamengo striker opting to celebrate his tidy strike with a dab. England's keeper then stepped up and scored the second for the Young Lions before then expertly saving the effort of Helio Junio. Loader, Foden and Guehi all scored for England as did Henrique, Weverson and Alan, which meant that I was able to add myself into the rare group of people who have seen an England National Football Team claim victory in a penalty shootout. Yes, it may well have been a friendly and it was our youth side, but I'm marking this down as a good way to end my trip to Shropshire for this goalless encounter.