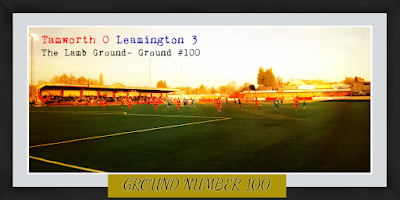 So here it is, Saturday 23rd December 2017, also known as the day that I visited my 100th Ground. The centurion is something that I'd set myself a target of achieving by the end of 2017 and although I left it pretty late to get there, I must say that I'm pretty impressed with the 47 ground haul that I've managed this year. Throughout December I have been thinking of making a big deal of it, with ideas of seeing the Etihad, Turf Moor or Anfield to mark the occasion, but in the end I felt like I just needed to get on with it and so I asked for cover from my afternoon shift to get to a game. My initial plans were scuppered early in the day when a potential free ticket to Villa Park vanished into thin air and with few games to choose from in the area, I decided I'd make the ride down the M6 and across the A5 to a ground I'd been toying with visiting for a couple of years now- The Lamb Ground.
Tamworth Football Club are known as The Lambs and it is at the Lamb Ground that the Staffordshire side have lived in since shortly after their founding in the mid 30's. Some of you may remember a few decent FA Cup runs they've had since the turn of the millennium, but aside from that they have existed as a National League side, with many a season in the Premier and the Northern divisions. Following their most recent relegation at the end of the 2013-14 campaign, Tamworth have had three seasons of finishing just outside the playoffs and are still ambitious to make a return to the non-league's highest branch. Leamington on the other hand have just made it into the National League North after finishing runner-up behind Chippenham Town in last season's Southern Premier League, but that certainly hasn't stopped them continuing to progress as they started the day hoping to climb away from the drop-zone. The Brakes may have been 9 points off Tamworth before play began, but they would no doubt be looking back to a 2-3 away victory over leaders Salford City as inspiration and with expecting a close tie, I predicted a 0-0 draw for this one- surely it couldn't be a classic for my 100th, could it?

I finished work in Stafford at 2pm on the dot and by the time I crossed South Staffs it was just about time for kick-off. The ground is located right in the heart of a housing estate in Kettlebrook and can be seen from the Snowdome, and so I parked up on a side street and started to mooch over with the last few stragglers. Entry was priced at £12 for today, which I thought was fairly reasonable considering my last trip to Kettering's Latimer Park in the league below was a tenner and whenever I go to National League Premier matches it tends to cost me a whopping £17-£19. I stepped through the turnstile just in time for kick-off, and I was pleasantly surprised with the scenes that were unfolding between my eyes. Painted in a bold red coat, the majority of the roof was covering concrete standing areas and one fairly modern looking main stand that provides the only seated area at The Lamb Ground. The away fans had already taken over a fair chunk of the only non-covered section of the ground and there were a couple of food huts on-site too. If I were to categorise the ground in any way, I would say that it is a typical non-league venue with a lot of character and some decent viewing areas all-round, and for me it is what you would describe to people if they asked what a football ground was like at this level. Prominent colours, the smell of burgers, a good sprinkling of fans and clutter crammed into every corner and crevice surrounding- a much happier and familiar place for me than the generic feel of being at most Football League stadiums.
On the field, the game started at a reasonable pace and both sides showed signs that they could play a bit. As the away fans continuously chanted "Ohhhhhhh Lemmy, Lemmy" it would be Callum Gittings who almost got the opener on 9 minutes, but he was only able to slide his effort wide as a desperate Stephan Morley tracked back for Tamworth. Once the Lambs got the ball moving on the astro-turf pitch they looked pretty good themselves and the play-off chasers carved a half-chance on 12 minutes- this time the shot on the edge of the area would be high, wide and not too handsome. The hosts did continue to press in the opening stages and after Darryl Knights pulled out a flick that Neymar would have been impressed with to release Zack Kotwica, the midfielder then ran in on goal before eventually hitting a poorly composed strike straight at the well positioned keeper and captain Tony Breeden. Amongst these chances there was a few rough challenges going about too and after two bookings in as many minutes for either side, I was finding myself at the heart of a proper game of footy and the opening goal was just around the corner.
With the half-hour mark surpassed it was former Notts County forward Colby Bishop who pulled out a great goal as he fired in a 25-yard rocket that flew into the net in front of the rapturous away support. Tamworth 0-1 Leamington. The yellow and black scarves were waved as the fans piped up again, this time with a round of "One shot, One goal. One shot, One goal!" as Tamworth restarted the action. An injury to an away player had forced an early change to the side for Leamington and it would be Ahmed Obeng on the left-wing who would make a crucial chance just before the break. The number 14 ran down the left-wing with only a cross into the box on his mind, and when he eventually picked out the pass it was expertly placed in to Gittings who simply couldn't miss from inside the 6-yard area. Tamworth 0-2 Leamington.

With Leamington showing a crucial and cutting edge thus far, the break gave fans from both sides time to reflect on a slightly unexpected scoreline to this point. To do this, I plonked myself in the thick of it amongst many heavy drinking fans in both red and yellow, ready to sample a pint of my own. It was nice to see the bar rammed with people and with the added delight of both sets of fans mixing and exchanging conversation, I supped my beer before heading back out for the second half. With the cool air drawing in the night, I decided to jump in the long stand running across the opposite side to the main stand and soon after kick-off I realised that this was where the noisy home fans were housed. With not much to shout about for the home lads, they turned their attentions to festive frivolities by singing a full verse of Rudolph. The good will and fun nature amongst the crowd soon turned back to brief silence and disappointment though as Bishop was gifted another chance which he took after rounding the keeper easily to create himself an open goal. Tamworth 0-3 Leamington. The collapse at the back for the Lambs was compounded by the fans who piped up again with a round of "we're shit, and we know we are" whilst the away fans cheered an easy three points with still half an hour to go. Connor Taylor would have a decent chance towards the latter knockings, but his quickly taken shot summed up the host's day to be honest. The 708 in attendance had a fair spread of home fans and they did continue to cheer on their side, but it was one man stood a few meters to my left who kept me entertained as he continued to shout out the word "clueless" after every failed attack, waiting a beat before then repeating the word in a louder and longer-drawn tone.

The main positive I can report from the day was that Dexter Walters, a second-half sub, was a shining light amongst an otherwise dull offensive outfit from Tamworth and the young left-winger showed some awesome skills down the flank, beating Leamington's Richard Taundry on every occasion they faced up. He showed some flicks and tricks that reminded me of Justin Kluivert and if the lad picks up a bit from the experience of National League North football, I predict that he'll go on to bigger things and maybe even the Football League. As it was for this afternoon though, his efforts would be fruitless and despite a lot of late pressure we were to see no consolation goals from the red-shirted Lambs. I stuck around for a few minutes to clap both sides off and I continued to applause as the Leamington players approached the away fans. Having known little of the visiting side today, I must say I was very impressed and I'll look forward to eventually getting over to the New Windmill Ground.