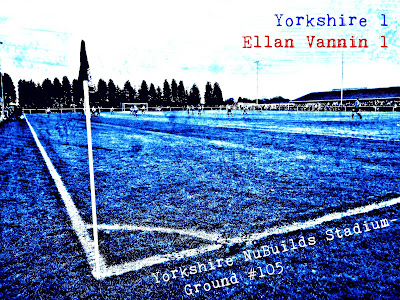 It's not every day that your home county forms its own National Football Team and with CONIFA's decision to add Yorkshire as the newest member of the independent football associations group, which includes the likes of Africa's Matabeleland, the French-Canadians of Québéc and even Northern Cyprus, it was finally the day of their first ever fixture and they would welcome nearby Isle of Man based side Ellan Vannin over to God's own county for some international football at Hemsworth Miners Welfare's ground, the Yorkshire NuBuilds Stadium.

For the side travelling over to mainland England today, this friendly match was an important piece of preparation for the squad as they prepare for the upcoming CONIFA World Cup, in which the Celtic nation outfit will come across Barawa, from Southwestern Somalia, Tamil Eelam, another island side based in Asia, and Cascadia, one of the small villages from Game of Thrones. Although this was Yorkshire's debut on the world stage, the aim for the newbies will of course to be a successful qualifier for the next World Cup and in playing the 4th ranked side it would be a good gauge on how they are likely to get on in their future endeavours. So far the game had been given plenty of pre-match build-up within the local and global news channels, with radio interest coming alongside many clips on ITV Calendar and the likes to try and get people to come out in their droves to cheer the team on. The average attendance for one of the Hemsworth League games is just 127 so when I arrived at the ground to see lots of people flocking towards the turnstile I was pretty excited to see the turn out. Coming over from Stoke-on-Trent myself, this would have been a bit of a damp squib in front of just a couple of the old regulars in 1990's Leeds United tops.
Proudly donning my national shirt, cheers again to my Nan for this particular crimbo present, I entered the ground with my not-so-Yorkshire girlfriend Sophie and we were instantly approached by a BBC Sport Radio team who were after a chat with me about what it's like to be a Yorkshireman. I give a couple of minutes of fairly awkward interview chat, nothing to rival my 45 minute encounter with "The Rev" at Park Hall, before heading into the smart little clubhouse bar for an early pint and a chance to have a bit of a natter with a few lads who'd come from Beverley and other parts of the county for the game- one lad also told me he'd drove 3 hours to be here, but didn't specify where from exactly. We then wedged ourselves back outside for a bit of fresh air and a chance to walk around the pitch to see what both the ground and two sides had to offer us on this mild but drizzly afternoon in Fitzwilliam. The ground was fairly identical to the Lancer Scott Stadium in South West Bristol, and with just a hundred or so seats on location the ground mainly relied, for today at least, on fans being able to lean upon the white metal surrounding the pitch. One side of the pitch housed the bar, the other was the location of the seating, and there was nothing aside from a few overlooking conifers behind one of the goals. Basic, but it does the job. As for the pitch, I think it would be fair and not too unkind to say that it was in a "mid-season" state that would see the surface looking okay and the goal-areas seemingly more muddy from the efforts of Northern Counties East Premier sides over the season.

With the ground given the old once over, we started to observe the two sides warming-up and both seemed in fine fettle before the game. In the Yorkshire starting XI we would be treated to the likes of a National League North man between the sticks, in the form of Ed Hall of Bradford Park Avenue, and routing through the team there were many Evo-Stik Northern standard players from Ossett Town and Ossett Albion in the Northern division and then from the Southern division Frickley Athletic and Stocksbridge Park Steels lads lined up- Jamie Vardy, Danny Rose and James Milner were all snubbed on this occasion. For Ellan Vannin, the manager Chris Bass had made his squad from the top five teams in the current Isle of Man Senior League season and although I knew of none of their players, I picked out Sean Doyle as my pre-match danger man for the island side- mainly because he was the only lad there who was representing the side who sat top of the league. The number 16 forward from Corinthians AFC was to partner the IOM League's top scorer Ciaran McNulty and incredibly the two combined have 45 league goals with only 14 league games played so far over there. Kick-off loomed by this point and as Sophie and I took our seat in the busy, albeit limited, seating area we were soon ready to be joined by the 22 players and over 600 fans for the moment we've all waited for.

As the match got cracking, Yorkshire started on the front-foot and with some good attacking movements forming amongst the side who'd only trained together once before today, the only thing missing was the killer ball. With 10 minutes played the first big call of the day was made and after consultation with his linesman, Steve Lynch awarded the home side a penalty and it would be Sean Ripley who stepped up to take it. With the weight of the world on his shoulders and the chance to write his name into the history books, the number 9 placed a poor penalty into the corner and on this occasion part-time giant goalie Dean Kearns got across to save it. Yorkshire continued to play well though and after a couple of set-pieces went close, Andy McManus headed just wide and Richard Collier shot across goal from out wide. Over by the sideline, the raffle tickets were being sold and despite the prizes including a pack of John Smith's and a box of Yorkshire Tea, I resisted the temptation and firmly kept my attention on the field as Ellan Vannin went close on the 20th minute. Shortly after this a resurgent Isle of Man side came very close and when a 35-yard bullet strike from midfield whistled towards goal, it took a great stop from Hall to keep the game level for now. Just before the break we edged our way around to the bar in preparation for a thirsty half-time and at this point we saw McNulty go through for the visiting side in red only to see his lob effort caught out by Hall again as Yorkshire rode their luck a little bit in defence. The Ref called for the end of the first half and on reflection everyone seemed pretty happy with the game so far- for us the best play was being made from the wings and as the full-backs supported with pacey attacks we looked likely to grab a goal at some point. In the centre we seemed a bit disjointed but captain Pat McGuire and Adam Hayton both had potential to pull the strings if the mood was right. There had been some tasty tackles too and despite lacking in size against a very tall Ellan Vannin squad, we certainly weren't being out-muscled.


Back outside with a fresh pint, the match soon restarted and as the cold settled in I was forced to pull out a jacket as the darkness grew around us. Ellan Vannin had made a half-time change and 17 goal striker Furo Davies, club partner of McNulty, joined the game as an additional man-mountain target man to try and rattle the defence. Just two minutes into the half and the plan of Chris Bass had worked, as a cross came in from the left to Davies, who used his forceful way to shrug off the opposition, control the ball and then half-volley a well hit drive onto the underside of the bar and into the net for the game's opening goal. Yorkshire 0-1 Ellan Vannin. This wake-up call seemed to be just what we'd needed after a slackening off in pressure and we soon found ourselves going forward for the first time in a while. With 53 minutes now gone the ball was at McGuire's feet and the skipper looked up before clipping over an excellent defence-beating pass to a pacey run from Jordan Coduri. The Penistone Church striker managed to get on to the ball well before applying a perfectly placed left-footed strike which beat Kearns and went into the net- a moment that the Halifax lad will never forget for the rest of his life. Yorkshire 1-1 Ellan Vannin. From then on the game would remain a stalemate and despite Furo Davies looking very threatening for Ellan Vannin, he could not double his tally and ruin the big day for Yorkshire. Joey Quayle also went close at the death fro the visitors but ultimately the game ended all-square and on the basis of both sides having prolonged spells of dominance I'd say it was a fair result.

As far as I'm aware there are no firm fixtures booked in for the Yorkshire boys going forward, so it is probably more likely that my next CONIFA match will in fact be when I travel down to London for the World Cup in June. After today's bout I'll definitely be supporting Ellan Vannin and after they brought a true battle of the vikings to Yorkshire, all that's left to say is that I am proud of both sides for putting on an entertaining and historic game of football. Cheers lads!
Posted by Daz Knapton at 02:10