Non-League Grounds of Staffordshire- The Pint of Football Top Five

Non-League Grounds of Staffordshire- The Pint of Football Top Five!

Ever since I started groundhopping back in 2015 I have always tried to support as many local teams as possible, which has naturally led me into visiting many of the county's top stadia... and even a few muddy fields disguising themselves! Yes, that's right- in my 29 Staffordshire grounds visited to date, of which 26 are non-league, I have been everywhere from Stoke City's Bet365 Stadium for European Football, to my most local ground in Florence to take in some local Staffs County League action. Despite being a proud Yorkshireman, I can't help but admit that I've fallen in love with my adopted county and the footballing delights it offers. My Bracknell-based fellow footy fanatics over at "Football in Bracknell" offered me the challenge to name my top five non-league grounds in the area and of course that's what I'll be aiming to do in these next few paragraphs. Personal feelings aside, I'm gonna try and be objective as I look to pick the best ground out there. Wish me luck! 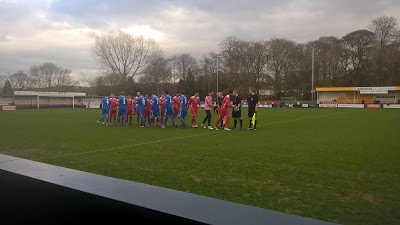 I begin my search for Staffordshire's finest ground in north Stoke-on-Trent, where I teeter on the border of Cheshire in Kidsgrove and it's Evo-Stik Western Division side, nicknamed The Grove. On paper, the club isn't too much of a special case and having played at the same level for seventeen consecutive years they don't feature much in the great rises nor falls of non-league clubs. That's not a bad thing though in my opinion and the club's mediocre stature should also be considered as a credit to the consistent stability at the Novus Stadium. 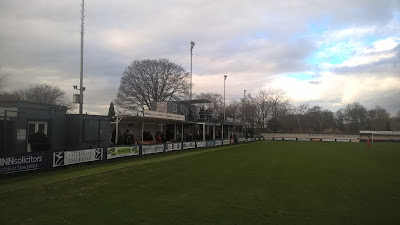 There must be something that has attracted more than just myself to be involved with The Grove and with the likes of former Watford star and Jamaica international Lee Williamson on their books, alongside local footballing hero Ant Malbon, the real appeal for me here is the club's community feel. On both of my visits to the Novus Stadium, where World Cup 2006 star Chris Birchall also spent some time, I was very impressed with the club in terms of offering a friendly and inclusive experience. Is it the best club in the land? No. Does the ground compare with the likes of some other Evo-Stik facilities? No. Is there a better place to watch a game of football in a comfortable ground, with local supporters and community values in abundance. Certainly not! Kidsgrove was also the first club to spot the footballing talents of Macclesfield Town forward Nathan Blissett during his time at Staffs Uni, which in itself makes them a legendary club. 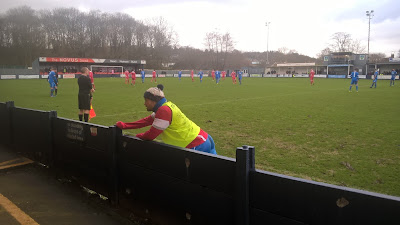 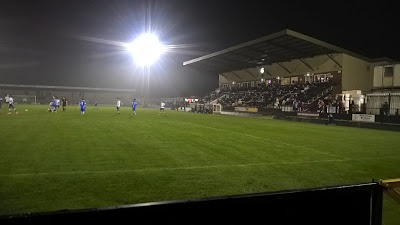 I now jump from the very north of Staffordshire to its most southern reaches in my search, which can only mean that I'm in Cannock and more importantly Hednesford, the home of the hefty travellers who are known as The Pitmen far and wide. Their ground is the very impressive Keys Park and it is placed in my top five county grounds based on the fact that it a very impressive facility that should really be seeing National League football. 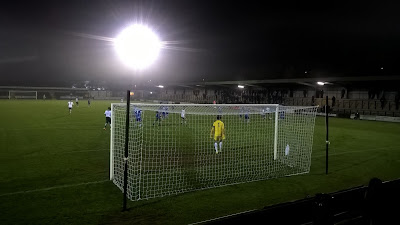 The former Conference Premier club is one of the strongest non-league outfits in the region, but it is the ground itself which is the real draw for me. I visited Keys Park on an icy, foggy, dreary Halloween Night back in 2016 and was instantly impressed by the clubhouse and adjoining function rooms that complement the late nineties structure which has been lucky enough to see teams visit from the National Leagues, as well as the Northern AND Southern Premier League. The club has spent its last two and a half seasons languishing in the lower depths of the Evo-Stik Premier League and despite averaging the best part of 400 fans a game, they could easily be a League side thanks to their impressive set-up. Over 4,000 people crammed into the ground back in 2013 when the Pitmen beat FC United of Manchester in the Northern Premier League Playoff Final and I'd like to think that when Keys Park is rocking, it is one of the best places to be when watching non-league football. 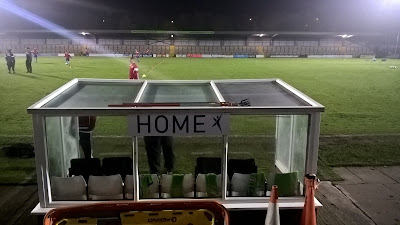 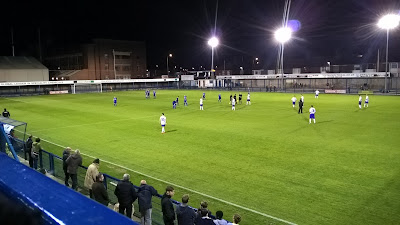 As with the ground ranked in number five, this one is yet another member of the newly restructured Evo-Stik Western Division and with international pedigree of its own, Harrison Park is a worthy contender for being one of Staffordshire's greatest. Leek's very own point of pride, a 3,600 capacity ground which has hosted many England Youth Level international matches, is also the current home of Stoke City's Under 23 side. 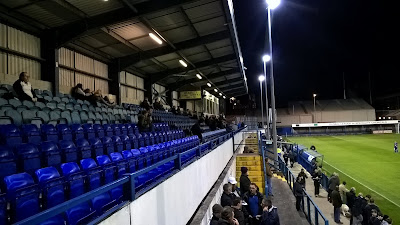 With the late great Eric Bristow being a big fan and often guest of the club, Leek Town's Harrison Park is a fab ground and has one of the best viewing stands I've come across at this level. The main stand is risen above the pitch and supported by cement steps up to it, with an old school corner bar clubhouse over to its left. I've been to Harrison Park twice and would not hesitate to revisit it with any groundhopper who is willing to take a punt on my highest of recommendations. The ex-Conference side these days has to settle with less than 300 average gates, but with a strong campaign in 2018-19 so far I wouldn't be surprised if the Blues made their way back into the Northern Premier League sooner rather than later and with the links with the national setup and the Potters junior side, the sky is the limit for Leek Town and the only drawback with progress here would be the lack of space at the north end of the ground, which inconveniently backs directly on to the very busy A523. 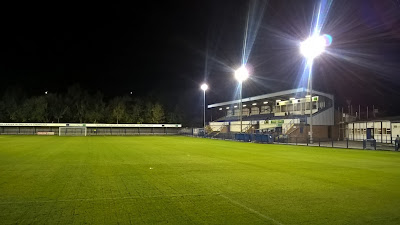 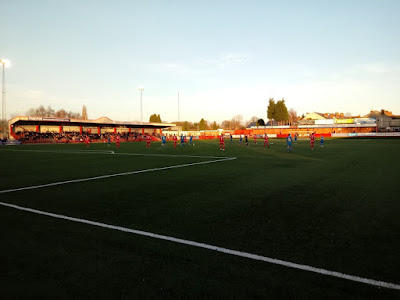 Last year as I approached my significant 100th ground, the choice was made by myself to check out another local delicacy and this time it would be East Staffs, and more specifically Tamworth, where the Lamb Ground would have the honour of being my centenary stadium. At the time of my visit, Tamworth were a struggling National League North outfit but with it falling in the festive season I was treated to a well-attended affair in a sturdy old ground full of excellent seating and standing areas alike. 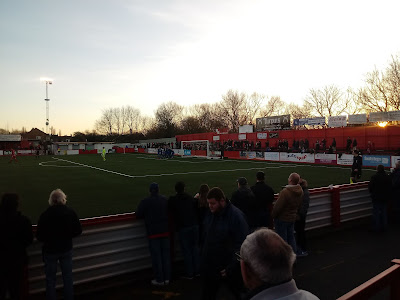 To put it in context, the Lamb Ground is one of the great historic non-league grounds and since its opening in 1934, Tamworth have lived there through thick and thin in their 4,500 capacity ground. Last year's relegation aside, there have been some great matches played here and although I remember it as being the ground where I saw Leamington beat them 0-3, many will remember the FA Cup runs, the 2009 Conference North League triumph and their record breaking attendance back in 1948 against Atherstone Town. The fans on the day of my visit were nothing short of brilliant and they did their best to fill the Lamb Ground from all four sides. Red painted walls, seats and roofing are as memorable as the simple but atmospheric behind the goal standing cement tiered area, whilst the well-maintained bar area in the clubhouse serve up a tasty half-time pint to top off an all-round brilliant groundhop for anyone passing by. Of course Tamworth are currently in the Southern Premier League, compared to the other four grounds I've selected who are in the Northern equivalent, and they are currently fighting against the likes of Rushall Olympic and Redditch United in mid-table oblivion. 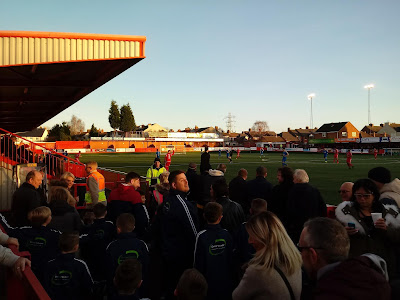 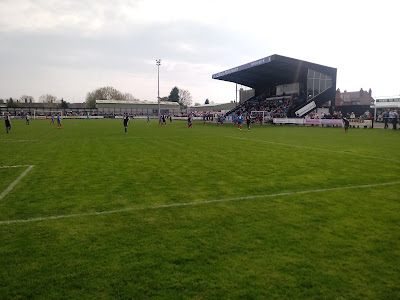 So, here we are at the official Pint of Football top ranked non-league Staffordshire Football ground- also known as Marston Road in Stafford. Home of Evo-Stik Premier League side Stafford Rangers, this one has the right amount of history, infrastructure and fan support to be known as one of the finest at this level in any area of the country. The county town is in fact home to three reputable non-league sides, with Stafford Town and Brocton both playing fairly nearby, but if you ask any Staffordian who is the best team in the land, they'll raise their fists to the air and shout "up the Boro" in support of Steve Burr's side. 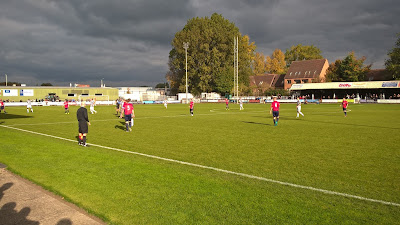 In my hat-trick of visits to Marston Road I have seen some great football in both league and pre-season encounters, but Stafford Rangers don't just boast a strong team- they've got the scrap books at the ready to tell you all about what a fab club they've had for over 130 years. With everything from FA Trophy success in the seventies to eleven triumphs in winning the Staffordshire Senior Cup, the 05/06 Conference North victors draw the fourth highest average crowd in their league- which is good going considering their less than lofty finishes in the table since winning the Evo-Stik First Division South back in 2015/16. The main stand is as good as any in the division, their legendary historic Shed End is often rammed with their loudest supporters and with one of the best clubhouses I've come across, I am pleased so crown this one as my number one. As with many grounds wedged in the town's community, Marston Road doesn't have much capacity for expansion and it has often been suggested that Rangers may look to move over to Town's facility, Evans Park, in the future to build on their impressive work in building up the site on Riverway. For me, I'd rather they stayed at Marston Road and continued to maintain their home of over 100 years as they search to eventually make it back into the top tier of non-league football. 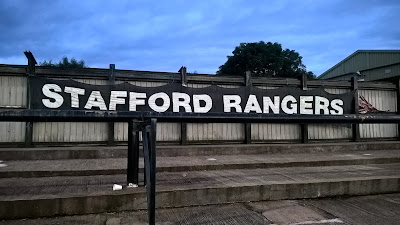 I hope you enjoyed reliving some of my favourites and if you are ever in Staffordshire I would urge you to give at least one of these grounds a go. The Novus Stadium, The Lamb Ground and Marston Road are all within one mile of their town's respective train station and all five offer ample parking. As I depart from my thoughts now, I leave you with three other great local grounds to check out too- they weren't quite in my top five but I found it hard to leave them out completely!