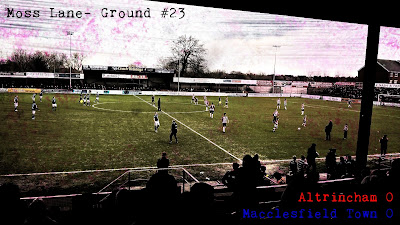 In memory of my Dad, David Knapton, who passed away on Tuesday 2nd March, 2016. An avid Liverpool fan and a believer in all things Stevie G, my Dad loved football and it was one of the things that made us so close. I remember watching some great games with him and some terrible ones too. The David Beckham free-kick vs Greece in 2001, the 2005 Champions League Final in Istanbul and Portugal knocking England out of the 2006 World Cup on penalties were just some of the highs and lows we witnessed together. From the emergence of true Liverpool characters such as Peter Crouch, Djibril Cisse and Emile Heskey, to some unforgettable moments like the infamous Djimi Traore own-goal and of course Jerzy Dudek's penalty heroics in 2005, we witnessed them all together. R.I.P Dad.

A rare weekend off from work usually has an unfortunately clash with a Macclesfield away match that I am unable to attend, so I was pleasantly surprised this Saturday to see that the game was a local derby against fellow Cheshire side Altrincham. A team hovering above the relegation zone partnered against an away team that have just one win so far in 2016 would probably be enough of a sign to most people to stay inside in the warmth. Not me, my friend Will or our girlfriends though, who made the drive from Stoke-on-Trent to the Greater Manchester town in search of a classic. The last time my girlfriend watched a football match was a 7-1 pre-season victory for the Silkmen, but that was always going to be a big ask of two out of form teams. My pre-match prediction was a bore 1-1 draw which wouldn't particularly help either side at this crucial stage of the season.
As the match was a local derby, I was expecting a decent crowd, a rowdy atmosphere and hopefully 3-points for the Silkmen as they aim to put to bed a poor run which has seen them fall from the play-off places into mid-table oblivion, as well as being knocked out of the FA Trophy by Torquay United and the Cheshire Senior Cup by Cammell Laird. Altrincham on the other hand would love to swap places with their local rivals to prevent the agony of relegation, but they have found it tough this season and a host of loan signings throughout the campaign have not been enough to prevent them from finding themselves at the wrong end of the table. As we arrived at Moss Lane, not to be confused with the Silkmen's Moss Rose, I instantly noticed a larger than normal amount of police presence. Later on whilst browsing through the programme, I learnt that in the past this fixture had provided trouble amongst the two sets of fans. I must admit that I was slightly surprised to read this, as I hadn't honestly come across a bitter rivalry at this level. And perhaps more surprisingly upon my arrival to the turnstile was that the seating wasn't segregated. When I asked the question to the chap in the booth about where away fans should go, he just said "it's mixed seating, you can sit wherever." which I can't say was a disappointment to me as it meant I could get a decent seat in the main stand rather than standing by the goal in the freezing gusts and stop-start rain.


As I stepped into the ground my first thought was the poor pitch conditions, which was summed-up by Will as being "worse than Brid Town's pitch". In the goal-mouth the away Keeper Shwan Jalal was already blathered in mud and it brought back many memories of playing on similar levels of pitches as a youngster. My second thought was that the main stand was made with wooden panel flooring and it gave a very old-fashioned look to a presumably old-fashioned ground. With over 200 meetings between the Robins and the Silkmen since 1903, Macc had managed to win the reverse fixture back in November by a clear score of 3-0, and as we entered the bar before the game we were just in time to catch the end of another local derby on the big screen. Spurs and the Gunners played out a 2-2 draw which brought a lot of business to the bar pre-match, and also the Macc players who had travelled with the team but weren't playing today. After joining the queue for a pint, we took a seat by the Silkmen lads who were stuffing their faces and enjoying a bottle of water. I was tempted to ask if they were allowed to have a pint if they weren't playing, but I didn't want to be 'that guy' who asks stupid questions to the players. That role would fall to my friend Will after the match and a couple of beers!


With only a minute or so until the kick-off we approached the main stand to take our seats for the game, reluctantly leaving the comfy surroundings of the bar. We got sat down just in time for kick-off and had a decent view of the game. It was fairly high-up towards the back of the main stand, meaning that we had a good view of the footy but not good enough to see the poor quality of the pitch. The match started off as expected, with some sloppy moves from both sides and very few chances falling to either side. Players struggled to string decent passes together and the heavy showers that came and went ensured that there would be an overall unsettled feel to the game throughout. The Macc players who weren't playing today were sat close-by and I couldn't help but wonder if having them on the field may have made a difference. Danny Whittaker and Theo Bayley-Jones are both players that I'm a fan of and on a day where there wasn't much happening, they were the sort of lads you want on the pitch rather than sat in the stands. The first real chance fell to the Silkmen just after the half-hour mark as the away side won a free-kick about 20-yards out. Top-scorer Kristian Dennis and captain Paul Turnbull both stood over the ball and when Turnbull eventually struck the ball it rattled against the crossbar and prevented the first goal from coming. To say that the game was scrappy was an understatement, with gritty challenges and minor injuries coming thick and fast all over the pitch. Macc played for 10 minutes without a left-back, as Fitzpatrick went off bleeding from his head. The ref did his best to keep the game playing, but after a scuffle between two of the players being brought to his attention by the linesman, he couldn't help but stop the game and call for a drop-ball. Just before half-time I overheard one guy say to his mate, "look over there, someone's having an allotment fire". Clearly the action on the pitch wasn't the highlight for some.


With the score level at 0-0 and the rain coming down again I retreated to the bar to join Will, who had already gone to grab a beer and take a seat inside. The football was pretty drab and if there was going to be a goal in the second-half it would be likely to come from a mistake rather than decent football. Josh Ginnelly had been the only decent player on the pitch in the first-half and I sensed that he was the only one who had the potential to break the deadlock. The winger outpaced Andy Halls throughout and he was the heartbeat of all of the Altrincham attacks. The main issue with the play was that he was too quick for his team-mates, meaning that all of his delightful crosses and dangerous runs were unanswered by the strikers as they headed into Jalal's penalty area. An attendance of just over 2,000 Cheshire folk took their seats again for the second-half and we followed suit.


Despite what appeared to be a slight change in tactic from the home side, the second-half started in the same way and Ginnelly, who was now on the right-hand side, was still the only bright spark amongst the dull display. The Robins target man Michael Rankine was winning his fair share of headers against the Macc defence but he couldn't quite work himself into the goal-scoring positions. The same could be said about the league's top-scorer Kristian Dennis as he also struggled to continue his prolific goalscoring form. Both sides made changes and as the game drew to a close the game livened us slightly. A corner here, a shot there, with a couple of free-kicks thrown in, however, weren't enough to give either side a last-minute winner and as Mr. Barratt blew for full-time the ground made a mass-groan of derby-day disappointment and headed for the exit. The news that Halifax had won meant that the Robins would fall into the relegation zone despite gaining a point. With 5 draws in the last 6 games and only 1 win in 10, it will almost certainly prove to be a tough final 12 games for the home side. Full-time, Robins 0-0 Macc.

We briskly left the wooden stand and the equally wooden performance behind us to return to the bar, where we at least managed to get a picture with Kristian Dennis to remember an otherwise unexciting afternoon by. At this point Will became 'that guy', as his parting words to Dennis were "make sure you get top goalscorer". Between a mouth-full of his curry and chips, he simply replied with "I'll try". With that, we supped up and shipped out of Altrincham after a fairly anti-climactic away day where the Silkmen couldn't quite break their poor run against a struggling Robins side. A draw was fair, albeit a result that neither side wanted.