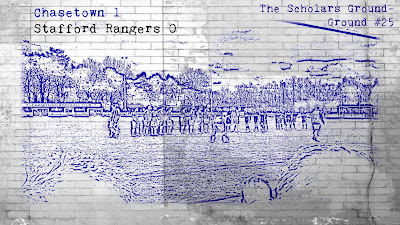 Monday 28th March 2016, the morning after Storm Katie had hit Great Britain and left some of the Football League and non-league grounds out of bounds for the traditional Easter Monday fixtures. Locally, Leek Town's game against Newcastle Town was postponed and across the region some of the bigger grounds, like Hednesford Town's Keys Park, were also waterlogged. In an attempt to get to a game, I took to Twitter in the morning to see if anybody was still up for it. In the end, I found myself following updates from Chasetown's page to see that a potential crunch-tie between two Staffordshire rivals as the Chase tried their damnedest to pull together a pitch suitable to host the Evo-Stik First Divison South leaders, Stafford Rangers.


After almost an hour sat in the legendary Bank Holiday M6 Traffic, I pulled off the motorway still in decent time for arrival at a ground in which I had no idea where it actually was. I knew it was in Staffordshire, I knew it was fairly local to Stafford, but I did not know which town it was located in or even if Chasetown was a place. Anyway, as time ticked away I made it to a long narrow street which had ultimately become one-way due to cars parked up for the game. My first indication that I had made it was when a steward popped out from the cars and said to me as I drove past, "it's full." Assuming he meant the car park, I had no option but to carry on until I came across a lucky space between two poorly parked cars which allowed me to park right outside the Scholars Ground. As if by magic, I was here.


I was happy to be confronted with a queue upon my arrival at the turnstile, mainly because it meant that people had actually bothered to make the journey to what could probably be considered a derby match. Stafford Rangers started the day 10 points clear of their closest rivals, Shaw Lane Aquaforce, who had three games in hand on Boro. The home side, meanwhile, were chasing a play-off spot and were only three points off Lincoln United who occupied the 5th place space in the Evo-Stik. With 17 points out of 24 in their last 8 games, the Chase were going well and with a solid 3-0 victory over Market Drayton in their last outing, they would be hoping to give the leaders a few problems and avenge a narrow 2-1 defeat that they suffered against them on Boxing Day.

Whilst watching the last few minutes of warm-ups I decided to do my usual scout around the ground and see what was going down at Chasetown. With an average attendance of 187, The Scholars Ground was looking very busy today and in certain parts of the ground there was barely room to manoeuvre. Rangers fans had made the short travel to the game and brought with them hopes of another big win. The Chase would not be a likely side to lay down and take defeat without a fight though, as a side known for much bigger giant-killings than the one that could potentially come forth to them today. In the 2007/08 FA Cup, Chasetown made history as the lowest ranked side ever to reach the Third Round Proper, a feat which included the club's greatest achievement- a 1-0 win against Staffordshire's mighty Port Vale, coming from a replay after a 1-1 draw at Vale Park. The side eventually bowed out to Championship side Cardiff City, despite a 1-0 half-time lead, with a 3-1 home defeat which had memorial photos plastered around the clubhouse.
Continuing my walk around I was impressed by the state of the stands, which were largely seated, and also with the state of the pitch. Considering just up the road Hednesford Town were unable to play their game because of the weather, enough praise cannot be given to all involved with the club for getting the game up and running. As the sun came out to play, so did the players and the officials, which meant it was 3pm and time to get cracking. A couple of minutes of the game had passed before everybody was seated, which meant the away support could begin the afternoon of chants to come. "Staffordshire is wonderful" was sang loud and proud by the Staffordians as they sat over by the home side's goalie. The ground certainly wasn't consistent in style, with one side roofed by a white gazebo-type material over the green seating, another built up with wood and old blue chairs, and then over by the other goal was a metal-sheeted stand.


The shouting continued to come from this side and even 10 minutes into the match there was still fans arriving. One senior fan expressed that he had tried to sneak over the turnstile, but couldn't get his leg over. Whilst another, stood behind me, kept asking his mate how Walsall were doing. I was lucky enough to get a good seat by the half-way line and had a decent view of the game on display. Both sides looked decent whilst defending, not something which had always been the case at this level, and seemed happy to play the ball in a tactical and structured manner. Kevin Hemagou had endless running in him throughout the opening section of the match and looked capable of taking on the Stafford defence if given half a chance.


Going forward appeared to be where the strength lied for the Chase, and as they pressed forward the only answer for the away side was to take a chunk out of the midfielder's legs. A chap and his wife had already started to vocalise their opinion on the way Rangers were playing, and he expressed fairly early on that the game was likely to turn nasty. As the fouls did start to come thick and fast, he then turned to his wife and told her the oppositions tactics "they take it in turns to foul, this lot. They do it to avoid the bookings." I'm sure that were this a suitable method of play, that most teams would be trying it out! Just after the 15 minute mark the first real chance fell to the home side. The ball bobbled and bounced around, was flicked up, flapped out and bumbled back in again, before the ball eventually fell kindly on the volley for Paul Sullivan and was powered high over the bar. This was a signal of intent for the Chase though, who were largely on top of the supposed top side in the league. Ahmed Obeng looked to be the Rangers best hope, as he paced up and down the flanks and looked to latch on to clearances and start a counter. The ball never really stayed up there long enough for them though in the first-half and Chasetown continued to seek out the first goal. After a free-kick was give on the side of the box, there was an interesting exchange between the two teams as the away side appeared to refuse to construct their wall at a suitable distance away from the ball. After being warned twice by the ref, ex-Rangers player James Dance had a word with his former team mates and the message was eventually received. In the end the free-kick was headed out for a corner and nothing came of it, but it did leave the crowd wondering why the wall were continuously disobeying the officials.


As the first-half drew to a close the phones began to appear in the hands of some fans, obviously to check how the teams around the grounds were doing. I overheard murmurs of fans talking about Walsall, the Baggies and Hednesford, whilst one Rangers fan made comment on the fact that Shaw Lane had taken a lead in their fixture and at this point reduced the leaders advantage to 8 points. Surely enough the ref blew and the fans piled into the clubhouse to grab a much needed pint. The game was decent enough and showed the feisty nature of any good derby, but with a win needed for both side, there was still an element of frustration amongst the fans that nobody had taken the game by the scruff of the neck to get the opener.


The two sets of fans swapped sides just like the players, and the second-half was under way. It was clear to see that the Stafford team-talk had kicked the side into action, as they began to show some sign of why they were the top dogs. For at least the first 15 minutes of the second-half it was all Stafford and had it not been for the tank at the back for Chasetown, Henry Eze, it seemed likely that the goal was just around the corner. "We're gonna score in a minute, score in a minute" was a constant chant given out by the away fans as corner followed corner and free kick followed free kick. James Dance, Chasetown's Gareth Bale lookalike, was starting to feel the wrath of his former employers and he was often reprimanded by the referee for persistent fouls.


A change had to be made by Chasetown and in the end they sacrificed Hemagou to change the attacking line-up. This choice was not met with a good reception from the Chase's right-back, Mike Williams, who shouted out "don't fuckin' take him off!" This didn't seem to do much for the home side though, as Rangers continued to press. On 75 minutes an acrobatic volley was sent wide by Boro and a host of other chances were blocked. An irate fan looked at me and said "did you see that? 52 chances, all blocked!" With not long left, it was seeming that the Chase would settle for a point- so much so, that the Keeper picked up a yellow card for time-wasting. On the counter, a chance did come for the home side and it was only a block from a team-mate lying down in the box which prevented a shot on target. Williams began to get forward well in the latter stages and had a mazy run which resulted in a booking for a dive, which was dubious, but then as the clock hit 85 minutes he made the decisive cross to settle the game. A good counter attack and ball into the danger area was met by a bloke off the bench, Stan Mugisha, who smashed it home with confidence. Chase 1-0 Rangers. A cruel blow for the away side and absolute jubilation for Chasetown Football Club. With 5 minute to go the wind was truly taken from the Rangers sails, who failed to show the grit and determination I'd previously seen them show against Rugby Town back in October, and in injury time it was almost 2-0. Mugisha forced a stunning save from Adam Whitehouse and despite four minutes of added time, there was nothing else to follow on the goals front. Full time and a great victory for the Chase.

I quickly headed back to my car, knowing the madness which would follow if I didn't get out quickly, and set off home. A good game which based on the first-half and the last 10 minutes of the second-half was probably a fair one. I'm sure that Rangers will argue that they didn't deserve to lose, but the sad truth for them was that they weren't as clinical as they had been throughout the season and that cost them on a tough away trip.