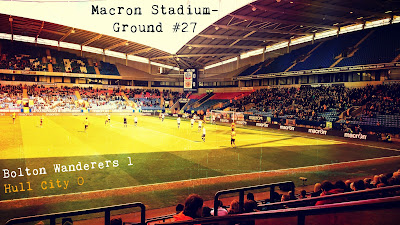 Match one of two for Pint of Football Reviews today, and a first ever trip to the Macron Stadium (which I still refer to as the Reebok, for old time sake). Being a game picked to be shown live on Sky Sports, this 12:30pm kick-off allowed me to take my Ground-hopping adventures to a new high, with the potential of attending back-to-back games in the same day. Being a Macc Town fan, I want to start by bringing back some happier memories I have of the two sides in action today. The first time I saw Bolton in action was when they were fighting for Premier League survival back in 2012, and they visited Moss Rose for an FA Cup ding-dong of a clash which eventually ended 2-2. A great result for the Silkmen and also the occasion of the best live goal I've ever seen. Arnaud Mendy's volley is worth a watch if you've not seen it before. The 2011/12 Season also saw Macc come across Hull City and this Capital One Cup First Round Fixture resulted in a famous 2-0 victory for the Silkmen at the KC. Not bad!


Arriving at the ground at exactly 12:30, I didn't really have the time I'd wanted to scout around the stadium that I'd been eager to visit for a while, and so I headed straight to the car park and then made a mild jog towards the entrance. As this wasn't my usual non-league cup of tea, I had to actually spend time finding out which entrance to enter by and then even more time finding my seat.
The visitors today were The Tigers, who were sitting pretty in 4th place in the Championship, and they arrived knowing that they were already guaranteed a spot in the Playoffs. With an almost certainty that they would be facing Derby County in the two-legged fight for a spot at Wembley, the final two games for Hull would be hopefully about building momentum and not picking up any injuries or suspensions. For Wanderers, however, this would be their last game as a Championship club for the time being, as they had already been relegated at the beginning of the month. For them, it would be nice just to pick up a bit of confidence and attempt to end a run of 14 matches without a win. With financial calamity hitting Bolton since they fell out of the Premier League, Bolton have been on a terrible downwards spiral which will see them follow in the footsteps of Sheffield United, Wigan Athletic, Blackpool and many others in falling much further than expected. My pre-match prediction was for a 2-1 Hull victory.

The thing that I love about the larger grounds in the country, baring in mind I'm used to watching teams from the Evo-Stik divisions, is the first sight you get when you walk through the tunnel and walk into a stadium which contains history, memories and 22 players ready to fight for victory, and the Macron (Reebok!) was no different. The away crowd were singing loud and proud, the cameras were out to capture the live footage and the managers were yet to sit down and watch the match unfold, it was a good first image to enter into the game. I took my seat after standing and absorbing the view for a minute, and no sooner had I done so did we get the first moment of many to come from the big man upfront, Emile Heskey. A throw-in was launched up to the big target man who rumbled past his defender and tried to knock the ball into space down the line. Unfortunately for the former England star he fell over and was met by a hail of laughter and sarcastic comments- and that was just from his own fans!

It is worth pointing out that I am a big fan of Emile Heskey, having followed his England career and seen him play (and score!) many a time for Liverpool in Europe, back in the days when European football was on poor-folk TV. Even in his prime, the 38-year old powerhouse from Leicester had never been posted as a thriving goalscorer and it seemed odd to me that a team would choose to use him as a sole striker playing so high up the pitch and with little support, but I suppose that may be because of a lack of other options for Bolton at the moment. In fairness, from the start of the game he posed a threat to the Hull City defenders and at times they couldn't handle his hold-up play, but with Zach Clough and Darren Pratley often being late to the party to aid his play, it was often a cause of much frustration amongst fans. One fan had already turned to his son during the early proceedings and said "I wash my hands". However, from my point of view it seemed to be that Hull hadn't had the best of starts either, with only Akpom coming close with a header, and it could well be one for the taking if they could rally round and play for the fans. On the 20 minute mark, Bolton had a great chance and were very unlucky not to score. First, a shot from Pratley was well saved by Jakupovic, to which the rebound fell to Clough who's shot was blocked and then it finally came to Neil Danns outside of the box- he lined up a shot and just dragged it wide. Hull were looking slightly frustrated at the way they'd struggled to grasp the game in the opening half and as the clock kept ticking, the game began to get physical. After Robert Snodgrass had a tussle with with Bolton's Wilson and Darren Pratley was ridiculed for a tumble in the opposition's penalty area, there was a crunch tackle on Heskey which led to the ball being kicked out- and a chance for everybody to take a minute to calm down a bit.

Having already seen Bolton take on Port Vale in pre-season back in July, I had been impressed by Osede Prieto (aka Derik) and I was looking forward to seeing how he had developed. When I watched him play at centre-back he looked confident, strong and he was also capable of picking a pass. At the time, I had thought after him as a young Iván Campo- and not just because he was also a former Real Madrid player with a funky hair-do. However, today he was playing as a holding midfielder and he quite simply looked lost in the midst of the action. When Bolton won a throw-in, they often ended up throwing it to him when you could tell that he didn't want it, and his passing wasn't what I'd remembered- perhaps the Galácticos effect had worn off? As half-time approached, Hull City won a free-kick in a promising place and Snodgrass swung his left-footed drive over the wall and it hit the top of the crossbar and bounced out for a goal kick. Unlucky, 0-0 at the break.
With 15 minutes to grab some food, I quickly headed to see what was available. When in a long queue, I tend to change my mind so many times that I never know what to get- I mean, footy match food is all so so good! Having started at the back of the queue as a "Pie and Pint" guy, I eventually changed my mind to getting the cheaper Burger and Soft Drink Meal Deal, but then when the lady said "next please" I made a last minute change again and asked for a tea and a Meat and Potato Pie. She told me there was only Peppered Steak left, which therefore rendered my last 5 minutes of internal debate as mute. I grabbed my pie, which was actually delicious, and headed back to my seat where I watched a half-time penalty shoot-out between two local kiddies teams. When a Youngster slotted home the winning penalty against Bolton's mascot, I was treated to the loudest cheer I'd heard so far this afternoon.

Another excitement came for the home fans at the end of half-time, when the result of the "Golden Gamble" came. This was a random lottery-style draw in which one row of seats within the ground would win free pies- only in the North! After the climax of fun, the teams jogged back out and got into position for 45 minutes which would hopefully at least bring a couple more chances. The first ten minutes were as tense and slow-paced as the majority of the first half, but there was one great chance for Danns and had he hit his shot closer to either post it would've gone in. Fortunately for the away keeper, it was within his reach and he pulled out a good save. This piece of play was encouraging for the home fans, who were seeing their side tear apart a top Championship club at times. The only issue was that for each time they pressed, Hull looked a danger on the counter and Bolton often relied on the solid defensive efforts of Wheater to prevent Akpom the chance to run into the Wanderers box.

A moment of comedy fell upon the ground next, one which I'm sure had the viewers watching at home laughing too. A large pink balloon blew on to the pitch before a Bolton goal-kick and the referee halted play to spend the next few moments half-heartedly following the balloon around, which resulted in a universal build-up of cheers until the moment where he penultimately caught and popped the balloon- "Whaaaaaaaay". Shortly after this, we were treated to some football-related action as Akpom blasted a rifling effort on to the underside of the bar- a chance that you felt at the time could have made the difference. It certainly was one that they would rue, as Bolton's break was just around the corner. Bolton subbed off Heskey, to which around a dozen people gave him a standing ovation, and he was replaced by youngster George Newell. The lad came on and looked lively, popping the ball about and looking lively with runs at the Hull defence. Wasting no time in taking advantage of the chance in tempo, Lawrie Wilson centred a ball through the crowded box and another substitute, Stephen Dobbie, slid home from a few yards out. Bolton 1-0 Hull. The Tigers made attempts to get back into the game from this killer blow, bringing on the big guns from the bench. Aluko and Diamé replaced Akpom and Maloney and with this Bolton shut up shop to sit back and digest 20 minutes of pressure from the visitors. With one eye on the clock, and a second match to get to, I edged closer towards the exit and was just in view of the Bolton goal by the time the extra time was indicated- which was all that I really needed to see. Hull couldn't take their chances though and Bolton ended their winless run to secure a pride-restoring 3-points.

I quickly ran back to my car and set up my sat nav to take me to Moor Lane, which stated I would arrive at 2:55pm. I knew I'd be cutting it fine, and having already read on Twitter that the Salford game would probably sell out, I wasn't even guaranteed to get in once I arrived. Being the ground-hopping adventurer I am though, I took off to go and see some more of the game that I love.
Posted by Daz Knapton at 14:04