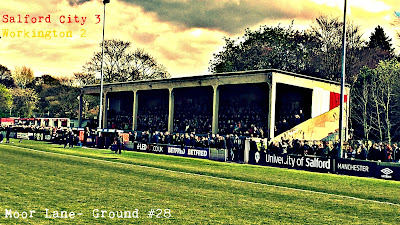 Match two of two for Pint of Football Reviews today, and this time it is the main event and a thrilling game at Moor Lane, the home of Salford City. Possibly the most recently-famous club in the non-league, The Ammies are known for being the club taken over by Nicky Butt, Paul Scholes, Ryan Giggs and the Neville brothers (who now own 50% of the club). This reign has so far brought success both on and off the pitch for the club, who were promoted last season and looked for a second successive season in which they could climb the non-league ladder. With a prize of a spot in the National League North next season at Stake, Workington were the eager visitors this afternoon and the club which Grant Holt started with were looking to upset the Class of 92' by taking the spoils in what proved to be a classic. My prediction would be for Salford to win by a close margin- and little did I know how close of a margin it would actually be! Having left the Macron Stadium at 2:25pm from my first game of the day, I bombed down the M61 to arrive at Moor Lane with just a couple of minutes to spare. Having seen pre-match Tweets from the club stating to get there early, I feared I wouldn't get in. Luckily, I did get into the ground and I was astounded at the amount of fans at the game- there must've been a couple of thousand there.


I shuffled my way through the Salford faithful and got around to the outdoor bar to join the queue, a move which seemed to bring me into disrepute from the home fans. As I crossed the main stand in the ground, donning a yellow scarf (which I purchased at my trip to Sporting Khalsa), a selection of fans started to shout out "You've only come to see the Salford!"- I was unsure of this chant was aimed directly at me, so I just put my head down and carried on moving! Whilst in the queue, I just about saw between a couple of heads that the home side had fallen behind within 4 minutes. Not the start they wanted- Kyle May had silenced the fans momentarily, and caused people to remember that this game wasn't going to be a walk in the park today. Salford 0-1 Workington.


Despite finishing in the final Playoff space in the League, Workington stunned runners up Blyth Spartans on Tuesday night to set up this tie and they were clearly intent on doing the same again here today. Whilst the game took a few minutes to settle down I took a minute to pop into the Club Shop and bought myself another scarf to add to my collection, which now includes Khalsa, Harrogate Railway and Salford City. When I came out I found myself a decent spot to stand with my pint and I was just in time for the first equaliser of the day. Only 15 minutes had passed by and and it was left-back O'Halloran who headed home to the delight of the majority. Salford 1-1 Workington. The game was already proving to be entertaining and goal-filled, just like Workington's Tuesday night thriller which ended 4-3 thanks to an Allison hat-trick.

Now that they were back on level terms, Salford didn't really take the initiative and ended up sitting on the back foot again, which in all fairness was due to some cutting passes from the away side. Eventually, the pressure took its toll and when the ball came out to the left-hand side of the goal, a cross-shot sizzled across the 6-yard box and it was Arnison who restored the lead with just 20 minutes played. Salford 1-2 Workington. All of a sudden the importance of the fixture seemed to dawn on some fans, as the pre-match jokes and laughed faded and all vocal efforts were focussed on cheering on The Ammies. The first-half settled down a bit after the early flutter of goals, and a bit of solidarity from the defences meant that there were to be no more goals in this 45. Not that there wasn't the odd half-chance though, one looping header from a tight angle almost landed in the Workington net, and some cracking skill from a travelling midfielder was met by a crunching tackle, ending with a 17-player gathering which had it not been for the scale of the game could've concluded with something more than just a modest parting and a booking. Salford continued to pressure, but the whistle soon came around for half-time it was the home side who had the work to do in the second-half.

It's not every day that you attend a non-league fixture with sporting legends, so I decided to use the break to go over and see if Gary Neville and Paul Scholes would be willing to get a picture with me to have as a further souvenir for my Blogging ventures. A queue had already formed with youngsters and adults alike getting Manchester United merch signed, having selfies and even just showing their appreciation for the Ex-England players and Champion's League winners. They were both very nice chaps, and had they not had so much attention I would've loved to talk to them for more than a couple of seconds and quiz them about their future plans for the club.

With the crowds coming thick and fast to meet the co-owners, I absconded back to the standing area and prepared for the sides to rejoin the field. Surely enough, the Salford lads came out with all guns blazing and they looked like they really wanted to make the comeback. The belief was there, the pressure was constant and the fans were really getting behind them- the perfect concoction for when you are up against it.

As the game got more edgy and time started to run down, the fans were flooding to the bar to buy preparation celebratory/commiseration drinks and one fan shouted out in the most broad of Mancunian accents, "Fuck off, soft arse number 6! Fat twat, you are fucking shiiiiite!"- probably the most hilarious and well put piece of fan abuse I'd heard this season.

Joking aside, Salford were playing some great football and it looked like the equaliser must be on its way. Danny Webber, who joined Salford from League Two Accrington Stanley, was replaced by Gareth Seddon- a man who was playing upfront with Jamie Vardy for Fleetwood just 5 years ago. In my attempt to be ready for the post-show trophy presentation, I left pitch-side for the bar and I'm sure you can guess what happened next. Just as I was handing over the money for my drink, the roar from outside told me that Salford had equalised again! I went out as quickly as possible and heard that it was a goal from the midfield, not that anyone cared who it was- the fact was that it was game on with 10 minutes to go. Salford 2-2 Workington. City had took Ashton United to extra time and won 3-1 in the Semi-final, and it seemed as though we'd be in for another instalment of extra time. Salford wanted to end it sooner though, and pressed for the late winner. Chances came and went, Workington had a couple of counter-attacks too and everybody was on their feet for the nervy ending. And then, the moment of magic, the moment of the season and the moment of Salford City's history happened. The ball came in from a throw-in on the right, it was flapped by the keeper into the path of an attacker who headed it on to the post, before coming to Jordan Hulme who stretched out a volley from point-blank range, which the keeper kept out somehow, but only to palm it back to Hulme who this time sealed his place in the record books. An absolutely magic moment for Salford in the 89th minute, and a soul-crushing one for a Workington side who had looked capable of stealing themselves just a minute before. Salford 3-2 Workington.

With all the excitement, I forget what else happened for the remaining 4 minutes of added time- but none of that is important really because Salford kept going until the final whistle and when the referee blew for full-time, the almighty Salford roar bellowed through Moor Lane and fans overcome with excitement flooded on to the pitch to celebrate a second successive promotion.

In a career full of highlights, the Class of 92' I'm sure will be thrilled now to have given this club the foundation to achieve their own highlights. A club which were sitting in the midst of the Evo-Stik are now going to be a National League North team next year, which means that they will be on Football Manager! How exciting for them.