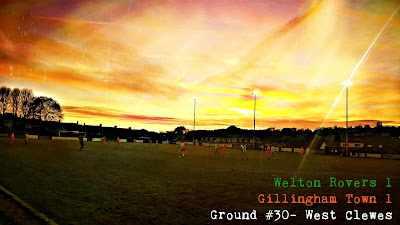 Day Two of my almighty tour of the Western League had tonight brought me and 'Partizan Bristle', who has also churned out a tasty review of the ground, to the sleepy Somerset town of Midsomer Norton for what would be Welton Rovers's last home game as a Western League Premier League team, since having relegation confirmed at the weekend against League Champions Odd Down. Today's opponents were mid-table Dorset-based side, Gillingham Town (who are not to be confused with the League One side from Kent!) and they arrived at West Clewes knowing that the current 9th place they occupied could be the best they could achieve this year.


Again travelling from the Bristolian village of Shirehampton again, we took a scenic drive through the city and out the back end towards Midsomer Norton- passing tomorrow's intended ground, Hengrove Athletic, on the way. A decent drive allowed us to arrive at the West Clewes ground with 5 minutes or so to spare- and in the same fashion as yesterday's match at Cribbs, we were greeted by a couple of locals who took our money upon driven entry into the ground's car-park, and even decided to give Tom a bit of a dig for his lack of meaningful coinage, referring to his money as "Pig Iron", which I can only assume is a Western-folk thing. It was then just a few meters to drive and park up right behind the goal, which we decided could be handy if there was a sudden downpour of rain.
We stood and took in the surroundings for a minute or so, and did our usual ground-hopping picture-taking thing. As with yesterday, the pitch seemed in a good state, the clubhouse was nice and there was a few folk out and about for the game. I stood by the goal for a few minutes and listened to a fairly expansive pre-match monologue from the announcer for the evening. Ranging from a shout-out for the Ball Boy of 35 years, to a cheeky advert for the lady who did the food, the guy was really enjoying his final speech of the season. After further crediting the fans and the players, he signed off with a loud chant of "Greeeeeen Arrrrrmy!", which was met by a few fans shouting it back. Upon arrival there would only seem to be about 20-30 fans there, but a few minutes into the game this crowd seemed to double as people headed out from the clubhouse. Being an already relegated side taking on a team who couldn't be budged from the mid-table, the game was not expected to be a classic and I had made a pre-match prediction of Gillingham to eventually run away to a 3 or 4 goal victory.

With a team featuring a Theo Bailey-Jones (Macclesfield Town) lookalike up top and a big centre-back wearing a Petr Cech style helmet, Welton Rovers certainly didn't start the game looking like a relegated team, but then again it could just have been the case that the Gills had already finished with the season mentally. Either way, Rovers started playing some impressive stuff and often got the ball up to the pacey striker who, in my opinion, seemed to have a playing-style of a converted winger rather than a leading striker. A classic example of this was when he managed to burst in between the centre-backs and bare down on the opposition goal, before over-hitting the ball past the keeper and out of play. A few loyal fans shouted out the "Green Army" chant again and the atmosphere was fairly optimistic amongst the fans, who I'm sure would be hoping that a return to the Western First Division would be only for one season.

I overheard a couple of away fans at the ground too who were speaking fairly highly of the clubhouse, stating that it had apparently been extended twice- very fancy. It was true though that the ground was a good reflection of the club, and it is also due to host the final of the Les Phillips Cup Final this season. On the pitch, as expected, there weren't really any fireworks and the feel of an end of season display had shaped up. However, on 20 minutes the home-side started to build some good momentum, and a great run from Chris Peck eventually led to a lay-off for Lewis Dunn to tuck away his 8th goal of the season. It has to be said that Peck was helped out by the Gills defence, who seemed to fall asleep for a few moments during the attack, but nevertheless he still did well to pick out the right pass and serve up an assist for Dunn. Rovers 1-0 Gills.

Following a celebratory beep of a car horn over in the car park, the Gills got the game rolling again. The remains of the first-half were filled out with a few half-chances from the home side and on the odd occasion Gillingham looked likely themselves and had it not been for the solid central defender, Joe Garland, at the heart of the Green Army's defence it could well have been all-square at the break. The referee blew and that was it for the first-half, which meant it was time to go and see what else was going on around the ground.

During the break Tom came across a fellow ground-hopper and Gashead, whom he had met in the past at a bunch of games. Whilst chatting to him and quizzing him about local grounds, I also found the time to grab myself a scarf to add to my slowly-expanding collection. I can boast to own scarves from Sporting Khalsa, Harrogate Railway, Salford City and now the mighty Welton Rovers. As always, half-time quickly came and went and I promptly transferred my pint from a glass into a plastic, ready for the second-half.

As the sun bid us farewell and the game resumed, we took a stand by the Welton Rovers live commentary team and decided to listen in to the insightful views of Ian Nockolds. I sense that he may have been speaking as a frustrated fan who had seen Rovers many a time, but I found myself disagreeing with his often negative views on the side who had so far played pretty well. Although I had only seen one game, and following the second-half I could certainly see some of the cracks of a potentially good side. One being the tendency to sit back on a 1-0 lead, which Nockolds had commented on as they allowed the Gills to invite themselves closer towards an equaliser. Yet surprisingly it was almost Welton who grabbed the second goal just before the hour, as a well worked move was skied over the bar and into the park's trees in the background.

It did seem that a second goal was coming, with the odd counter from Welton often being wasted and the away side pressing to clinch a point. A couple of ballooned efforts from Rovers could well have been screamers on another day and it seemed that Garland was only just about holding the home side's defence together. As the pressure told for Rovers, the nerves started to kick in amongst the players, the fans and even the Ball Boy. Following 36 years with the club, my admiration could not have been higher for the chap, but when the first action for the legendary figure during the game was to return the ball back to the keeper, he certainly let complacency get the better of him. As the ball bobbled kindly towards him, he reached out to complete his routine and a cruel act of god instead meant that he suffered a humiliating tumble to the ground. After seconds passed-by of him lying down and out, the medical team quickly rushed over to aid him and the commentary team quickly turned their attention to the unfortunate incident. It was one of those moments that you couldn't help but laugh at (because it was hilarious!), but as the fans started show concern it was also a sign of the respect that the lad obviously has at the club.

With attacking intent and skilful play, the away side just seemed to lack a bit of luck to grab an equaliser- and of course when you are at the bottom of the table, luck is something that you often find yourself gifting to the opposition. This was the case tonight as a straight-forward free-kick was directly struck into the body of the Sam Lewis in the Welton goal, who fumbled it and dropped it to the ground as it eventually crawled over the line and seemingly summarised Rovers season in one moment. Rovers 1-1 Gills. With not much left in the tank from either side at this point, any further chances which fell to either side were created because of fatigue, and also not taken because of fatigue. The Welton left-back in particular struggled in the last half an hour and the game came to a flat end.
A share of the spoils was fair and as previously mentioned seemed more and more likely as the game went on. The games at this stage of the season are usually just formality for teams in a situation of no possible change in league stance, but it was still a decent game and I was left yet again impressed by the well-run club I'd had the chance to visit. The Western League has so far provided two decent grounds and with a third still to come tomorrow at Hengrove Athletic, I was so far satisfied by what I'd seen.
Posted by Daz Knapton at 17:43