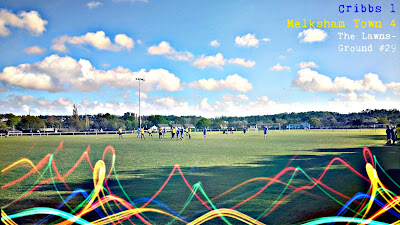 On the day when Leicester City won the Premier League, people will remember how Eden Hazard struck home an equaliser for Chelsea to start the Vardy party. I, however, was in Bristol with 'Partizan Bristle' (aka Tom) for a few days of non-league madness featuring some of the Western League's finest and enjoying some proper football. And by proper football, I mean the Les Phillips Cup Quarter-Final. Tom has also done a review on this game, which is worth a skeg.

Waking up in Stoke, I had not expected to end up at Cribbs today. Me and Tom had originally anticipated travelling to Devon to watch Buckland Athletic as they fought against Bristol Manor Farm in the same competition, but after a terrible drive down via Wales, that was never going to happen. Instead, we quickly jumped on Google Maps to look for other local games nearer to Tom's Shirehampton abode. In a hasty scroll through his phone, Tom had found a match for us at Portishead's Bristol Road ground. We drove through the Bank Holiday traffic and made it in very good time, only to be greeted with an empty ground with nobody in sight. Upon further inspection we realised that it was a reserve game for Portishead and would have to again look elsewhere- the footballing gods didn't seem to be with us on this rainy afternoon! As indicated in the title of the post, we ended up driving through the busy shopping establishment of Cribbs Causeway to eventually find the hidden gem of Cribbs FC.

Nicknamed "Cribbs" (Unsurprisingly!), Cribbs FC are a team with an odd history which doesn't actually begin in Causeway. Founded in London in 1958 as a team called "Sun Life Assurance", the team only actually moved to Bristol in 1976 when the firm relocated and took the team with them and eventually became known as "Cribbs Friends Life FC". The team only became Cribbs in 2013 after losing sponsorship backing and that is how they have continued to be until today. Melksham Town, however, haven't had such a variety of odd names after firms they were affiliated with and were the favourites for this afternoon's match having managed to sit pretty in the 5th spot of the Toolstation Western Premier League table, which they also won last season too.

We arrived at the match with 20 minutes to spare and (in a similar fashion to my outing to Brocton) we were greeted upon the entrance by a couple of happy chaps who were selling tickets to fans as they arrived by car- due to the notable disadvantage of no turnstile. The man took our money, handed over a free programme to us both and then we parked up ready to see what action the Les Phillips Cup would have in store. Initially, the hopes weren't high as we navigated our way around the building labelled as "clubhouse" and failed to find a door that we could open. Upon reaching the front of the building, pictured above, we were highly relieved and headed in for a pre-match pint. It must be said that the clubhouse was top notch for this level and is up there with the likes of Harrogate Railway's facilities and the nice bar areas at Stafford Rangers. After a friendly chat with barman Roy, maker of the legendary value for money "Roy's Rolls" (2 for £1!), we headed to a seat in the far corner of the clubhouse and predicted what we expected from the game. Having no idea about either team with the last minute choice to attend, I did not make my usual pre-match prediction.

With the rolls not lasting the time it took to make them, we supped up our beer and headed out to a cold and rainy pitch-side. The sides came out and exchanged a shake of hands before getting the game under way promptly- they weren't messing about, it was cold! We took shelter under the seated stand which was seemingly for the away support and within the first couple of minutes the first goal came. Tom had pre-told me about the high-scoring affairs in the Western League and after just a couple of minutes the Melksham keeper dashed out like a young Manuel Neuer and ended up gifting Cribbs an early opener. Cribbs 1-0 Melksham. At this point I hadn't properly clarified which team was which, and due to the lack of cheering I was still none the wiser. With further examination I noticed the home fans located in a different stand, which was oddly located further away from the pitch than the other stand.

Following the opening goal, Cribbs continued to play well and looked decent in possession of the ball, that was until a big early turning point in the game. Just before the 15-minute mark, a player from either side hit the deck and the following scuffle between the two had obviously involved a kick from George Brimson, as he was unexpectedly dismissed as he lifted himself up from the ground. With an early red card, Cribbs were up against it now and I will mention now already that other than from counting the players on the field you would not have known that they had the disadvantage. With the emotion-fuel Matt Turner between the sticks leading from the back with encouraging and slightly threatening words to his team-mates, Cribbs continued to press and almost grabbed a second before the half an hour mark. Melksham tried not to seem too rattled by the early setback though, and slowly managed to carve a chance or two of their own. The finest moment of the first-half for me came when an ultimate scramble in the box came to a Melksham attacker in the Cribbs box and he lashed a strike towards goal. Turner was equal to the challenge though and palmed away the first of many top class saves which crucially meant that Cribbs held a 1-0 lead at half-time against a team who on paper were superior having come into the game as favourites and now also had an extra man advantage.

I got chatting to a couple of the fans and the barman at the break and Tom grabbed a couple of those bargain butties that he'd been eyeing up when I had mine earlier on. We sat back down in the corner and discussed what a nice club we had stumbled across. Not only was the clubhouse modern and busy with home and away fans, but the pitch was also in very good nick and considering how many Western League fixtures are called off from the weather I'd have to say that I was impressed with the afternoon so far. Despite only seeing one goal, I was still interested to see if Cribbs could hold on in the second half or whether Melksham would make them pay for the early dismissal.
The start of the half saw a spell of pressure from the away side and had it not been for the legendary Western League wind a few of the crosses from the wings may have made a bit of an impact. Melksham changed to an on the ground approach and played in some decent balls across the deck, which in the end put defender Josh Jones under too much pressure and he could do nothing but concede a penalty. Being deemed a tackle worthy of a straight red, Jones walked off looking pretty gutted and the home fans shouted their disgust. Shouts of "that's corrupt" were heard in the background as the penalty was slotted home, meaning that with 9-men left on the field the rest of the game would be tough to play out. Cribbs 1-1 Melksham.


With over half an hour to play, Cribbs best shot was to try and hold out until the end of 90 minutes, struggle through 30 more minutes of extra time and then take the game via penalty shoot-out- although having played a game on Saturday, I'm sure neither team would have been relishing such a lengthy affair. Needless to say that Melksham pressed and pushed for the winner in regular time, but another great save from the Western League's answer to Rustu Recber, this time with his shoulder from point-blank range, ensured that the underdogs weren't out of it. And in fact the spirit and determination spread throughout the team, and as the end of the 90 approached Cribbs actually came close to a goal on more than one occasion. At times, the Cribbs 9 played the ball around the park very well and managed to stretch the Melksham side who were left chasing the ball. Alas, neither side could snatch the winner and the referee called time on the proceedings, for the time being.

We dashed in for an extra-time beverage and then reconvened at pitch side to see how the remains of the game would pan out. After watching Bristol Rovers and Grimsby play until penalties at Wembley last year, Tom was slightly more relaxed in this instance as he could enjoy the game as a neutral, rather than a Gashead. During the first 15, Melksham came close a couple of times but it seemed at this point that with Matt Turner's fine display that the game would remain deadlocked. He made another decent save and palmed away a couple of corners to add to his impressive collection on the day. At one point when Turner went down with a slight foot injury, we feared the worst- but he was soon up and at em again. The ref blew for the end of the first part of Extra Time and the quick turnaround allowed us to get under away for the fourth and final time.


A place in the semi-final was up for grabs and the Les Phillips Cup was one that both sides want to stay in touch with, primarily because there is a cash reward for the winners of each game. When you are a non-league side, the thought of prize money from any competition is enough to give you the will to win it- and in the first minute of the final 15, that is exactly what Melksham did. In a rare moment where the keeper could do no more, substitute Dan Kovacs scored from a rebound shot and the hearts of the fighting home team were broken. Cribbs 1-2 Melksham. This proved to be the somewhat unfair end for Cribbs, who instantly were on the back-foot from their own kick-off and seemed unlikely to have the ability at this stage to get back on level terms. A good run from midfield, mixed with a weary Cribbs back-line, meant that a ball could be almost freely laid back to Kovacs who quickly doubled his total for the day and put an end to the game. Cribbs 1-3 Melksham. The game was turning into one that did not reflect the play of Cribbs, but one that was simply the result of fatigue and the introduction of Melksham's super-sub Kovacs. And he wasn't finished, adding a hat-trick goal on 117 minutes to put the icing on a yellow Melksham Town cake. Cribbs 1-4 Melksham.
The Melksham Town side departed the field straight away after the relief of overcoming the heavy resistance of Cribbs. The home-side remained on the field though and had a debrief on the halfway line, having gave it their all and in the end only fell short to Mr. Kovacs. We promptly departed the ground with a feeling of gleeful surprise at having found ourselves a really nice club with an eventful match to boot. Having got back to Shirehampton and seen that Buckland vs Manor Farm had been a lonesome 1-0, we were glad of our decision (albeit a forced one!) to attend The Lawns instead. Thanks again for the rolls, Roy!
Posted by Daz Knapton at 03:41