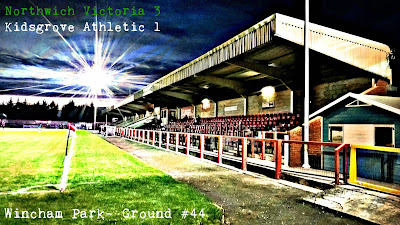 With just a month to go until the big Pint of Football Groundhopping tour to Ireland, NI and Wales, it was time to take in one last match on home soil and with that came about a midweek trip to Northwich and another trip up the dreaded rush-hour M6 in search of some more Evo-Stik goodness. Having already visited, and loved, the Novus Stadium roughly one year ago I had since been following the progress of the Grove and was thrilled to be getting another chance to see the Blues, who were taking on one of my Football Manager conquests of yesteryear. I managed to take the Vics to League Two and became somewhat of a club icon.


At this early stage of the campaign, it is a bit harsh to call tonight's game a "basement battle" at the bottom end of the Evo-Stik South, but the sad truth was that neither side had began the campaign in the finest of form. Both sides were already out of the FA Cup and they have so far managed just 11 points between them to this point, despite neither looking particularly shy in the attack department. At the start of the evening, Kidsgrove sat joint bottom of the league and Northwich's first League win on Saturday had still only seen them climb up to 16th- having played as many as 3 games more than some sides just below them. With a hope to see some better defending than my last two outings, I parked up nice and early at Witton Albion's home ground with plenty of time for a pre-match beer.


The positive thing to point out instantly about Wincham Park was that it had a nicely sized Clubhouse adjacent to the ground and even more than that, it was serving up some fairly cheap larger! Good start. Additionally, it was nice to look around and see a mixture of Witton, Northwich and Kiddy fans all sharing a brew beforehand in what was a fairly local match for the away fans. When I visited the Novus last year, I was so impressed that I gave it my highly prestigious "Home Away From Home Award" for Friendliest Ground Visited in 2015/16 and this was another reason behind my visit here. The Grove's fans were here already and, as I'd hoped, they were having a good laugh- a few beers, a game of pool and full commentary on said game to keep everybody in good spirit before heading out to pitch-side. As I passed the group to head out into the ground, I overheard one man saying that "the Wiseman" had predicted a 2-1 win for the Grove tonight to get their season back on track- and who was I to disagree? I took the mighty Wiseman's words on-board and decided to go for a 2-1 Athletic victory as my pre-match prediction.


With the main stand sharing a similar look to my old stomping ground, Queensgate Park, I felt like I was in a good place for a good evening of football- and before I knew it, 7:45 had arrived and it was time for kick-off. Playing in the classic Green and White hoops, the Vics headed out alongside the Blues and after exchanging the usual pleasantries we were soon to be up and running. The game started with good attacking intent from Kidsgrove and they could have quite easily opened the scoring within the opening 10 minutes. After a swift break from the Grove, the ball eventually fell to an onrushing attacker who struck the ball goalwards from just 3-yards out- only to be somehow denied by a well-spread Mason Springthorpe in the home goal. The following corner was then hit by a Grove attacker and subsequently had to be cleared off the line by a perfectly poised Vics man- a great start!
With a strong opening, I felt that it seemed like it'd be one of those games where the first goal would be crucial. On 20 minutes, it came from another bursting attack. This time it was the home side on the move forward, and they did it from one killer pass in midfield. With the defence sliced open, THREE attacking players broke clear and it was an in-form Jamie Hinchcliffe who struck his 4th goal in 3 games to get the ball rolling on the goal front. Vics 1-0 Grove. It was already clear to see that both sides had set out an expressive line-up and as the game continued to be end-to-end for the remainder of the half, it seemed likely that there'd be a few more goals.


One more big chance fell to Northwich in the first-half, and this time Hinchcliffe couldn't capitalise. A poor pass from the Grove centre-back, the first of many to come, was intercepted by Hinchliffe and his 30-yard lobbed shot headed towards an empty goal. As the home fans cheered what looked like a goal, the ball awkwardly bounced off the grass and just over the crossbar. After all that excitement, it was time for a break. The half-time 90's Dance Anthems began to blast out and I headed in to grab a beer before going for a mooch around the rest of Wincham Park.


My walk around led me towards the Witton Albion Museum, which unfortunately wasn't open. With a curiosity to see what was behind the legendary red doors, I scouted around for a side entrance to see if I could pop in have a peek. Instead, I found the haven of football groundsmen! I assumed that this wasn't a part of the museum, but I would also not be surprised if it was- a tardis of rakes, mowers, spades and ladders took me by surprise and it has to go up there with the old tractor I found at the Novus last season!


With the sites seen and the pint supped, it was time to get back to the action on the field as the second-half was kicking-off. In a similar fashion to how the first 45 ended, the opening of the second-half was fast and furious. Yaw Gyimah was looking feisty on the right-hand side of the Vics midfield tonight, and he was making some tricky runs off the ball. Having just about gotten away with the first poor backpass of the evening in the first-half, this next one was intercepted by Northwich's attacker who then tricked his way past the keeper before looking to finish. With a defender in his way, the lad instead passed to Gyimah who aptly slotted home the second goal. Vics 2-0 Grove. Straight from the kick-off, things almost turned worse for the away side who looked drained of confidence by this point. More poor passing led to the Vics hoofing a ball up to Dan Cockerline who is faced by the sweeping Burzynski in the Grove goal who took a boot to the chest in a 50-50 collision. As the ref ran over to produce a card, the question would be whether it was a challenge that could be seen as an honest challenge or a high boot- and the Ref obviously decided that it was a dangerous challenge as he gave Cockerline a straight red. The home fans were furious, and with half an hour to go this could be a big call against them. One fan shouted out with infinite wisdom "Ref, he was outside the box!"- clarifying the age-old rule that you can do any amount of damage to a Goalkeeper as long as he's outside of the 18-yard box.


With 10-men, the Grove had a chance to get back into the game- or concede a sloppy third. Whilst Kidsgrove pressing up the pitch, the Vics defence hit out a good clearance and the attackers began to hunt down the under-confident defenders. The pressure told at the back again, as one centre-back for Kidsgrove headed the ball past his own Keeper and into the path of a yet again well-placed Gyimah who grinned with delight as he confirmed the win for Northwich. Vics 3-0 Grove. As is often the way at this level, a side who are out of the game finally turned on the style. The third goal conceded by Grove seemed to hurt them enough to be able to find a goal themselves. Just a couple of minutes after conceding, Dan Turner found the ball in his grasp and lashed home a consolation goal, despite the best efforts of the Vics defender (who I'd thought at the time had scored an own goal!). Vics 3-1 Grove. The last 20 minutes saw a few chances come to the away side and the odd counter from the Vics. With the crossbar being struck by the Grove, a Northwich defender going in the book for time-wasting and even an off-the-ball scuffle in the 85th minute, the game concluded in an entertaining style that could've quite easily seen a couple more goals at either end. The final chance of the game fell to a Vics substitute though, and his 25-yard first-time hit was well held by Burzynski. The Ref called time on a good game of football and it was a second win of the season, and on the bounce, for Northwich Victoria on this fine September evening.

In a match containing defending that was more dangerous than a round of golf and a chat with Sam Allardyce, the Grove has proven themselves to be lacklustre in defence once again this season. I left the ground knowing that I'd no doubt watch the Grove at the Novus again this season, but in the meantime I'd like to end with a thanks to Northwich (and Witton) for a good night out in Cheshire and another Evo-Stik ground ticked off the list. Ground number 45, done a dusted!
Posted by Daz Knapton at 16:37