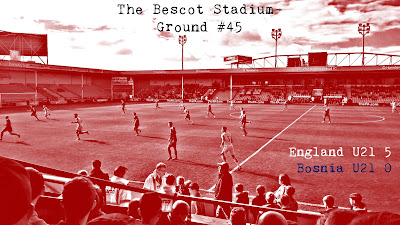 Enjoy England Football? Hate disappointing results and ultimate failure? Want to watch a competitive game of football for a quid?! If the answer to these questions is yes, an England Under-21 fixture is a must for any football fan.


From a football fan point of view, there are few perks in working a job that isn't Monday to Friday 9 til 5. Whilst other fans are prepping for the weekend days out to Woking, or a midweek evening jaunt to Carlisle, I am at work merely pressing refresh on the BBC Football page when I get a spare few seconds. Alas, this is no sob story of the woes of the working man, because today was the day that would prove to be a chance for me to catch some Under-21 international football. Yes, it was in Walsall, yes it was filled with school kids, elder-folk and the odd hooligan, and yes it was at a stadium where parking is a nightmare, but when tickets are just £1 you can't really moan too much (aside from all that moaning I just did back there).


For those of you who have travelled around the grounds, you'll know that the Bescot Stadium, home to League One's Walsall, is perfectly located just off the M6 and is about as generic a football ground as you'll see. An ideal location for an international fixture, the Bescot is a classic all-seater stadium which is just a stone-throw away from St. George's Park in Burton. Having visited Crewe's Gresty Road last year to view the only other International Fixture I've seen to date, Qatar vs Northern Ireland, the Bescot certainly had a similar look to it. I took my usual, albeit not-planned, walk around the stadium as I searched for the ticket collection office and then joined the shorter of the two queues to collect my ticket. Having pre-booked, I was able to waltz over and grab my ticket fairly easily, although I was approached at this point by a few members of Birmingham City's youth set-up. One of the lads spoke up to the rest and said "these are away fans." and before I could correct him, another shouted out "do they look Bosnian to you?" and therefore muting any attempt at a witty response I might have come out with.


The fixture itself was the final Qualifier match for the Young Lions, who had already secured the top spot in Group 9 thanks to last week's win away in Kazakhstan. Bosnia meanwhile were sitting bottom of the heap with zero wins and just two goals throughout the campaign. On paper, this was likely to be an easy run-out for the England side bursting with talent, however when the sides met in the reverse fixture back in November 2015 the score was 0-0. In front of a 5,000 plus audience this afternoon, I expected a good win for our boys and I stuck my neck out with a pre-match prediction of 3-0.
For those of you who aren't in the know about our Under-21 side, it really is a promising squad with Premier League starlets and Football League hotshots crammed into the fold, which includes the likes of Bristol City's loanee phenomenon striker Tammy Abraham as well as fellow Chelsea youngsters Ruben Loftus-Cheek and Nathaniel Chalobah. Elsewhere, the squad boasts promising Gunners defender Calum Chambers and even Saints regulars Nathan Redmond and Matt Targett are in there too! Like I said, hotshots galore! Today's opposition weren't quite so star-studded and it is fair to say that the majority of the squad was made up from Bosnian clubs young guns rather than household names. If you were to hold a gun to my head and ask me to select "one to watch" for the opposition, I'd probably have named Riad Bajic who plays for Turkish Premier League club Konyaspor. The lad was the top-scorer in the Bosnian League back in 2014/15 at the ripe old age of 20 and he has managed to grab a handful of goals at Konyaspor too as the number 10 for the club.


Following the usual display of fans passionately half-heartedly mumbling through the national anthems, today's Iraqi-born Swedish official, Mohammed Al-Hakim, got the game underway. England started off kicking from right-to-left (from where I was) and from within the first 5 minutes or so I was amazed. Considering my usual standard of viewing are either watching Kidsgrove Athletic and the likes of the Evo-Stik divisions at their grounds, or watching the often terribly dull England senior team's displays from the TV or radio, today's game started with a stunning blend of skillful possession play and fast-paced attacking. Abraham, who was starting his first match for the Young Lions, looked to possess cat-like movements in the area and from first whistle he was causing the defenders all sorts of issues. Needless to say that the opening goal was fairly SWIFT in arriving this afternoon, and it was just before the quarter-hour mark when the deadlock was broken. Reading's 21-year old box-to-box midfielder John Swift took the ball in his stride and unleashed an absolute stunner from about 25-yards out, which swerved in the air before resting in the back of the net. England 1-0 Bosnia. You don't see goals like that at Rushall Olympic, I can tell you that much!

Even though England had started ferociously, I'd be keen to see whether they would find it easy enough to defend against a weaker side in Bosnia, as that is one area we've all seen England struggle in over the past few years. It's not that the senior squad concede a lot of goals, but they certainly don't seem too confident at the back and with the days of Sol Campbell, John Terry and Rio Ferdinand long gone, I was hoping to see the next solid centre-back on display here. The stand-out tackler for me throughout the afternoon was Newcastle's Isaac Hayden, who has already had game time for Arsenal and Hull City prior to his move to the Toon. Any time the Bosnian attack rallied, they were soon sent packing by Hayden's assertive slide tackles and his powering defensive midfield display. One lad who stood out for me in the opening 45 was Marin Popovic, currently of Bosnian side NK Celik Zenica, and the number 23 was making some good runs down the right-hand channel in an attempt to give the away side a morale-boosting goal. Meanwhile, at the other end, it was time for a second goal. Still behind the 20-minute mark in the match, Spurs winger Josh Onomah had a go at the back-line of Bosnia and when his shot was well-saved by Kenan Piric, it would be the man of the moment, Tammy Abraham, who would be acrobatically on-hand to pop home the goal to double England's lead. England 2-0 Bosnia. With nothing to play for but pride, this second goal seemed to push Bosnia's team into upping the tempo, and through Popovic they had their first chance around the 25-minute mark. England were defending well though against any threat and with Dominic Iorfa looking like a young Micah Richards in the right-back position, the opponents often hit a sturdy England brick wall.

The remainder of the first-half was 50/50, with England creating a few more half-chances. The promising Duncan Watmore glided a shot over the bar before the break, and there was even a half-claim made for an England penalty. Despite the ref turning it away, the hundreds of school kids around the ground began to chant "penalty" repeatedly in an attempt to turn the referees mind. On top of this, when Bosnia won a corner at the other end, the kids in that corner began to comically boo taker Armin Cerimagic, which left me feeling like I was watching some sort of matinee showing of a pantomime! Before the crowd burst into "oh no he isn't, oh yes he is" chants, the ref called the game to a halt for half-time. England 2-0 to the good, and looking very good indeed.

Half-time dragged slightly without the classic half-time bevvy, but surely enough the game recommenced and the crowd gathered for another half of the beautiful game. Not long after the start of the half, and the first chance was forged by England. Onomah, who had almost scored earlier on, won the ball from a defender in the area who was trying to rid the danger, and he took a snapshot within a couple of touches and found the net for another England goal. England 3-0 Bosnia. With the result secure, some fans started to leave in an attempt to avoid the inevitable horror-show that would be trying to exit the car park. Meanwhile other fans got the part started, kind of, and with the thanks of the drummer and trumpet player it was time to get a Mexican Wave going. Regrettably, I was just outside the reach of the fun and could only admire the efforts made by the few who tried to get it going. Sorry trumpet man, I would've joined in if it made it over to me.
One player I haven't probably mentioned enough is Duncan Watmore. Within the hour he'd been on, he looked pretty good going forward and alongside Abraham and Villa's Jack Grealish the three were far the superiors of their opponents. For a third time, Duncan was sent through in a one-on-one situation and with 61 minutes played he this time delivered a cool finish into the corner of the away team's goal. England 4-0 Bosnia. And to add the final topping to a slick England performance, Watmore was again on the ball as he this time slid in Abraham after a sizzling run and when faced with an on-rushing goalkeeper there was only ever going to be one result. Abraham dinked the ball over Bosnia's number 1 to get his number two and England's fantastic fifth. England 5-0 Bosnia.

With 15 minutes left, Bosnia looked shattered and out of ideas. The long-ball game was being gathered up promptly by England defenders and the away side must've already been thinking about the flight back to Sarajevo. And then to throw in a final bit of punishment to the opponents, Aidy Boothroyd decided to throw on his subs, Demarai Gray and Nathan Redmond. When you are 5-0 down, that is not who you want to see coming on! With the attendance announced at 5,263 and Jack Grealish offered the Man of the Match Award, the clock ran down with England in full control. Redmond and Gray, of Southampton and Leicester City respectively, looked so pacey, full of confidence and between them they almost created a sixth. With not enough time for the players to grant the fans' requests of "we want six", the ref blew for the end of a firm England victory. Knowing, what was to follow, the ground erupted into pacey 70-something year-old's diving for the exits, school kids sprinting out of the fire doors and the non-driving folk holding up the way by standing at the front to cheer off the players. Foolishly, I stuck around to see the lads off the pitch too and all I can say is that after 75 minutes of sitting in the car park afterwards, I would be making a mad dash too next time!

Joking aside and forgetting the horrific traffic, I really enjoyed my time at the Bescot and it was nice to feel happy and pride-filled after seeing England play. Hopefully the Young Lions will do us proud in Poland next summer, and in the meantime I'm sure they'll be continuing to shine with their clubs. My next outing will be in Dundalk (WOOOO!) in just over two weeks, as Tom (Partizan Bristle) and I embark on the Groundhopping bonanza across 4 countries in 4 days. Look out for some great times as we do what we do best.