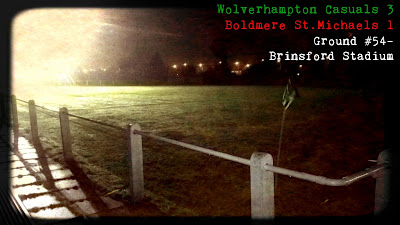 Happy 2017 footy fans! January is always a quiet time for me at work, which would mean that I could get back to my ground visiting ventures- starting with a trip to the Brinsford Stadium in Coven Heath, Wolverhampton. As with a couple of my past trips to the area, I called upon the services of my friend Mikey Southan to share some non-league action in the form of the Walsall Senior Cup. Mikey had so far visited some "luxury" non-league grounds such as AFC Wulfrunians' Castlecroft Stadium and Dales Lane, home to Rushall Olympic, so tonight's cold Tuesday trip to Level Ten Wolverhampton Casuals would be a real insight into the world of the lower leagues of English football.
To give a bit of pre-match background to the match ahead, it is worth noting that today's visitors were placed in the Ninth Tier of English football in the Midlands Premier League. The Sutton Coldfield based side were struggling in 20th place of the 22 team division, whilst today's hosts sit 4th in the West Midlands Regional League. Judging by this, it was likely to be a close affair in the Second Round of this regional cup and I had stuck my neck out to make a pre-match prediction of 5-4 to the away side.
With a 7:45pm kick-off, I'd made it to the ground just after 7pm and was greeted upon arrival by a drive-in ticket facility- aka a man in a hi-viz jacket who sold me my ticket before telling me to go "around the back" to park up. After bumbling my way over the pot-holes and passing the pitch to go around to a darkened car park, I dumped my car and walked around to the clubhouse. The facilities were minimal, to say the least, but the positive was that on this close-to-freezing evening, there was a bar located in the warmth. The negative, was that there was nobody around to ask questions and it took me a good few minutes to find my way into what was the "Boardroom", before being directed through a corridor out towards the Cass Bar- via a porch area of mishmash chairs. Yup, it was one of those grounds.


After navigating the externals of the facilities, I finally found myself in the warmth and with a tasty pint in my hand- hooray! As with any clubhouse at this level, there was a few official looking folk from either club, some worn furniture which added character to the ground and even the odd fan taking in a pre-match beer. Today's clubhouse was perhaps the smallest I'd been to, but on a good day I'm sure you'd find 30-40 of the Cassie massive penning themselves inside. Another thing which I love about any football ground you go to, is that there is ALWAYS a shed-load of silverware dotted about the place. Fellow ground-hoppers I ask, have you ever been to a ground with no trophies on display?
Speaking of trophies, today's Walsall Senior Cup match wasn't the only Cup competition that the Casuals are involved in. As I looked on the club's notice board I spotted that they were also into the Quarter-Final of the Staffordshire Cup, where they would face a very tough side in Stafford Rangers. It's always nice to see the local silverware is contested very forcefully, despite the fact that most of the competitors have exceedingly small squads and the fixtures do come thick and fast at this time of the year. Just as I finished my pint, I received a text from Mikey to say that he'd arrived. Knowing that the ground may not be the most accessible for me wheelchair-using chum, I popped out to see which would be the best way to get him in. Thankfully, the floodlights had now been switched on and we were able to seek out a ramp made from nature itself that he could use to wheel into the stand.

After a brief catch-up I passed on my limited (at best) info about the clubs and we were ready to be astounded by the magic of the Cup. The two sides came out- Casuals in green and Boldmere in what looked like the 2003/2004 Manchester United home kit- and before we knew it, it was game on. The fans trickled out of the various doors from the boardroom, changing rooms and clubhouse to take their seats, at which point a local caressed Mikey's arm and asked if he was alright. A strange, albeit sincere, interaction that will remain in his mind for time to come! On the pitch, the Casuals had made a decent start and looked intent on taking an early initiative and with just under 10 minutes gone they had forged a chance to open the scoring, however this early effort found its way into the conifers behind the goal. This was a sign of things to come though, and with both sides now showing intent, you could smell a goal in the air.


With roughly 13 minutes on the clock the Casuals took the lead through a quite confusing goal. From where we were stood, it appeared that the cross of the Casuals winger was punched backwards by the Mikes keeper into a midst of people around the goal-line, which was followed by a clearance and then a split of appeals from the players to state it had crossed the line. With little hesitation the Ref gave the goal, which I can only say would have been classed as an OG from the goalkeeper's punch. Either way, the goal was given and the side from the Division below had taken an early advantage. Casuals 1-0 Boldmere. This moment of somewhat-confusion had, at the very least, woken the visitors up and they tried to press on themselves for an equaliser. After a good 40, maybe even 45, seconds of attacking play they were back into the game. Ben Usher-Shipway scooped in a cross and it was met by Jack Skinner who nodded the ball into the net, leading to a fair amount of cheers from the visiting crowd. Casuals 1-1 Boldmere. The 40 or so people in attendance, who seemed to be largely away fans, seemed likely to get the thriller I'd predicted at this point and we awaited the flood of goals at both ends. This was not the case though, and it wasn't until just before half-time that we'd see another goal. I wouldn't say it was worth the wait, but the third goal of the game was certainly a very nice finish. A good ball came through to Kev Nickle in the Boldmere final-third and as he ran towards the goal the angle closed down on him as he ran off-centre from the target. Alas, he picked his spot and awaited the on-rushing Stuart Parsons before slotting it nicely past him and, with a dink off the post, his finish found a way into the goal which would mean that Wolves Casuals would hold the half-time advantage over the Mikes. Casuals 2-1 Boldmere.

The game had by no means been a contender for match of the season, but at least we'd seen a couple of goals. So far, Boldmere St.Michaels had looked poor and they had been aptly punished by a feisty Casuals outfit. Fair play to the home side, they'd given their opponents a good game so far. With the need for food, I popped over to grab a tray of chips and I found myself amongst a small gathering of the crowd who all appeared to have a hankering for Cup-A-Soup. After being given a generous helping of fries for a meagre £1.60, I then re-joined Mikey for the Second-half. With half an eye on the game and the other half on my beer and chips, I am sad to admit that I actually missed the third Casuals goal. When I'd looked up last Boldmere were asserting dominance and looked to grab an equaliser, but then as my eyes rose again I was witnessing the keeper picking out the ball from the net after an apparently sloppy goal. That's football for ya! Casuals 3-1 Boldmere.

For the remainder of the game, Boldmere pushed and tried to get back into it. They made a couple of changes up top, they carved many chances, and through substitute Dean Wellington they hit the post- but in all honesty they just didn't look clinical enough to get the much-needed goals. A few fans had started to mumble about the need for a finisher, whilst others turned their frustrations to the officials, but either way it would prove to be an uninspired end to the match and it would be the Casuals who progress into the next round. Whilst the Mikes will travel to Walsall Wood in search of points that will hopefully take them away from the drop zone, Wolverhampton Casuals are at home again at the weekend, where they face Ellesmere Rangers in a 4th vs 6th clash. A third outing of the season for Mikey and I will hopefully not be the last, and I'll certainly be back in action at the weekend as I hope to head to Evans Park to see the mighty Stafford Town take on Studley for what will be a proper basement battle. Roll on Saturday for more footballing goodness!
Posted by Daz Knapton at 10:55