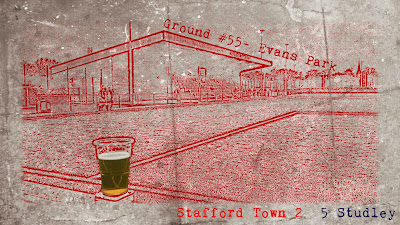 Having lived in Staffordshire since 2010 and worked in the County town of Stafford as of 2012, it would be considered criminal amongst the groundhopping community that up until today I had not visited Evans Park, a ground which was basically on my doorstep. My original destination for the day was supposed to be The Bescot Stadium as my pal Tom (Partizan Bristle) was coming through to watch his beloved Bristol Rovers take on Walsall, but as I'd already visited the ground back in October for an England U21 game, I decided to ditch a second visit and instead took the opportunity to watch a Midland League Division One six-pointer between Stafford Town and Studley- meaning that I would finally complete "the big three" of Stafford.


This fixture would be my second of the week, after seeking out some Walsall Senior Cup action on Tuesday night with my friend Mikey, and upon entry it seemed that Evans Park was going to be a very different experience to that of the Brinsford Stadium. Arriving to a very modern and well-maintained ground, the first thing I noticed was the 3G pitch. I had already seen the grand stand from a distance as I'd passed the ground on numerous occasions, so that was no surprise, but nevertheless it was very impressive when I stood inside for the first time. Wasting no time, a man approached me as I ogled the facilities on show and he asked me where I'd travelled from. After telling him the tale of my mammoth journey from Stoke-on-Trent, he informed me that I wasn't the only groundhopper here today and I certainly hadn't travelled as far as the two lads who'd apparently come down from Kendall, nor the guy who was here from Derbyshire in seek of Evans Park. Heck, I hadn't even travelled as far as today's Brummie opposition who had made a 55-mile trek from south of Redditch. I was in fact one of the locals on this cold afternoon.

As I continued my chat with the friendly gentleman, it came to light that he was in fact Gordon Evans, the Chairman and founder of the club! It is always nice to get chatting to the bigwigs of non-league football and I was even able to pick Gordon's brain about his aspirations for the club. Safe to say that after spending forty-years running the club, thousands of hard-raised money on a 3G pitch and a stand, he is hoping to build up the club to go on to the next level. Being one league below Brocton and three levels below Stafford Rangers, the club were having another tough campaign this term and before the start of the game they were sitting third-from-bottom of the table, with Studley being one of the two teams below! Both sides are fighting to avoid the drop and with Southam United yet to win a game in the League this season, it seems almost certain that the other relegation spot is the only one to fear. I had made my usual pre-match prediction, going for a 2-1 Stafford Town victory, but I doubt that anybody at the ground would have seen this scoreline coming. After I grabbed myself a can of beer the teams came out and observed a minute's silence in honour of Jack Skelton, the 81-year old who had a huge input in Stafford's youth football teams. A very nice mark of respect and one that was reciprocated amongst the many youngsters in attendance.
As the game kicked-off the subs came over and took their seats, which was basically just one row in-front of me, and it would be from the Studley bench that I would get an in-sight into life as substitute for a non-league side. The first fun moment came as one of the lads on the bench shouted up to the back of the stand "Dad, the Blues are winning" before the lad next to him came out with "fuck the Blues!"- classic Brummie banter. On the pitch, Town had made a positive start and the attacking runs of the Reds number 9 stood-out for me in the early proceedings. Despite this though, it would be Studley who would have the first real chance as they won a free-kick in a promising position. The tame effort went straight into Degg's waiting arms, and just seconds later Town almost got the opener themselves as Ryan Pace whipped a left-footed strike over the bar. This was my third time watching Stafford Town, having seen them lose 0-8 against Sporting Khalsa last January and then beating local rivals Uttoxeter Town on Boxing Day, and there were certainly a few lads out there today who I recognised from my trip to Oldfields Sports Ground. With the Jaap Stam lookalike sat in the holding midfield position and the left-back with a ludicrous hair-do both playing their part again, it was a solid opening 25 minutes for both sides so far. Meanwhile on the bench, one of the subs turned to the other and asked "what league is this?"

Despite the humour I was overhearing off the pitch, my attention was firmly on the game and just before the half-an-hour mark Studley would score the opener. The attacking-midfielder for the Bees pulled out a Paul Scholes styled pass out to the pacey right-winger and he provided an intricate touch to knock the ball past the keeper and into the goal. Stafford 0-1 Studley. First blood to the visitors meant that Stafford would need to turn their game up- but unfortunately that was not the case as they instead decided to fall asleep at the crucial point of the first-half. Studley pushed on and the number 9 up top for the Bees was in buzzing form, finishing off an attack shortly after the first goal to double the lead of the visitors. Stafford 0-2 Studley. And as if that wasn't bad enough for the home side, they would see another the ball nestling in their goal again just 30 seconds later. The away striker ran on to a pass again to tuck the third goal in. Stafford 0-3 Studley. Surely that would be a lesson learnt for Town? Wrong- and just four minutes after the quickfire double from Studley's lethal striker, he almost completed an insanely quick hat-trick as his header crashed on to the bar. Fortunately for the Reds, this one didn't go in and they would make it to half-time without dealing themselves any more damage.

At half-time I popped into the Clubhouse and grabbed myself another can of beer before sitting amongst the sad-faced fans who had turned their attention to the half-time scores on TV. I slurped my can and headed on out for the second-half, ready to see whether the poor showing would continue or if Stafford Town could give a bit of fight and try to force themselves back into the game. With two subs coming on for the home-side at half-time, the Reds did in fact give it a go and the second-half was 50/50. There were few chances for either side until the final 15, which is where we would be treated to four more goals. Stafford Town opened their scoring on 75 minutes as a Ryan Pace free-kick was hit home despite the away keeper getting a touch to it. Stafford 1-3 Studley. The Reds were in full-swing now and just before 80 minutes Pace would this time become the provider for substitute Jack Hepple who turned in a good strike- game on? Stafford 2-3 Studley. For a few minutes, the red-shirted Stafford side could well have been Liverpool and Evans Park seemed to turn into Istanbul's Champions League final of 2005. Could the comeback be complete, or would their attacking drive be halted?

In the end, the crucial moment came on 86 minutes as Callum Whittaker was sent off for a lunge and the following free-kick ended up being poked in to break Stafford hearts. Stafford 2-4 Studley. With a dose of salt being lined-up for the Stafford wounds, there was to be a final twist in the tale and as Studley pushed to kill the game off it would be number 9 who found himself one-on-one with the goalie. As the striker rounded the keeper, Degg latched his gloved-hands on to him and brought him down to concede a penalty in the final minute. With a chance to finally claim a hat-trick, the Bees man took a run-up and hit his strike goal-wards, only for it to be saved very well as Degg made up for conceding the spot-kick. And yet, this was still not the end of the day, as the seventh goal would come deep into injury-time. The substitute striker for Studley, who'd scored the fourth Bees goal, awaited a cross into the box and after the ball bounced up towards him he hit a fine close-range volley into the net. Stafford 2-5 Studley. That, as they say, was that. Stafford Town had crumbled to a poor home defeat and they showed no sign of picking up a third clean sheet on the bounce. I said my goodbye to Evans Park and headed back home knowing that I'd certainly had my money's worth today. Despite some poor defensive frailties, I have faith that Stafford Town will just about keep their heads above water this season and hopefully they will carry on improving this modern ground to become a ground capable of rising up the Leagues. Easier said than done, but good luck to them!