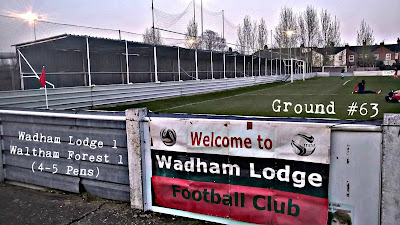 Monday Night Football returns to 'Pint of Football' for the first time since a Halloween outing to Keys Park, so the pressure would be on for Wadham Lodge and Waltham Forest tonight to live up to my high standards of beginning of the week football as they faced-off in the Gordon Brasted Memorial Trophy Quarter-Final.


To give my usual followers a bit of a background on these two Essex Senior League sides, Wadham Lodge and Waltham Forest are very similar sides in many ways. One key feature of the two sides is that they have an agreement to share the Wadham Lodge Stadium, which came about after the Foresters left the ground empty in 2008- meaning that the Lodgers would form as a new club to inhabit it- and then the old club came back just a few seasons later. Another thing that keeps them close is their current campaign in the Essex Senior League, in which the Foresters sit in 13th and the Lodgers 15th. Following all of that? Good.


The main difference between the two clubs is of course that Forest have been going for 53 years, whereas Lodge are still youths of the game with just 9 happy years of existence. Walthamstow's two sides had been drawn together for this Regional Cup last 8 match and although the Lodgers had played just 2 days ago in a 2-1 League victory over Burnham Ramblers, they would be well up for this derby match, the potential to get to a second consecutive Semi-Final and hopefully go one further this time around. The sides had already met this season and in the "home" fixture for Wadham they won 2-0, meanwhile their "away" game they lost 1-3. All of these factors point towards a close encounter and my pre-match prediction was for a draw.


After scooting across the M25 from Southend and down the M11 I soon found myself at the ground and was surprised to be parking up in a very busy car park. What I originally thought was masses of derby day fans from either side, turned out to be people using the many 5-a-side pitches surrounding the ground. I ploughed my way through to the old-looking stadium, which sat amongst the many new pitches looking like a tired relic, I knew that I'd reached my destination and looked forward to the game. Initially I struggled to seek out the Clubhouse, so I instead sat in my seat devouring quiche amongst the Main Stand in the west of the ground, as you do, whilst I studied the training routines of both sides. As with the outside of the ground, the innards are very warn and although there was notable repair work done to the stands to keep them stable, Wadham Lodge Stadium certainly isn't in the same category as the Evo-Stik and Midland League grounds I'm used to casting my eye over. I mean, to think that this ground sits on the same level of the pyramid as AFC Wulfrunian's Castlecroft Stadium is a bit of a mad one really, but with respect to the inhabitants it is about the football teams, not how fancy their ground is.


I always admire a ground like this because I appreciate that the work, done largely by volunteers, is tough at this time of the season and having seen similar sights up and down the country I can usually tell that the person who left the tools scattered around the ground has probably only just finished using them in time for the game. There were many similarities to Clapton's Old Spotted Dog Ground in that it wasn't a showground for Groundhoppers like me to come in and point out the bags of sand left around the pitch, or the random basketball net sat next to a cement mixer- no, this is a ground for the fans and for the community of people who keep this club running. Another similarity is that when I visited London's oldest ground back in August, it was also to watch two sides who share the same ground. As is often the case, kick-off soon arrived and the sides came out ready to do battle. The 40 or so folk in attendance tonight had to wait until the second-half for the opening goal, but in the meantime there was some quirky features to comment on. For much of the time when there was a low-tempo build-up to Forest's attacks, a man was marching up and down by the Main Stand shouting random things at the Waltham Forest players nearest to him. I could clearly see that he was not the manager, but I wondered if this was some sort of method of having a tactical expert on each side of the field, or whether the local madman/ultra had taken it upon himself to give the players advice. Either way, they seemed to listen to him. The stand-out player for Lodge in the first-half in my opinion was the left-winger sporting the number 11 shirt. Not only did he have a keen eye for winning possession, but he also knew how to keep it! Many a time did he collect a pass around the halfway line, and within seconds the ball was somewhere near the Foresters box. At the other end, the left-sided centre-back for the "away" side looked very strong and competent amongst the three-man defence. Amongst some adequate, albeit startling play in the opening-half, there was also a moment where a player said to his opponent, "hey, stop sneezing on me, man!" and without anymore highlights or nasal mucus hurling to report on it was half-time.


I followed a few thirsty-looking chaps out of the ground's walls, up some stairs in the sports reception, down some stairs, around a corner and eventually into the holy grail that was THE BAR. Needless to say, I purchased a pint of lager and took pleasure in the always wonderful option of being able to take it back outside to slurp on during the final half. Although I had not been too impressed by the game so far, it is worth noting that the fans seemed very buoyant and I can only think in hindsight that I may have been setting my sights as high as the two international U19 games I witnessed last week at St. George's Park. I'm not usually a snobby international kind of guy, I swear!
With the weather now turning from "alright" to "bit nippy", I started to have flashbacks of a very cold night at Winsford back in November in which a thrilling match against my beloved Macclesfield Town went into Extra Time. I was praying that this would not be the case tonight. First, Lodge went close as the Forest keeper accidentally sliced his kick to the Lodgers number 9. His shot was eventually saved and the following corner was crucially cleared off the line from the resulting corner. Just minutes later, Forest were up at the other end and a good cross on 62 minutes created the opener- which was headed in across the keeper from the left, by Foresters winger Konate. Lodge 0-1 Forest. With first blood drawn for the side playing in white, the reds now had to come out and look for a goal themselves, and they almost did shortly after the goal. On the break, the Lodgers number 10 worked the ball past the keeper and left his strike-partner with a chance on the volley. In the most comical of unfortunate incidents, the aforementioned volley from the number 9 eventually struck the anus of his team-mate and therefore denied him the equaliser this time. He was not too upset though, and with just 10 minutes left on the clock it would be the striker pair that saw the Lodgers get their goal. Despite Fores playing well and looking good for a second, a break eventually fell to the red number 9 again and this time me tucked away a very precise and tactful finish to bring the game all-square. Lodge 1-1 Forest. The final ten minutes of the game, which should have been filled with end-to-end efforts to take the spoils, was stop-start nonsense from tonight's referee. After stopping the game for well over 3 minutes to have a natter with one of the substitutes, which eventually boiled over with one fan shouting out "what you gonna do Ref, tell his Mam?", there was then a second stoppage which went on for so long that Mr. Wilson had to ask his Lino what he'd originally blew his whistle for. Eventually the game ended with roughly 98 minutes played, and the music to my ears was that it was going straight to penalties.
The shots came in thick and fast with both sides scoring 3 of the 5 kicks to start with, and then as sudden death kicked in we saw two more rounds of spot kicks. The fourteenth penalty proved to be the final one and thus Waltham Forest were through to the next round. On the whole, I do believe that they were the better side on the night and I'm sure the red-shirted Lodgers will bare no grudges over this hotly contested affair. The victors will now have a day off before their Wednesday night away match at Eton Manor (which I may or may not attend), meanwhile the Lodgers will now have a break until Saturday before facing West Essex, the side that are currently sandwiched in-between Wadham Lodge and Waltham Forest. For me, I'll be taking a trip to Hullbridge tomorrow to see Sports take on Burnham Ramblers in yet another regional cup match.