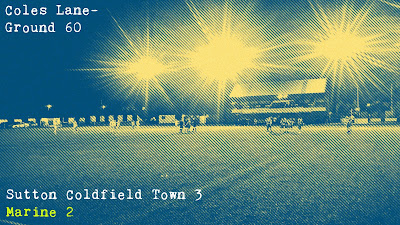 Ground number 60 for me tonight, and I'd be lying if I told you all that I'd expected this to end up being a classic. Following my trip to Dulwich on Saturday for a great day of FA Trophy Quarter-Final action, I was looking forward to getting back into my stride and crossing-off yet another Evo-Stik ground. Tonight's target- Coles Lane.


By lunchtime games in the North were already being cancelled due to waterlogged pitches or snow, and further down the Midlands and into the South grounds were dropping left, right and centre due to more severe rain. As I left to get to Sutton Coldfield from Stafford, I knew not for definite if the match would be on and my only hope was that Coles Lane hosting a 3G Pitch would save the day. To lower my expectations further as I sat amongst the rainy traffic-ridden M6, the radio station I had on kept stating that the only game that was still on was Villa vs Bristol City- and to be honest, I really didn't fancy the sound of that! With roughly 20 minutes to spare, I arrived in the north Birmingham town and parked up just off of Coles Lane ready to head over to the ground. With little in the way of signage, I eventually walked past a white sign on the side of a house pointing me in the right direction. As I headed down the dark roadway I eventually saw a floodlight peeking over the housing and I sensed optimism as I headed towards the light.


As I handed over £10 to the nice chap at the turnstile, I was finally inside the ground and ready for some Evo-Stik action between two sides in the wrong part of the table. The hosts were 9 points clear of safety before tonight's match and their opponents sat just above the relegation zone, meaning that there was all to play for as both sides aim to climb up the table and hopefully avoid a dreaded relegation. I had already seen both sides play, and lose, once each during my time visiting football grounds and I predicted this game was going to be as dull as the weather- 1-0 to the home-side was all I was going for. As kick-off loomed I had just about enough time to dash into the clubhouse and buy myself a pint to take into the main stand. I don't know what it is about these guys, but they certainly like the dark- I entered a dimly-lit blue bar area and approached the barman to ask for a beer. After asking me for ID, the chap then apologised profusely for asking a man of the same age as him for identification. I really didn't mind, and shared a laugh with him as I fumbled around for change against the darkened corner of the bar. It was nice to see the bar area with plenty of people in and there was a few travelling scousers about too, making for an overall nice atmosphere. The only match I had seen Marine play was also an away match, at Moss Rose in an FA Cup Qualifier back in 2012, as they lost out 1-3 to my beloved Silkmen. Meanwhile this season I witnessed Sutton Coldfield Town lose a Halloween match by four goals to one at Keys Park, in a tough outing at Hednesford Town. With neither side in top-form leading up to this one, my 1-0 prediction was based solely on the fact that The Royals had not played at the weekend and would be fresher than their Merseyside visitors who had clawed back a 3-3 draw against fellow-strugglers Frickley Athletic on Saturday.


The opening to the game was pretty timid and with ten minutes gone there wasn't much in the way of chances. Thankfully, I'd spent a good proportion of the opening exchanges admiring the main home stand in all of it's glory. A raised seating area is always I feature I enjoy and this stand-alone masterpiece was as impressive as they get in my eyes. With the rain now pouring down again, I thought I'd treat myself to a seat up there with the elders of SCTFC to observe the match. I'd just about took a seat in the well-sheltered stand when the first real chance went begging- Josh McKenzie was the man to go close on this occasion and as his header on 14 minutes went just past Paul Phillips's post.


So far the best player had been James Beresford in my eyes, and the right-back seemed to show a great understanding of the defensive and attacking aspects of his role. Alas, it would be from a set-piece that the opening goal goal came about- and on 26 minutes Ryan Robbins effort went in to give his side the lead. Sutton 1-0 Marine. After shouting down to the home manager for confirmation of the scorer, the announcer did his duty of telling the 120 or so in attendance of the first goal, before letting everybody know that a local Referee's Association was sponsoring the match. He concluded by asking the fans "not to make comments about the refereeing tonight please". More on that later. Meanwhile back on the pitch we had almost seen a speedy reply from the visitors, but Grogan's header was stopped on the line by several standing-by defenders. With half-time now approaching, Marine went close again and this time it was a Michael Brewster volley that was well-saved by James Wren in the home goal. As the seven "Sutton Coldfield Town Ultras" looked on as their side defended well, a counter-attack led to a corner and eventually the second goal- Captain Townsend nodded in to put the hosts well in control at half-time. Sutton 2-0 Marine. Thinking back to the comments of the announcer from the last goal, one quick-witted scouser echoed from the stand "Ref, can you sponsor us next week?" and with that, it was time for a break.

Whilst in the bar at HT, I noticed some folk donning Rushall Olympic clothing- wish I'd donned my Olympic scarf, purchased during my trip there in August. I plodded around the ground for a bit longer and then went back up to the Gods for the second 45. Not much had changed weather-wise and with on-and-off rain beating down, I was glad to see the half start with a goal to raise the heat at Coles Lane. For the third time, the goal yet again from a set-piece and this time it was a free-kick. Marine's kick landed eventually in the 6-yard box and with the ball seeming to bobble about for ages, Peter Wylie eventually booted the ball into the net- "Fucking shit! Embarrassing goal, SHIT!" was the only way Richard Sneekes could describe it from the bench, as the away side sensed another comeback. Sutton 2-1 Marine. And if that was the bad, hold on to your umbrellas for the great. On 52 minutes, Kenny Strickland stood 30-yards out with a dead-ball situation in a central position. He swiftly pelted the ball past the wall and on to the underside of the bar, before watching as the kick finished-up in the back of a motionless Wren's net. Sutton 2-2 Marine. With four goals from four set-pieces, we weren't finished yet either. Just 3 minutes on from the 4 minute comeback of the travelling side, Marine conceded a contentious free-kick in a dangerous crossing position. Not fancying a crack at a wonder-goal like Stickland's, the Royals taker dinked a pass into the area and after a certain amount of partial clearance from Marine, the ball fell to Aaron Birch in plenty of space from 18-yards. He took the ball down well and after letting it bounce, he guided the ball past the rushing Mariners and in for the winning goal. Sutton 3-2 Marine.

There was a few more chances to come and some particularly poor refereeing calls. Sorry, I know the guy said not to comment on the ref. After Matty Hamilton struck the side-netting from a volley for the away team, Ryan Robbins had a go at the Mariners defence. After showing the touch of Zinedine Zidane to waltz past the back-four, he then showed the finish of Nate Blissett from 25-yards as his kick cleared the goal by at least three times in height and twice in width. By the end of the match both managers seemed to be fed-up of today's official, ironically named Mr. Law, and with 75 minutes gone the two managers joined for a cuddle as they consoled each other over some of the things that hadn't done their way. Amongst all of this embracing, Montel Gibson came off the bench and netted a fourth home goal, but unfortunately for him it was chalked-off for offside. Both sides could've got a goal or two more at the death, but there was to be no more action there and the game would end 3-2 to the hosts, who now sit just six-points off Marine and of course that desperately sought after place outside of the drop-zone.

After the worst drive ever back to Stoke- taking well over two and a half hours- I think that I'm going to take on a more local ground at the weekend, and if all goes to plan I'll be at Pershall Park on Saturday to see Eccleshall take on Silsden. In the meantime, thanks to Sutton Coldfield Town and Marine for putting on a great evening of football at a lovely non-league ground. The Evo-Stik leagues are always my favourite level of footy to watch, and I'll look forward to many more grounds over the next few years. Good luck to the Royals and Marine in the fight for survival!
Posted by Daz Knapton at 15:20