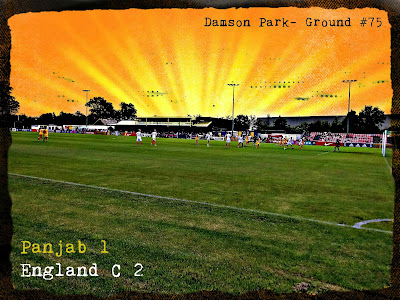 International football in Solihull- yup, you are reading correctly. Yesterday afternoon I made the trip to South Birmingham in order to take in my final game of the season. Aside from this being a non-competitive match, it was a pretty huge deal for the Panjabi people who would see their side become the first South Asian team to face an English national team. With this being a free match at Damson Park, it was always likely to be a busy afternoon and this would make for a great 90 minutes for all involved.
Thinking that an hour would be long enough to get over to Solihull from Stoke, I left just before 2pm and found myself making good time on the M6. Arriving with ten minutes to spare, I was met by a chap from the security team who informed many of us that the ground's Car Park was full. For anyone who knows the ground, they will be aware that Damson Park sits on a fairly busy road and I was therefore shocked to see many a plucky fan dumping their car on the outside lane of the dual-carriageway. With now just moments until kick-off, I took my chances and followed the lead of some of the other fans, parking up and running in to grab a seat for the match.


With a surprising amount of Stewards and Security on-duty, I quickly found a chap giving away programmes and then had a wander around to find a prime viewing location. My first impression of Damson Park was that whereas it did not seem as luxurious as some as the National League grounds I've visited, it certainly has a good non-league charm about it and with a pretty fulsome crowd in from all areas of the country I was pretty impressed overall. The bold blue and yellow painted wooden features around the ground and the double-decker main stand were particular highlights for me, but I wasn't just hear to see the ground and I quickly turned my attention to the action on the pitch. England C, formed in 1979 as the "England Non-League Team" had started fairly strongly against their Panjabi opposition and with the likes of Lincoln City's Callum Howe and Chester's James Alabi, who I'd seen play and score for Stoke City U21's in a friendly versus Macclesfield Town a few years ago, the Non-League Lions were considered as favourites for the match despite Paul Fairclough naming a pretty inexperienced side. For the Panjab side, Reuben Hazell's starting eleven also contained Non-League names and most of these seem to be based in and around the Midlands out of clubs varying from Stourbridge to Kidderminster.


Knowing only that both sides were made-up of players outside of "the 92", I didn't have much background info on the strength of the Panjab XI but I did read that they had reached the ConIFA World Cup Final in 2016, losing on penalties to hosts Abkhazia. Thanks to this, I made a pre-match prediction of a 1-1 draw as I fancied Panjab to give it a good go and prove their ambition against England C. With 19 minutes gone, Gurjit Singh made the most of a good bit of build-up and popped the first shot on target in to the thankful hands of Gateshead's James Montgomery. At the other end Ash Malhotra took a chance in the Panjab goal by trying and failing to take on Darren McQueen, but thankfully his blushes were spared as an eventual shot from Gus Mafuta went just past the post. A couple more half-chances came and went for England before the opener came on the 33rd minute. McQueen, of Ebbsfleet United, was played in and he chipped the ball over the floored Malhotra before watching as his effort bobbled towards the line. After a couple of shape-shifting bounces on the rugged six-yard box the ball eventually crossed the line and a generous cheer was afforded by a good portion of the fans. Panjab 0-1 England C. With no more goals to come in the first-half, I headed towards the clubhouse in preparation of a half-time bevvy. As I headed around the ground, I saw all manor of fan watching the game and it was a great sight- within moments I walked past a Barcelona shirted supporter and a man in a Blyth Spartans top. They literally had it all, from proud Panjabi's to a couple of Halifax Town supporters- and even the Sporting Khalsa Manager.
The whole of my half-time ordeal was spent awaiting a Coors Light from the bar. After being overlooked a couple of times in the queue, I eventually placed my order only for the barrel to come to its unfortunate end. The things one must do for a beer, ay? I swiftly supped up whilst chatting to an Asian Everton fan about the decline of York City, before heading back out to see the Second Half- and it is a good job that I went out when I did!

Gurjit Singh was stood over the ball for a Panjab free-kick just after the 50 minute mark and after England's Montgomery flapped at an attempt to save it, he instead knocked the ball into the box and it was Coventry Sphinx's Rajpal Virk who reacted quickest to notch home a historic equaliser for his team- game on! Panjab 1-1 England C. With the game now all-square I was very interested to see if England would pick up the pace and grab a winner or whether Panjab would build on their equaliser and steal what would have been an amazing win. Unfortunately for the South Asians it would be the former and with just over an hour on the clock Darren McQueen slid into a cross from the left and doubled his tally for the day, whilst also providing what would prove to be the winner.
Panjab 1-2 England C.


Now that England had restored their lead, they started to take the confidence of the recent goal to build a pretty dominant display for the final part of the match. Alabi and McQueen were a good team up-front, providing a good combo of pace and power as they looked to kill the game off. As we went into the final moments, Panjab gave it one last throw of the dice and started to attack a bit more, but looked suspect to concede on the counter as a few England subs threatened. Alas, there were to be no more goals and for the second time in a week I'd seen a 2-1 victory in what was a decent game. I'd been treated to the competitive thrill of Limerick's late victory in Dublin on Tuesday night and this game was more friendly in both name and nature, but that's not to say that I didn't have a great time and I left feeling a lot of admiration for Harpreet Singh and what he has achieved within the Panjabi community by founding the Panjab FA from within the heart of many Indian and Pakistani people alike. Good luck to them with future progress and also best wishes to the England C squad as they continue to prepare to face Slovakia in the prestigious International Challenge Trophy Final over the summer.

Thanks again to everyone who has had a read at one or many of my entries this season. My 47th and final write-up was a joy to write as always and all that's left to look out for from me now until July is my end of the season review, which I'll hopefully get on with in the near future. See you all next season!
Posted by Daz Knapton at 08:37