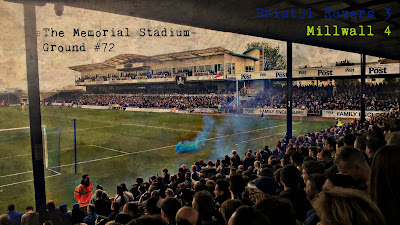 It has been on the cards for a while, but finally yesterday afternoon was to be the time that I would make my first trip to League One's finest, Bristol Rovers. With Partizan Bristle being a season ticket holder at the Mem, he finally persuaded me to take a ride over to north Bristol in search of finally seeing a decent showing from the Gas. Before this match, I had seen the blue side of Bristol play three times; a goalless bore fest at the Moss Rose against my beloved Silkmen, a 1-1 draw at Wembley as they edged out Grimsby Town on penalties and more recently a 1-1 draw in Burslem during a lacklustre display at Vale Park. So far I had been less than inspired by Darrell Clarke's on-the-up club when watching in person, but I have of course been following their brilliant progress over the past few years and it is safe to say that I am a big fan of what he has achieved. I couldn't think of a better opportunity to visit the Mem than this one, and at the time of booking the tickets this tie could well have been between two sides fighting for a play-off spot. Rovers have won promotions in the past two seasons and they had come close to sneaking into the final place this season for a chance to get into the Championship, but a defeat last weekend to Peterborough United meant that they would not be joining their rivals City in next season's second-tier. So with promotion no longer possible it would simply a case of trying to be party-poopers for the Gas on the final day of the season, and they would be sent out for to try and prevent Millwall holding on to the last play-off spot.
With a capacity crowd of eleven-thousand expected to roll out of bed early for this noon kick-off, I felt pleased to be amongst the masses behind the goal in the North Terrace, ready to cheer on the boys in blue. My pre-match prediction today was for a 1-1 draw, which may well have been enough to see the Shrimpers pip the Lions to 6th place. Needless to say that Millwall had bought out their share of the tickets in advance and the club with one of the worst reputations in England for fan violence had descended on Bristol with the aim of taking the spoils in a very important away day. I had only seen Millwall play once before this game, and that was in the FA Cup Semi-Final back in 2013 where they lost out to Wigan Athletic in a match that will sadly be remembered for the hooliganism that featured throughout their day at Wembley. The scene was well set, and as Tom and I reached the gates to the Mem at 11:30am we were ready for battle.

Inside the ground amongst the full-house were a couple of people I'd come across on Twitter through Groundhopping conversations. Before the game I was introduced finally to @goneforaburtone who I have shared many a like and retweet with online before putting a face to the name. After waiting to see if we could sell Tom's spare ticket surrendered by his Dad, we eventually headed into the ground and filtered into the stand in time to watch the pre-match announcements. With Rovers announcing their decision to release a few players after today's game, there was a lengthy set of calls to wish the best of luck to the guys who were bowing out. With the clock now reaching noon, it was time to give a final shout of respect to the likes of Steve Mildenhall and Lee Mansell before kick-off. The teams soon came out ready to play, and the game was underway.
In the early proceedings it was all Millwall and Shane Ferguson soon tested the Rovers on-loan keeper Joe Lumley, but his shot was punched away to relieve the danger for a moment. Despite this, the first goal was soon on its way and with just 5 minutes on the clock the away fans were in wonderland as they took the lead. A corner was looped into the box and after a flap about from the Rovers defenders, Lee Gregory saw the ball over the line. Rovers 0-1 Millwall. The Lions continued to roar and they continued to go forward in numbers against a rocky Rovers defence. Veteran striker Steve Morison was looking dangerous and even with his advancing years he was proving to be more than a handful for Lockyer and Clarke-Salter in the heart of the Gas defence. After 15 minutes of the hosts struggling to carve a real chance, one group of fans behind me started shouting out generic fickle fan things like "urgh, we need a striker!" and "we need a fresh start", as if they had forgotten that their striking issues were largely down to the departure of the Dark Lord of Bristol on deadline day in January. Millwall on the other-hand were not looking bad at all in the striking department and it looked likely they would be testing Lumley again before long.

With 25 minutes now gone, Millwall had the ball on the corner again and with lessons hopefully learnt from last time Rovers would prepare to defend. Unfortunately they had not took note of their poor defending earlier and Lions captain Tony Craig doubled his team's advantage. Rovers 0-2 Millwall. It was either do or die now for Rovers and with Ellis Harrison and Jermaine Easter giving a bit more for their team up top now, they finally got themselves a goal and a way back into the game. Just after the half-hour mark the Gas midfield went forward and an eventual deflected shot fell to Easter, who managed to smash one home on his final Rovers outing. Rovers 1-2 Millwall. The match was already turning into a classic and after seeing 5 goals just 21 hours earlier at The Creek, I was starting to feel a bit spoilt for goals.
As the game continued to be hotly-contested on the field, the fans in the North Terrace started to look over to their left as numerous police vans drove over to the outer part of the ground. Knowing that some home and away fans couldn't get into the ground due to it being sold out, I expected that this may well have been some feuding fans and for the next five minutes it seemed that vans were in constant flow getting the trouble sorted. Back on the field I just about caught sight of Lee Gregory finishing off another Millwall move and adding his second goal for the afternoon, Millwall's third. Rovers 1-3 Millwall. By this stage I was starting to feel that Millwall had this game sewn up and with half-time approaching they were well in control, but if there is one thing I have admired about Rovers in the past couple of years it is that even when they aren't playing well, they can still grab a goal or two. And just before the break, it would be a wonder-strike from Chris "he's one of our own" Lines that would set the tie up nicely for the second 45. After Billy Bodin made an amazing run from the right-hand side deep into the Millwall box, he eventually flicked the ball back to a waiting Lines who applied his trademark well-placed effort into Jordan Archer's goal. Rovers 2-3 Millwall. To say that this half had been one of the best I'd seen this season would be an understatement and this great game was testament to both Millwall's attacking desire and also Rovers never say die attitude. The second-half was bound to be intense.

With Southend 1-0 up against Bury, a Rovers result of any kind would end Millwall's season and the Gas came out with all guns blazing after the whistle, meaning that anything could happen. With a great fanbase behind their side, DC's men played much better in the final 45 minutes and chance after chance came and went in front of the crumbling Millwall side. 75 minutes into the game and the 1,200 away fans must have been fearing the worst when Billy Boden stood over a free-kick in prime position. His 25-yard hit looped the wall very well and dipped enough to find its way into the goal for a highly-dramatic equaliser. Rovers 3-3 Millwall. The hosts had done it and despite being 3-1 up, Neil Harris's visiting side looked to have thrown a chance of promotion away to his former side Southend United.
Seemingly wanting more after bringing the game back, Clarke threw on subs Luke James and Ryan Broom hoping that one of his young forwards could break the deadlock and the Millwall hearts. Alas, James could not score his first Rovers goal on his last loanee performance and at the other end Jamaica international right-back Shaun Cummings rifled one at Lumley. The eventual winner came from another corner and as the gigantic Millwall players piled into the box another set-piece flew in- and this time it was Shaun Hutchinson who jumped in through two of his markers and headed home an 85th minute winner, which was met my delirious screams from the opposite corner of the ground. Rovers 3-4 Millwall. This seventh goal of a roller-coaster game would be the last in the match and it would be Millwall that secured a place in the play-offs, where they will now face Scunthorpe United in a tough two-legged test. The winners of that tie will take-on either Fleetwood Town or Bradford City at Wembley in a couple of weeks.

We left the ground and headed off to the Sportsman for a few beers, a pizza and a dose of the North London derby- apparently we'd not had enough by this point! As we walked down Gloucester Road, Tom asked me what I'd thought of the Mem and I had to tell him that I was impressed. Although the various mishmash of terracing and tents makes it seem like the owners had approached a catalogue full of different types of stadium stands and said to themselves "we'll have one of each", it was undeniably a ground of history, character and plenty of passion amongst the loudmouth fans. I won't be forgetting the Rovers' excellent home crowd so soon and our Bank Holiday Monday trip to the Everyone Active Stadium will undoubtedly be at the other end of the scale in terms of importance, quality and atmosphere- but that is the beauty of Groundhopping, I suppose.
Posted by Daz Knapton at 15:24