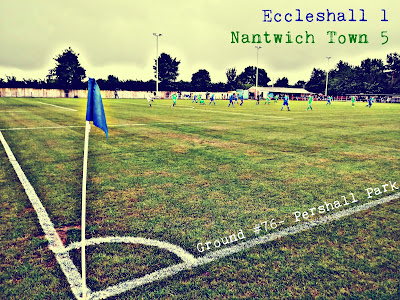 Hello folks and welcome to the magical world of the 2017/18 Season. I am delighted to be able to say that it is finally time for 'Pint of Football' to come out of hibernation and get back amongst the beautiful game. To start off my campaign, I decided to try once again to make it out to Pershall Park after having three efforts scuppered in the past couple of seasons. Back in March I'd had to reroute my Sat Nav whilst on my way down to Eccleshall following a flash flood, and my other two proposed trips were also called-off due to the weather- so surely my best bet would be to plan a visit in mid-July where the weather would be excellent? Wrong!

With strong sessions of rain baring down on Staffordshire all day long, I finished work by 6:30pm and sat pondering whether I would have to resort to full-length trousers for the 8-mile drive over to the home of the North West Counties League side as they welcomed a side who will be competing in a league three steps higher this season. The Evo-Stik Premier League Playoff Semi-Finalists from last season would surely start the evening as favourites and in what turned out to be one of the rare moments where I guessed a scoreline before the game, I went for a 1-5 win for the Dabbers. My trip started off in a fairly usual way, with me rushing down country roads towards a postcode that I'd plucked off the Google in a rushed walk to my car. Needless to say that when I "reached my destination" with just 10 minutes until kick-off, I could not believe that the view facing me was Pershall Park.

Several wrong turns later I passed by a dog walker on the side of the roadway and asked him for directions. He answered my request with an opening statement of "oh, crumbs- well this isn't it" before very graciously taking a moment to turn me towards my destination. I was directed into a football field with now only 5 minutes until kick-off and told to park up on what was the actual pitch of a junior football side's match. I kid you not, I was literally parked not 6 inches away from the corner flag! Alas, I had no time to worry about ruining these kids' fun and I dashed through the pitch towards the ground- and more importantly, the bar!

I endured the tedious queue at the Clubhouse bar for my can of Carling, in which every fan who ordered a pie had to wait whilst the solo server made the 10-mile trek over to the microwave to heat it up, before jogging out to the halfway line ready to see the lads get going- ahh, it's great to be back. With roughly 100 in attendance, I made it out just in time and saw the home side emerge in their blue strip ready to do battle with their opponents in green. Nantwich appeared to be readily anticipating this one and had been out on the field for a good length of time, meanwhile the Eagles soared out casually at 7:47pm for this 7:45pm match. Even the Ref seemed in a relaxed mood and had to rally the troops by saying, "guys, do you wanna come and do the handshake?" to which the players obliged. The first 10 minutes of the game were pretty much in favour of the hosts and already I had picked out numbers 10 and 8 as the string-pullers for Eccy. As a Groundhopper I always think that the best way to get off to a strong start in Pre-Season is by getting an early kick to allow you to blow off the cobwebs- so that's exactly what I did. As the ball bundled towards me I overheard one fan say to another "ooh, how's your touch?" and thankfully I was able to avoid potential disaster as I touch a firm touch before passing the ball back to the throw-in taker.
The displays of the 22 players on the pitch was decent, but not amazing, as you'd expect for an early Friendly match and the only difference for me in terms of the two sides was that Nantwich looked to be one pace quicker when reacting to the second ball situations. I did wonder whether the Dabbers were starting a strong line-up and as I heard murmurs around the ground, it seemed that they were giving a few youngsters and trialists a chance. Despite this though it wasn't a bore- and with 25 minutes gone we were treated to a zigzag of action starting off with a Nantwich corner. The Eagles keeper soared above the packed box and snatched the ball into his arms, before releasing the ball straight out to allow for an Eccy counter. This attack was decent and it saw the ball end up in the net courtesy of the number 9 poacher, however the lino put a halt to the celebrations by waving his spoil-sport flag. The following move from the Dabbers was good enough and after some great play by the Nantwich forward the ball was eventually hit out-wide to the left winger who punted the ball out of the keeper's reach and into the goal for the first time in the match. Eccleshall 0-1 Nantwich. The next 10 minutes passed by with a decent strike a piece on goal, both from free-kicks, before we would eventually see another first-half goal. The Eccleshall strikers linked-up well on the offence and when the number 9 struck the woodwork, his mate was there to follow-up and tap home a deserved equaliser. Eccleshall 1-1 Nantwich. There was to be no more goals in the first-half, apart from an offside Dabbers strike, and so before I knew it we were already on to half-time. I popped back into the Clubhouse, grabbed another beer and a pie just in time to sit down for 15 minutes and watch Holby City.

After the excitement of watching many a surgery I headed back out to the rainy pitch to find a Nantwich Town transplant of their starting eleven. I'm not sure if the whole team had been replaced, but weirdly enough the kits had! The Dabbers stepped out this time in yellow and they looked a completely different side in the second 45. Eccy had also rang a few changes and even decided to play two centre-backs wearing the number 4! This magic trick wasn't enough though, and before the hour mark the first of four second-half goals came. The new powerhouse up-top for the Dabbers soon found himself outdoing the young Eagles right-back and he set himself up for an easy finish. Eccleshall 1-2 Nantwich. Two minutes later and it was this time the left-back of Nantwich making the forward move and he looked keen to exploit a shaky second-half Eccleshall defence. As the blues failed to clear their lines, the ball was eventually lofted over to the number 3 who duly added goal number 3 by poking home another goal for the visitors. Eccleshall 1-3 Nantwich. The vastly superior away side had to wait a further 8 minutes before adding their next goal, even though they almost got it from other means. A 70th minute corner was well won amongst a plethora of Eccleshall defenders and Theo Stair's header went into the empty net ahead of the frantic home keeper. Eccleshall 1-4 Nantwich. The Eagles changed their keeper for the final 15 and despite making a couple of decent saves he was powerless to resist conceding one final goal. A good run from a Dabbers sub led to a bullet-strike from range which pinged into the net and sealed a second-half rout for the Cheshire side. Eccleshall 1-5 Nantwich. Without checking it out I can't be certain, but the side that played the Second-Half for the Dabbers were much better than that of the first and I would therefore state that the four-goal team would probably be there or thereabouts the first XI for the Evo-Stik Premier side. For Eccleshall, it'll now be an away trip to Uttoxeter at the weekend and Nantwich will continue to build on their preparations by facing Market Drayton Town. My next outing won't be until next week unfortunately and it'll probably end up being another Moss Rose visit- but be on the lookout and I'll be posting soon enough from another trip to one of the great teams nearby. Cheers to Eccleshall for providing me with my first ground of 2017/18 and good luck to both sides for the upcoming season!