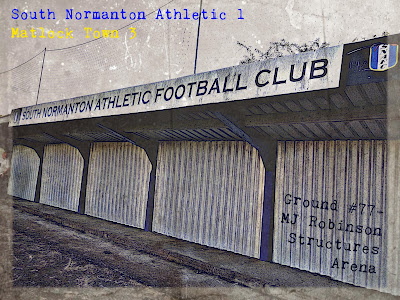 Day one of my Annual Leave from work got off to the perfect start this evening as I managed to hunt down some Monday night pre-season action over in Derbyshire. With a choice of three fairly obscure and somewhat distant grounds in my hand, I decided that the two hour trek to Maes Tegid to see Bala Town take on Chester was a step too far and I really didn't fancy tackling the M6 during rush hour to see Atherton Laburnum Rovers versus West Didsbury & Chorlton, so that left me with the mere 96 mile round-trip to Alfreton.

In a similar fashion to my first outing of 2017/18 last week, I was yet again looking forward to seeing a decent Evo-Stik Premier side and the visiting Gladiators would expect to gain a solid victory on this gorgeous Summer's eve against Midlands Premier League new boys South Normanton Athletic. Having made the 11 mile hop across the county, a strong squad including ex-Burton Albion hitman Shaun Harrad turned up at the MJ Robinson Structures Arena meaning business and from the offset it was clear to see that a fair sprinkling of fans had travelled too- which is always nice to see during pre-season. I may have arrived with a good 20 minutes to spare before kick-off, but I still wasn't early enough to grab hold of one of those rare luxury non-league ground parking spaces and so I made do with parking up on the road before heading inside. Upon entry, I was pleasantly surprised by the very reasonable £2 entry fee for tonight, especially having paid a fiver for the pleasure of seeing the Nantwich win at Eccleshall's Pershall Park the other day.

When I made my way through the turnstile and into the surrounding village of blue metal cabins, I looked around and sought out the Shiners Bar, tucked in between the Club Shop and the cleverly named Shiners Diner. After being fooled by the purely "for show" draught pumps in the bar, I ended up purchasing a can of Fosters from the nicely presented Clubhouse. With it being so hot still outside I found myself being one of just a couple of indoorsy types and so I decided to join the many and bask in the final rays of the day. I sat grasping my cold beer with my feet aloft, listening to the funky dance beats being thrown out by the speaker system and before I knew it, boom- game time!
The many Matlock shirted supporters soon scarpered away from the porch area and over to populate pitchside, whilst other folk stuck around near the bar and watched from the still decent view behind the goal. I decided to go for a mooch about as the match began, walking past The Shiners Stand and past a Family Stand adjacent to the corner flag- if you hadn't guessed by this point, the hosts like to call themselves the Shiners! The game had started fairly evenly, despite Matlock turfing out eight first team players, and the hosts seemed fairly comfortable in the opening ten minutes. Having won promotion from the East Midlands County League last season, albeit by default, South Normanton Athletic will this season be playing in the fifth-tier of the non-league pyramid and would be in the mood to gain early momentum following their 5-0 weekend win at Swanwick, but tonight's side from two divisions above would provide a whole new test. I had predicted a 4-1 victory for the visitors but based on my only other outing to see Matlock, a 0-0 draw at home to Ilkeston last season, I wouldn't have been surprised if they'd stole a 1-0. This was ruled out 24 minutes into the game though, as the hosts were awarded a penalty. Shane Newton stepped up and coolly put home the opening goal to give South Normanton the lead. Sth Normanton 1-0 Matlock.

The match had so far been lacking in chances, but it was by no means a bore. There was a very physical edge to the match tonight and apart from speedy winger Abou Sylla trying to mix it up with some great runs from the left, it was a pretty feisty affair. Ex-Scunthorpe United man Cleveland Taylor was doing his best to boss the midfield as Matlock got their way back into it, but it would be their big Summer signing Shaun Harrad, who still currently holds the record for most goals scored for Burton Albion in a Football League season, that looked likely to score. With 30 minutes on the clock, Harrad got a snapshot away and was only just denied by the post- but he was not finished yet. The Gladiators continued to press and was it not for the impressive defensive displays of Dom Allen and Mark Strzyzweski they would have been back in it much earlier. However, it was not until the 40th minute when Rose levelled up the game- as he latched on to a right-wing cross and hit a shot towards goal, which Strzyzweski almost kept out with a last-ditched effort to slide the ball away. Alas, this was to no avail. Sth Normanton 1-1 Matlock. This was not the last goal of the half though, as Matlock headed towards the Shiners goal again. Amongst a few more vicious tackles, of which one gained a yellow card which was openly questioned by one fan who asked "how can you book someone in a Friendly?", there was another ball poked into the box and this time Harrad pounced to give his side the half-time advantage. Sth Normanton 1-2 Matlock.
A few of the Matlock lads spent the break discussing happy away days and I overheard one lad laughing with his mates about the time they apparently drank Colwyn Bay dry. I had been speaking to my friend Will earlier today about our footballing ventures together and it got me thinking about what weird and wonderful places you get out and about to for the good of your team. Since I've started Groundhopping, Will and I have managed to check out some great pubs in places as far and wide as Watford, Nantwich, Stone and Leek all in the name of football. That list is set to be added to on Saturday as we go to watch our beloved Macc Town face Stockport County at Edgeley Park. In the meantime though, I supped a beer on my own and headed back out for the second-half.
There was to be just one more goal in the final half an hour of the match and it would come from Matlock's Trialist, Luke Thorogood, as he slid home a tidy finish that certainly won't harm his chances in the pursuit for a deal with the club. Sth Normanton 1-3 Matlock. Since arriving on to the field for the second-half, Kevin Hemagou had looked pretty good for the Shiners and the former Mansfield and Belper forward had a couple of half-chances to bring the home team back into it. With five minutes to go, another goal looked to have been scored after a goal-mouth scramble saw a Matlock defender head past his own keeper, only to be denied by a man on the line who seemed to boot the ball off the line and on to the crossbar. It seemed impossible for the ball to stay out, yet Scott Spering ordered play to continue and with that there would be no more goals. The full-time whistle sounded the end of this decent Friendly encounter and I headed back to Stoke with the sunset disappearing as I drove down the A38. As always, I'd like to wish both sides good luck for the upcoming season and I will no doubt see both of these sides again as I continue to travel around a lot of the grounds in the Evo-Stik and Midlands League divisions.