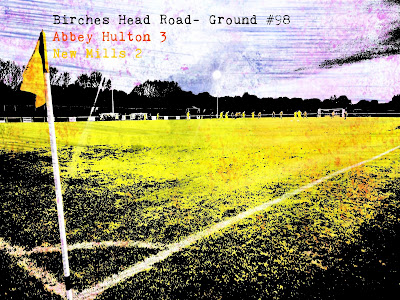 Day one of seven off from work meant that I had the whole world at my disposal and with a choice of matches lying at my feet in the end I decided to ditch ideas of a road-trip to Barrow to see Macc, in favour of keeping it cheap and cheerful for a trip to a very local ground in the form of Birches Head Road- my 98th ground and 23rd new venue of the season.

Today's opponents for Abbey Hulton United were appearing from the High Peak of Derbyshire and with a 30-mile journey on the cards today they would be looking to take three points off fellow newbies to the Hallmark Security First Division. Whereas United have joined the league after gaining promotion from the Staffs Senior League last season, unfortunately for New Mills they enter the division after a second relegation in a row and with the two sides sitting in 12th and 13th respectively before today's bout, both with 18 points, it would be interesting to see how this one would pan out. We mustn't forget that two seasons ago the sides were three divisions apart and it was of course the 2015-16 campaign where the Millers set an unwanted record after finishing the Evo-Stik Northern Division season with just 3 points from 42 games, including 0 wins!

With the sides sharing a points deadlock before the game, I decided to predict a 1-1 draw for this one and when arriving at Birches Head Road, just off the main canal route through potteries and also around the corner from my old dwelling in Sneyd Green, I was met by a muddy carpark and a couple of friendly locals- I'd expect nothing less in Stoke. There isn't much to say about the ground itself other than it is as basic as some of the other grounds I'd been to around the Staffs Senior League, but with a fair helping of fans and a full to the brim ramshackle clubhouse showing dodgy Russian streams of European matches on the TV, it was clear to see that the champs of the 2016-17 season were keen to build on last season's success. I quickly parted ways with a £2 coin and was given a can of beer to take out to pitch-side just in time for a rendition of the Last Post and a minute's silence which was almost perfectly observed for Remembrance Day, with the exception of the tune ending alongside the background noise of a hoover revving up. Following this the match got underway and just 90 seconds had passed when Abbey Hulton had their first chance after an accurate defensive clearance on to the left-wing was squared to the host's number 9. His early sighter bobbled wide on this occasion, but there were more chances to come for the hosts. In truth it was the visiting Derbyshire side that looked likely to score first and as I took stance in the modern 50-seater all black main stand by the halfway line, the Millers were on the ascendance. Despite no goals on this occasion, the New Mills travelling support seemed more eager for a goal than their opposition, with two fans sat in front of me seeming more worried about the logistics of their regional cup exploits. Despite all of this though, it would be the hosts who would soon be gleeful as an opening goal came about from another good cross-field ball on the counter. With 30 minutes on the clock the number 11, known only as Kieran to me, received the ball on the right-wing before cutting inside the New Mills defence and hitting home a left-footed strike into the net. Abbey Hulton 1-0 New Mills. As time progressed the back four of New Mills didn't as Dave Riley's side almost doubled their advantage just before half-time. It had certainly been the case that the home side had grown into the game after a good counter-attacking goal in the first 45.

With the referee's half-time whistle, the bar soon filled-up again as people tended to avoid the single-figure temperature conditions outside. Within moments of the break starting, I soon found myself joined by a good chunk of the home crowd who were pretending to be interested in the score of the Scunthorpe vs Bristol Rovers match that was being streamed rather than standing out in the cold. A can of Foster's later and it was time to head back out for a highly-charged second-half. New Mills started on the back-foot from the off, with the first chance falling again to Abbey Hulton- this time their keeper bailed them out with a full-stretch save to deny a header. An ambitious loft on the hour-mark from the opening-scorer went over the bar too as the 153 in attendance sensed another goal and as if that wasn't exciting enough for a neutral I was about to be witness to one of the game's rarities. In the 65th minute New Mills broke forward and in an act of desperation the Hulton goalie ran out and handled the ball outside of the area, seeing red for the liberty.
As one of the home side outfield players jumped in goal, the now depleted hosts now needed to act wisely, and what better way to do so than grab a second goal? As I reemerged with a beer from the clubhouse, I was just in time to see and hear United double their lead as their striker put in a decent finish in the 70th minute. Abbey Hulton 2-0 New Mills. It was now up to the visitors to react and they did just that 2 minutes later. After seeing his fellow number 9 just pop one into the goal, New Mills forward Nathan Neequaye grabbed his 10th of the season and in the process made the stand-in goalie seem frail as he showed quick reactions to tuck away ahead of the frantic orange defenders. Abbey Hulton 2-1 New Mills. The game had really turned on its charm by this point and after being denied his second just moments after New Mills scored, good old Kieran would soon be sliding on his knees as the hosts sealed the deal. At one end, New Mills thought they'd equalised as their number 8 nodded home, but after the offside flag was raised Abbey Hulton made a quick break again and this time the left-winger went clear of a tiring defence before comfortably finishing his side's third and final goal of the afternoon and perhaps the 3 points in the 84th minute. Abbey Hulton 3-1 New Mills.

The 90th minute approached and with it came yet another goal as New Mills flirted with the idea of stealing a point. With full-force attack and a temporary goalie at their disposal, it would be a left-wing cross that seemed to me to evade everyone including the opened armed keeper, making for a tense finish. Abbey Hulton 3-2 New Mills. The dream comeback could almost have been on too as the former level 8 side won a last minute corner that was dramatically headed wide by the New Mills keeper. With that the Ref decided that enough was enough and he brought the final curtain down on this match. After a poor first 45, the second-half was a true classic and a good advert for football at this level. My last visit to a game in the Hallmark Security League had been for a Premier Division encounter between fellow Stokies Hanley Town and Atherton Collieries, but even though this match was a tier lower in the pyramid it didn't make it any less of a goal-fest. Well done to both sides for an entertaining end to the game!
Posted by Daz Knapton at 14:12