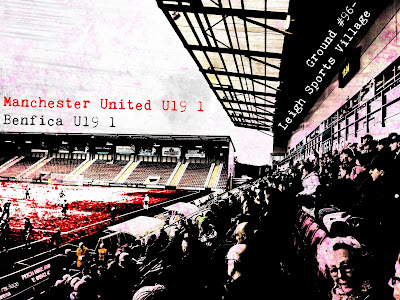 As I hone in on the end of 2017 with my 100th ground still in sight, today's trip up north for a mid-afternoon Youth League clash between Manchester United and Benfica would prove to be a great way for me to edge towards the century and tick off my 96th ground at Leigh Sports Village.

Attending a UEFA Youth League match has been something I've been interested in for a while and after seeing the likes of England Internationals Jesse Lingard and Marcus Rashford come through the Red Devils Academy in recent years, I was curious to see if the hype around players like Angel Gomes- who has played a senior game already for United- was warranted and so I headed on up the M6 to the 12,000 capacity stadium that plays home to the United Under-23's as well as Rugby League side Leigh Centurions. The hosts came into this European fixture at the top of their group, with 7 points from 3 games so far, and would face a Benfica junior side that took a point off the Manchester boys in the last round of matches in this competition. That game was 2-2, and that is what I'd predicted we would be treated to again as I arrived in plenty of time to observe the pre-match warm-ups.
Since 2010 the Águias (Eagles) have made a reported £270m from transfer fees received by clubs for their superstar youngsters, with Angel Di Maria, David Luiz, Renato Sanches, Bernardo Silva and current Manchester United midfield maestro Nemanja Matic all coming from within Benfica's academy and if that's not impressive enough, the Lisbon-based side have still managed to win the last four Portuguese Primeira Liga titles ahead of Sporting and Porto. Although United haven't lifted their domestic title since Fergie retired in 2013 and there was a grand total of only one United lad in the Under-17 World Cup winning England team that gained victory at the weekend, the Under-18 Premier League Table does see the Red Devils at the top and I was therefore understandably excited to see how this free entry football match would shape-up. After fighting my way past a few dozen fans eager to get a copy of the team sheet so they could pretend they knew all of the players in the starting XI, I approached the bar only to see the dreaded "NO ALCOHOL ON SALE TODAY" sign, before wiping the tears from my eyes and grabbing a bottle of Pepsi instead. I then made my merry way outside to be presented with the innards of Leigh Sports Village's ground. With red seating surrounding three sides of the ground and a standing terrace stacking above the goal to my left upon the other, I was very impressed with what is primarily a Rugby facility. There was a fair amount of scouts and press about, as you'd expect, and additionally was the usual friends and families of the players donning their proudest smiles as the sides came out for kick-off. There was also a nice fluttering of Benfica scarves and a decent amount of blokes in Manchester United merchandise too, as well as the few weirdos like myself who were here just as a one-off. In fairness though, I did wear my green Portugal top for the occasion and a Salford City scarf to at least look like part of the crowd.

Although I am not a Rugby fan, I was impressed with the ground and I had already been foretold by my good pal Will that it is a very decent facility and despite not being able to take a spot in the standing terrace with a beer, I still found myself in the company of 700 or so as the ball started rolling. In the first-half United kicked from right-to-left and started on the front foot. An early attack down the right-wing was swallowed-up fairly sharpish by the Benfica defence but their efforts to play the ball out from the back soon left them in hot water as Ethan Hamilton robbed the ball from his sleepy opponents just on the edge of the box before running in and tucking the ball into the net. Man U 1-0 Benfica. With the early goal coming for the English side, it meant that Benfica would have to force a way back in and their slow start thankfully didn't last. The visitors rode forward with the lion-share of possession in the United half and as the quarter-hour mark approached, the grey-kitted away side had a chance to equalise. In the 13th minute there was a great pass out to the right-wing where Paolo Medina Etienne, formally of the Real Madrid youth set-up, and the right-back made a darting run forward before putting a teasing ball into danger-zone. Joao Félix, who holds the record for being the youngest debutante for Benfica B, was the man targeted by Medina and from close-range he finished off the chance and levelled-up proceedings in the process. Man U 1-1 Benfica. The goals would prove to dry up after these early couple, but that didn't mean the action did. In a first-half full of skills, thrills and spills, as well as plenty of rolling around on the floor, I was most impressed with Hamilton for United as the box-to-box Midfielder got stuck-in to the opponents looking like a young Darren Fletcher. For Benfica it was their step-over savvy captain Joao Filipe that impressed, with the Portugal Under-19 international pulling the strings out on the right and giving Ethan Laird a tough task as United's left-back. Both sides were playing a 4-3-3 formation and although Benfica were becoming dominant, the match still seemed to be somewhat end-to-end as United often looked good with counter-attacks on both sides of the field. As the rain started to lash down on the game, Danish Referee for the day Mads-Kristoffer Kristoffersen was doing his bit to keep the players in check and he took down Hamilton's name in the book just before half-time, which led to another chance for Benfica. A shot from in the box was palmed away by Alex Foticek and so was the resulting corner, but the attack wasn't over and when Lisbon continued their probe on the goal and eventually hit the ball into the net- however, this time round the offside flag was raised and the final chance of the half was ruled out.

It was nice to see that at half-time there were a lot of United and Benfica fans having a chat and a laugh, getting pictures together and getting the banter started ahead of the senior fixture later that evening. Obviously a lot of these fans would be jumping straight on a bus to make the 16-mile ride to Old Trafford straight after this game and I must admit I was quite impressed with the arrangement of this match. If you've travelled over to Manchester on a rainy Tuesday from Lisbon, you may as well make the most of it and attend a UEFA Youth League match in the process and have a full day of footballing goodness. Not only is the standard very high, but the fact is that some of these lads will probably be eventually the stars of your first team and although I don't really agree with the way that teams qualify for the Youth League just because the senior side is in the Champions League, I do think it makes for a very useful arrangement as the youth side presumably get the valuable experience of travelling with the senior squad and get a feel for what they could be doing on a regular basis.

The second-half started with Benfica on top and Felix, scorer of the first, hit a wicked volley on the 53rd minute- thankfully for United they were able to block the effort from the opposition attacker. The Red Devils decided to bring Angel Gomes on and after captaining that massive win over Spain for the Under-17's on Saturday, we were all very excited to see if he could tip the scales in the favour of the home side. Despite not being directly involved, United did soon carve another chance and it was Nishan Burkart who hit an effort over the bar in the 56th minute. United seemed to settle back into the game for a brief period around the hour-mark and this time Gomes put in a ball to Hamilton who hit the target with a shot that Daneil Azevado gathered up in the Benfica goal. This short spell of attacking intent soon subsided however and Benfica would look to spend the remains of the game knocking on United's door. First off, Filipe ran down the right-wing and skinned a couple of defenders before hitting a delicate shot past the keeper and on to the post, and the tricky attacker would come into his own again as he set-up the next attack with a succulent cross-field pass out to Felix. With 10 minutes or so left, a lot of scarved fans started to depart for the big game, meanwhile the rest of us stuck around to see whether Benfica could grab a winner. Gomes showed flashes of greatness on the break, but ultimately the lad looked understandably tired still and struggled to make an impact in the final third. The full-time whistle blew after 5 minutes of injury-time that mainly saw Benfica lofting set-pieces into the United box- all which were defended well by Ro-Shaun Williams and his defensive unit.

My departure from the ground was swift and I was pretty pleased overall with what I'd seen on my afternoon in Manchester. The standard of football was very good and amongst Benfica's ranks I am sure that there will be a couple of future stars, which can't always be said about the matches I attend. My next fixture will be an FA Cup bout between Notts County and Bristol Rovers on Friday night for ground number 97, as I welcome Partizan Bristle back to the Midlands for a double-dose of footballing goodness which will culminate with a trip to one of my all-time favourite grounds- Sporting Khalsa's Aspray Arena!
Posted by Daz Knapton at 03:31