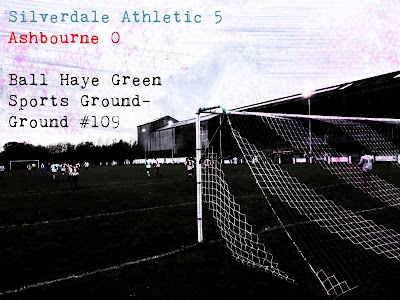 When a big weekend involving Partizan Bristle and Pint of Football comes around you can expect it to be a packed and exciting one full of new grounds, beers and at this time of the season, silverware too. The action for us began on the Friday evening as Tom battled against time to get up to Staffordshire to pick me up before racing to see the Leek Cup Final being held at Ball Haye Green's ground.
Arriving in the sleepy estate of Leek's north side, we parked up on Pump Lane and walked towards the ground whilst wondering if we'd gone back in time. Tom exclaimed that this is what he expected every village and town in the North to look like and the best way I could describe it is that it felt like we were on the set of Coronation Street. Either way, we soon made it to the turnstile and surrendered £3 a piece to enter a lively atmosphere for this regional cup final. The match was already underway and with Silverdale playing in a strip similar to Argentina's against the red kitted Ashbourne team, we soon took our stance and got invested in the game. My first thoughts of the ground, which has been the home of Ball Haye Green for many years and will sadly be closing its doors for good at the end of the season, was that the huge factory overlooking it certainly worked well as a feature piece and gave off the impression of a very working class club. I imagined the lads back in the 80's closing up for the weekend and then returning on a Saturday to represent the working man's eleven against other clubs from the surrounding towns and villages of Staffordshire, which is much better in my opinion than when you go to some of the modern grounds and just sit there knowing that you are probably only about the fifth person to sit in a particular seat in a newly polished generic stand. By the way, that's the sort of thing you can look forward to reading about in my entry from Sunday's friendly match at Sandbach.

The rest of the ground was pretty much in tune with the knackered feel of the towering grey building and with a group of kids having a kickabout behind the goal and plenty of locals to the side watching the action on the pitch there was a vibrancy to the evening and the two Staffs County League Premier sides were already giving them a show. Silverdale currently sit in 3rd and their opponents 10th, but having overcome the odds to get to the final Ashbourne would be hopeful of avoiding another drubbing like the 4-0 loss they'd had back in August in their league encounter. I'd predicted a 3-1 victory for Athletic and Tom, having zero knowledge of either side, went for a 2-1 Ashbourne win. Having missed a dozen or so minutes of the game we were thankful to at least see the opening goal of the night and it would be Silverdale's captain and number 5 who somehow headed home despite being possibly the smallest man on the entire field. Silverdale 1-0 Ashbourne. The Newcastle-Under-Lyme based side continued to progress and when their number 9 bicycle kicked another effort just wide from close range we got the feeling that it was going to be an easy win for Silverdale, which was emphasised further in the middle of the first-half as the left-winger doubled the lead from an almost identical corner to the first. Silverdale 2-0 Ashbourne. Half-time soon came and with that we searched for a pint at the hatch over by the corner of the ground. Unfortunately amongst the orders of oatcakes and pouring of tea for the masses, we were unable to spot beer on the menu and so instead decided to head back to Tom's car to retrieve my emergency stash of Foster's tinnies. We spent the majority of the rest of the break petting a cat called Bailey, which was a delight for us both.


Not much time had passed since the game recommenced and a nice pass towards a Silverdale forward was converted to put the game almost beyond doubt. Silverdale 3-0 Ashbourne. With the trophy looking to be slipping away, Ashbourne sealed their own fate just seconds after the third goal and a poor back pass to Carter in goal led to him stumbling and conceding a corner, which was put away with ease. Silverdale 4-0 Ashbourne. The match seemed to be all over now and as the hour mark passed a Ball Haye man waddled past us with a bucket of mugs, must have been getting ready for the post-match potwashing duties. Ashbourne did go close themselves and through their number 11 a shot was chipped over the keeper from 20-yards out and it bumped on to the post- unlucky. Some fans seemed to tire of the match in progress and one lady stood out in particular as she resorted to trying to spank the behind of the linesman as he ran up and down the line, meanwhile one overly passionate Silverdale man was screaming his lungs out with instructions and motivational messages to see his team into the final few minutes.

As we approached the end the referee, who I know from my matches watching Stone Dominoes, continued to maintain his reputation at this level of producing his own law on to the game and an Ashbourne player would see himself go into the book for attempting to block the opposing keeper's kick out of his hands, which was ludicrous at best. The final twist came in stoppage time as the rather chunky substitute striker was released through on goal- the number 12 made no mistake and he rounded off the game with the final action of the night. Silverdale 5-0 Ashbourne. John soon ended the game after this and with that brought the big cheer for Silverdale, champions of the 2017/18 Leek Cup.

We stuck around for a few minutes to see the lads collect the trophy before heading back to Stoke, with the first of our three matches already been and gone. Needless to say that the highlight of the weekend was still to come as we'd spend the following day at Moss Rose seeing my beloved Silkmen lifting the National League title, but nevertheless it had been a great starter for us and it certainly got us in the mood for the next couple of days. Silverdale, astonishingly, would go on to have another game at the weekend themselves and I'm glad to report that their 4-0 win over Florence on the Saturday afternoon would round off a pretty awesome couple of days for the Staffs side. Stay tuned tomorrow to read my report of the CONIFA exhibition match and a first visit to Sandbach United for Ellan Vannin versus Panjab. Cheers!
Posted by Daz Knapton at 13:46