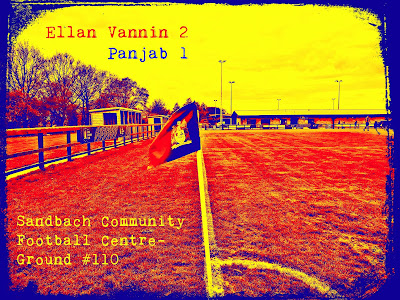 With just over a month to go until London hosts the 2018 CONIFA World Cup it was time for me to get back on the road with Partizan Bristle (Tom) and head on over to Sandbach for an international match between a couple of decent CONIFA sides that I'd already had the privilege of seeing before. This may have been my Bristolian chums first international outing for a CONIFA game, but I had seen Panjab lose out to England C in my final game of the 2016/17 season and then of course I was at my county's first ever match which was a solid draw between Yorkshire and Ellan Vannin, the team from the Isle of Man. I've recently thrown myself into the CONIFA cause myself and have got behind the World Cup by designing the wall chart for the tournament- which you can download from here.
Feeling fresher than we should deserve to be after consuming a couple of dozen pints between us so far at the weekend, we made the fairly short journey from Stoke into Cheshire for yet another new ground. Having spent the Friday evening watching the Leek Cup Final and the Saturday celebrating at Moss Rose for Macc's promotion party, today's affair was likely to be yet another different type of ground, level of match and overall experience. Arriving with 15 minutes to spare before kick-off, we felt pretty pleased to see the car park full to the brim and after finding a space just outside the main space, we mooched on over to the entrance only to realise that the vast amount of stationary vehicles were belonging to parents of players from various youth teams playing on the many pitches around the Sandbach Community Football Centre.

Although Panjab are ranked as the number one CONIFA side, I'd been very impressed from seeing Ellan Vannin at the start of this year and so I decided to forecast a 2-2 draw on this sunny but nippy Sunday afternoon- Tom predicted a 3-1 victory for Panjab. I'd already spotted the Ellan Vannin number 10 and pointed him out as my star man to Tom, a note made from seeing him come off the bench to terrorise Yorkshire's defence in the only game I'd seen him play. The St. George's Striker has a whopping 35 goals from 24 games in the Canada Life Premier League over on the Isle of Man. For Panjab I couldn't really pick anybody out as my memory of the game with England C didn't really allow me to recall any individuals, but the side who's geographical basis comes from the borders of Pakistan and India did come runner-up in the last World Cup in 2016 so I knew they'd have more than a couple of decent players in there. The two sides came out in time for the 2pm kick-off and with a quick trip to the modern-style club bar we were ready too.

Yes, it's true that Sandbach United's ground was perfect for hosting a game of the CONIFA brand and with a top quality facility for this level I couldn't help but feel this venue stood out as being a bit better than some of the grounds I'd seen in the North West Counties Divisions to date. I mean, it had less character than some of the acting that could be seen by all those people who chose to stay home and watch the Emmerdale omnibus instead of today's game, but as with some clubs who are lucky enough to build for the future, it should certainly stand the test of time as the side currently sitting 5th in the first division continue to pursue football in the higher tiers of non-league football. There was one newly installed stand of green and blue just offset from behind the goal and next to that stood two of B&Q's finest sheds for if the weather took a turn for the worse.

But we weren't just hear to tick off another generic modern football ground in one of the North West's suburban market towns, we were here for the footy. The gigantic Ellan Vannin lads took their physical advantage into the early knockings and despite picking up two early bookings in this "friendly" match, they looked to have sussed out the best answer to the silky smooth play of the pacey Panjab side. Both teams were going for it and as Panjab's number 10 hit a free-kick on target at one end, the Isle of Man number 9 hit a tame shot at his opposing keeper at the other. Just before the half-hour mark we were cheering the first goal and it came for Lee Gale just after the 21st minute as he was fortunate to be in the right place to collect the ball after a team-mate mishit a shot that he collected and then rifled home. Ellan Vannin 1-0 Panjab. The attendance of roughly 18 were then witness to Panjab's number 4 hitting the foot of the post just moments later and as Tom and I looked at each other we knew we'd picked a good game to round off our three day feast of football.

At half-time it was still 1-0 but in truth Ellan Vannin could have had a few more. The second-half continued to see the big side in a luscious red and yellow kit play well and despite a bit of a stop-start feel to the second 45, there was to be at least a couple more goals. Panjab rang the changes on the hour mark, seeming to replace half of the team as they tried to edge their way back in. I couldn't fault the blue kitted side for their efforts in trying to play the ball around and some of their football was very easy on the eye, but with often a lot tried to be done from the defence I do feel that their tempo was sometimes a bit too risky and subject to one or two catastrophic mistakes. Ellan Vannin continued to press for their second and after having a goal ruled out earlier, they would get it through Corinthians player Dan Simpson as the number 11 applied a composed finish to guide the ball past the reserve Panjab keeper. Ellan Vannin 2-0 Panjab. The final 15 minutes were perhaps the best played from Panjab and they certainly deserved a goal, with Ellan Vannin looking a little stretched at the death and eventually resorting to taking down another Panjabi player and adding another name to the yellow cards list.

At 7/2 odds, I don't think I'd be all that tempted to stick a tenner on them to win the CONIFA World Cup, but if their stoppage time goal was to go anything by then I can see why they are priced as one of the favourites. I've since watched this one a couple of times on the highlights reel and I must say that Panjab's number 7 struck his consolation volley very very well and you can't knock them for fighting to the death in this match. His goal brought the result to a close in the fourth minute of added time. Ellan Vannin 2-1 Panjab. With that we drove back to Stoke and then Tom headed back down to Bristol, where I will join him again tomorrow for another new ground. Until then, cheers and roll on the PROPER World Cup down in London. I'm going to be there for as much of it as poss and I can't wait to add many of the 12 new non-league grounds to my tally.
Posted by Daz Knapton at 15:11