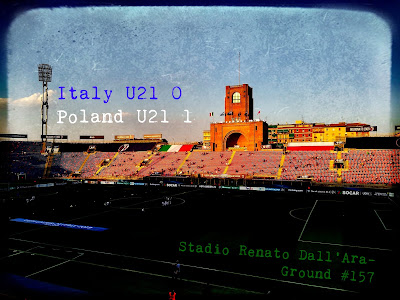 Here we go again for day three and it was finally time to visit Bologna to see if the hosts could build on a good start to their campaign by beating Poland. For me, today was the day that I was looking most forward to as I knew that this would be the least travelling I had to do. Just a mere 170km to travel from Ravenna to Bologna and finally to my Airbnb in Ferrara. Additionally, I was heading inland to the most legendary stadio of the tour in the shape of the iconic Renato Dall'Ara, which also happens to be in one of the most picturesque cities in Europe, Bologna. With a day of sun, sea and walking along Marina di Ravenna under my belt, it was time to jump back in my jeep and make the couple of hour ride west to a scorching Bologna.

I arrived unusually early in the city as it had looked on Google Maps to be a bit of a bun fight for trying to get parked up. I was right! Even at 5pm, four hours prior to the match, the traffic was pretty hellish and after driving around the backstreets of the ground I eventually got parked up somewhere that appeared to be free after 6pm. I was too lazy to translate the signage, but thankfully I didn't have too much to worry about as the local police arrived and started cordoning off the roads. I had hoped that this was just for the football and not some overnight roadworks- otherwise that would have been a lonely night kipping in the jeep. After a bit of a mooch around the gorgeous architectural sights, I popped in to San Gennaro to try out some of the local cuisine. Of course, Spag Bol is a product of Bologna and so the decision on what to eat was a pretty easy and delicious one. It was now 7pm and I made a slow walk around to the entrance for the stand I was sitting in, after having a cheeky street beer with the locals. The area was packed now and there were all sorts of people knocking about, including some sort of Italian celeb! I don't know who she was, but some lass was getting a lot of attention from fans (mainly men!) and she was constantly being harassed for selfies. I did debate getting involved myself, but I felt awkward seems as I didn't know who she was.

The match itself promised to be a good en, with Italy being favourites to continue their surge after beating Spain on the opening night, and with that I made a prediction of 2-0 to Italia. How wrong could I be? With almost 27,000 people in attendance, a spine-tingling rendition of the national anthem was sang by all (except me!) and before we knew it it was game time. Hotshot Fiorentina star Federico Chiesa and the gang got the ball rolling and we were underway. With the game starting in a fairly predictable fashion, with Italy in possession but not looking too threatening, I continued to find myself gazing around at the wonderful ground that I was sat inside. Lots of Italy and Poland flags were being waved, a well-maintained Mexican Wave was doing the rounds and as the sun set on the monumental Renato Dell'Ara I felt as much at home as I ever had at a game. As an England fan, I am aware that Bologna's stadium holds happy for memories for those who are old enough to remember the 1990 World Cup and David Platt's winner in the last 16 of the Belgium game. I have watched the footage of it and I could only dream of being alive and sitting where I sat in the ground for that historic moment.

Back to the game and with Italy going close through Chiesa and then missing a sitter in the form of Rolando Mandragora's scooping strike, the game still remained blank on the scoreline front. Into the last five minutes of the first-half and Poland had a rare chance to attack of their own- and unlike the wasteful Italians they showed a bit more grit to prod home the only goal of the game as Arsenal's Krystian Bielik nudged home after an initial free-kick was directed goalwards. The defensive midfielder, who has spent the past three seasons on loan at Charlton, Walsall and Birmingham respectively, wheeled away proudly knowing that he'd put his side ahead at the end of a half where the Polish had absorbed all of their opponent's attacks. Italy U21 0-1 Poland U21. The Italian fans were becoming pretty ravenous by this point and when an equaliser was ruled out just moments later you could feel the anger as the very unpopular referee blew his whistle for the break. Fifteen minutes to sit and watch the very vocal and passionate fan responses to that half... or to watch a live penalty shootout being played on FIFA on the big screen at the ground. At what point have we gone too far?

Amongst the nonsense of the FIFA, the three mile queue for the one beer hatch and the beauty of a now moonlit setting for the second-half, it was announced that Moise Kean of Juventus would enter the field. Finally, some excitement! The youngster was one of the names that I was looking forward to seeing at the tournament and having scored two goals for the senior side from three caps, as well as boasting an impressive record for Juve, the direct forward came on to a round of applause. Almost immediately after the restart, Roma's Lorenzo Pellegrini ballooned an acrobatic volley over from about 8-yards and all of a sudden we were back to being sat in our seats wondering if Gli Azzurri could hit the target! One fan even shouted out "mama mia!" as he slapped his head repeatedly, which was a personal highlight.

The game drew to a close and as Pellegrini rattled the bar with one of Italy's thirty-one strikes- only five on target- the decision was made for four minutes of additional time to take place. The whole stadium booed and began to evacuate and although I agree that today's ref was not up to the standard of Bologna born Pierluigi Collina, I have to be honest and say that forty-four minutes wouldn't have been enough for this lot to score! More boos followed at the full-time whistle as Poland claimed a delightful victory- always nice to upset the hosts I suppose. For me, it was time to complete my day's journey, or so I thought, as I headed to Ferrara expecting to go straight to bed upon arriving. Surprisingly, this was not the case, and I was instead commandeered as an attendee of a student street party in the city. Thanks again to Samantha and the Università Degli Studi di Ferrara gang for an unexpectedly fun night- and for the record, Italian students are the ultimate featherweights of drinking. Thankfully, this would mean a lack of hangover for the six hour drive to follow the next day, when taking the scenic route over to Trieste.
Posted by Daz Knapton at 03:25