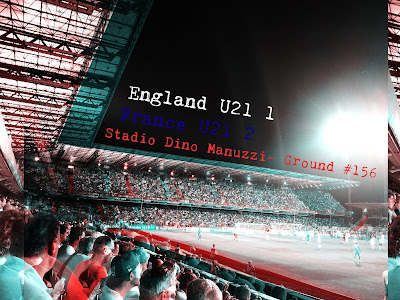 Day two of the trip would see me awake in the vineyard at Ponte Di Piave, ready to tackle a 200 kilometre trip down Italy's eastern coast all the way to Cesena for a big opening group match for the Young Lions. Having spent the most of the previous day travelling to Udine from Stafford for the Germany vs Denmark tie, I was very much looking forward to a day of relaxed travelling and at a leisurely pace that would allow me to sight-see. Yes, I'm talking beautiful beaches and knackered old non-league grounds! Two of the finest.

Whenever I drive any more than two hours to a game in England I feel so fed up of that "on the road" feeling, but with some of the stunning views on display the four hour trek flew by and with visits to FC Mesola of the seventh tier and AS Vaccolino who play in the backyard of a farm, I eventually ended up in Casal Borsetti for a quick rest and to admire the astonishingly peaceful village.
Once I rested up and plodded on to the X Hotel in Ravenna, my digs for the night, there was just enough time for a four-hour beach patrol before slinging on my Macc Town top, jumping back in Gianfranco the Jeep and bombing it down the E55 in search of Stadio Dino Manuzzi and the match between two of the pre-tournament favourites. The 20,000 capacity stadium is currently being used by A.S.D. Romagna Centro Cesena who have just won Serie D Group F, a regional equivalent of the National League here in England. Of course, the main club that people will know in the city are the recently defunct A.C. Cesena who had previously been a top-flight side in Serie A and even featured in the 1976-77 edition of the UEFA Cup. In recent times, AC Milan legend Massimo Ambrosini and former Juventus striker Vincenzo Iaquinta have worn the once famous Cesena strip and even Romanian wonder-striker turned badboy Adrian Mutu had a stint there in 2011-12. It all started to go wrong for I Cavallucci Marini, aka The Seahorses, when Italy lost out on their bid to host EURO 2016 and as a result major thirty million euros renovation works to the ground did not go ahead, leading to an eventual decline and bankruptcy of the club. A shame, but the newly formed phoenix side have started things up again from the fourth tier and as mentioned, they have made a good start by winning it first time around. They'll now rejoin the professional ranks and try to emulate what Parma Calcio have done by reaching Serie A again last season and managing a very respectable 14th place finish.

In the build-up to the tournament, I had been following England's progress without having a realistic intention of visiting the finals, but after seeing their qualifier against Ukraine in Sheffield last year, I was impressed with the high-quality football, low cost match and of course rare chance to visit some big grounds without having to suffer the rigmarole of watching a Football League match. I had also seen the Young Lions plough Bosnia at Walsall back in 2016 whilst qualifying for the previous EURO tournament, so to actually be out here in Italy was something really special for me. The then 19-year old Kevin Oghenetega Tamaraebi Bakumo-Abraham, or Tammy Abraham as we all love and know him as, scored a brace when I last saw him at The Bescot, so to see him on the bench really did clarify how strong our starting team were at this competition. With Man City's Phil Foden and Bournemouth forward Dom Solanke leading the line, the wings looked just as strong for having Leicester City starlet Demarai Gray on one side and Ryan Sessegnon on the other. I could go on, but ultimately it would not be the big names on paper that would win the tournament but the players who played the best football- something that these Young Lions would find out the hard way.

Due to the big crowd of fans and the fact that most of the 11,000 of us were arriving fairly late in the evening, it was touch and go for getting in on time and I think I eventually got myself tucked into my seat as the national anthems started. Of the four grounds visited this week, I'd say that the Dino Manuzzi is as close to a generic British ground as I'd seen. Four almost identical stands surrounded the pitch, with the classic corner standing floodlights poking their noses over. Don't get me wrong, it is a nice ground and for a third tier outfit it is in quality condition, but compared to the glory of the Stadio Friuli the night before and the two that would follow in Bologna and Trieste, it seemed a wee bit unspectacular. Not to worry though, the match would bring the stadium to life, right?

The English and French fans seemed to be fairly well equally represented from what I could hear, whilst the opening ten minutes of action provided a fairly good start for England. Sessegnon went close by hitting the post early on and Solanke missed a fairly well presented chance soon after, meaning that the fans in their Three Lions kits were starting to get a little overexcited. I think that at every single England game I've ever been to, I have seen a guy in the 2002 World Cup reversible red top- so to continue that tradition was a treat as I looked around and saw it to my left. France came into the game a bit more in the midway point of the half and they won a penalty for a dubious handball in the box. Lyon and former Celtic striker Moussa Dembélé stepped up and had it saved by Dean Henderson. The Sheffield United shot-stopper didn't have too much to do to make the save, but it still required a cool head and much like his fellow Northerner Jordan Pickford, he did his bit to keep the team level. Dembélé continued to look lively after this big miss, but was again thwarted just before the half-time whistle and the sides went in level-pegged at 0-0. A good game so far and either side looked capable of being able to grab the points.

At the start of the second-half Dembélé curled another big chance wide of Henderson's left-hand post and this one was arguably a bigger let off than the penalty chance- and so a sigh of relief was released by the England fans as we survived another scare. At the other end we found ourselves with a chance of our own as Foden found himself with space and time to run at the French defence. He weaved his way into the box, wriggled his way past a big centre-back and then simply slotted the ball home to give the Young Lions the lead. England U21 1-0 France U21. Looking to capitalise, England grabbed a quickfire second goal just minutes later, but it was ruled out for offside. The neutrals in the stand began to sing out from certain pockets of the ground which gave us a welcome rest from the big man at the front who kept belting out the "I just don't wanna go to work" tune, but in amongst all of this the last half an hour descended and with that came the big turning point in the game.

Having already conceded one penalty, England shot themselves in the foot again as Leicester City's very own Afroman, Hamza Choudhury, went in with a rash tackle on Dembélé and gave away another spot kick. The Ref initially gave a yellow card, but after the VAR footage surfaced it was rescinded and turned red- meaning the last twenty five were going to be very tough, whether Houssem Aouar scored from 12 yards or not. Thankfully for England, the kick from the Lyon midfielder rattled the goal frame and managed to stay out. Incredible scenes as another massive chance went begging for Les Bleus, but the question would be whether England could dig deep and keep a hold of the three points. In a change of tactic and an attempt to keep things fresh, Aidy Boothroyd brought Dominic Calvert-Lewin and Abraham on to presumably give us a chance to grab an unlikely second goal should a chance present itself on the break. It did not, and with the last ten minutes approaching, France were knock knock knocking on England's door. Henderson made a first-class save at full-stretch from one effort, whilst a few others were blasted wayward of his goal, but in the 89th minute the pressure would tell as Lille lad Jonathan Ikoné finally forced home a very late equaliser. England U21 1-1 France U21. Most of us will recall the iconic Zidane stoppage-time double of EURO 2004 that broke England hearts and for the few thousand of us here in Cesena this would be a repeat as France pushed for a dramatic winner. Aaron Wan-Bissaka, who is currently being linked with a move to Man United, was the unfortunate one to claim the winner in the form of a 96th minute own-goal as he tried to block the rolling ball going in. The French were hysterical, the English were gutted. England U21 1-2 France U21. At the time of writing England have now already been dumped out of the tournament and although this defeat was the start of a very bad competition for one of the world's most reputable Under 21 sides, I felt that the lads fought to the end in this game against another very good side and were it not for Choudhury losing his head for that one split moment, it may well have been a different story. Ahh well, I suppose we'll never know. Anyway, that was it for day two and as I drove back to Ravenna I knew that arguably the most exciting day was to come- a trip to the legendary Renato Dall'Ara Stadium in Bologna and with that a chance to see the hosts take on Poland!
Posted by Daz Knapton at 05:01