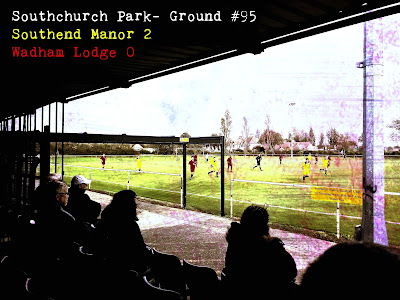 Just five games now stand beside me and the magic 100, meaning that with the end of the year coming up pretty swiftly I have only just a few limited free weekends from work. This was one of my chances to get on down to a ground whilst visiting family in Southend and after going bonkers on Thursday night at a Dizzee Rascal gig, it was time to take on calmer event in the form of an Essex Senior League match at Southchurch Park. Disclaimer- I would have opted to go to Leyton Orient to see Macc give them a rinsing were it not for post-match commitments involving Tandoori cuisine in Leigh-on-Sea.

I arrived at Southend Manor's seaside ground just moments before kick-off and with a kindly lift from my girlfriend's mum I could allow myself to be let loose with a beer or three. Unlike my form at recently attended games, Wadham Lodge came into this one having seen very few wins this season and therefore were sitting at the foot of the Essex Senior League as they travelled to mid-table Manor. Despite winning on Wednesday against fellow-strugglers Hullbridge, who had provided me with a great night out last season, only two wins had come from fourteen league games so far and with the host side of the day so far winning 50% of their ESL matches, I'd predicted a 3-1 victory for Manor on this occasion. Southend Manor FC, formed in the 1950's, had first caught my attention back in the season of 2011-12 when they managed to break down the barriers of their division to progress all the way to the Fourth Qualifying Round of the FA Cup, where they bravely fought and lost to a then very good Conference side in Kettering Town. Playing six matches to make it that far, this was the best effort of a side from Essex's highest regional division to make it to that stage since 1993. The side have failed to capitalise on that successful campaign in which they also finished runners-up in the league and have since sat in the lower regions of the league, with the exception of a couple of 7th place campaigns. Wadham Lodge, on the other hand, had graced my presence before as I took a ride over to their ground to see them lose out to Waltham Forest on penalties in the Gordon Brasted Trophy Quarter-Final.

The horrendously windy climate for the afternoon would be bound to have an impact on today's proceedings and as soon as I sat in the black and white seated main stand I was faced with my first weather-based issue of the day. Although Southend United had a home game down at Roots Hall, I would bet a few quid that there was more noise being made here in the metal stand that I'd temporarily housed myself in. No, it was not the couple of dozen fans chanting aloud that made this noise, but rather the gales reigning through the right-hand side of the corrugated seating area that forced the plastic wind-shields to rattle to the sound of one of those gigantic drills used to dig through the roads and generally destroy your earlobes. Aside from this, there wasn't too much to report on the ground- there is a playground just behind the goal that Manor's goalkeeper stood in from the off, with the other goal being pretty bare in terms of background. The sideline where the brickwork subs benches stood had no seating or covered standing areas and backed onto a road, leaving just the opposite side where I sat inside a fairly decent and basic main stand, which also had a covered standing area adjacent to it. One slightly odd feature to Southchurch on this occasion was that half of the seating area was closed behind a large cage, which is presumably just a sensible method the Manor lads have adopted to prevent the whole area being damaged over time.
The match kicked-off just as I emerged from the bar with a pint, meaning that it must be 3pm and game time. From the first couple of minutes we seemed likely to witness a Southend-dominated performance and it was Fatt out on the right who got showed the first bit of attacking initiative. On this occasion the winger offered a poor cutback and the defence easily regained possession for the Wad Army. The wind was impacting on some of the early play too and a few potential chances picked up unwanted height on their way away from the intended target, meanwhile the fan to my right offered his concerns as he stated "I think we're about to take off in a minute". The same chap also turned to me to advise me that the man who was loudly commentating the highlights to himself was actually recording for a radio station of some sort, before interrupting him momentarily to mock his bright orange sunglasses. "Did you get those down the seafront?" joked the Essex banter-maestro.

Now into the 8th minute and Brown found himself alone in the box with the ball at his feet, but as he lined-up a shot the visiting defence and keeper remained alert and the Wadham number 1 held the ball easily. A few minuted later Cleaver was released for his first of two quickfire chances- with the first being lobbed over the frantic goalie but wide of the goal, and the second hitting the body of the Lodge stopper from very close range. It is fair to say that so far the Manor number 3, who appeared to be spending a fair bit of time on the right-wing, had stood out for me so far and it was Lindfield's crossing and passing range that seemed to be creating the chances for the dominant hosts. No goals were to come in the first-half though, as Manor hit the bar from a corner and saw a wind-assisted free-kick from the halfway line almost land in the goal too. The lone-striker up top for Wadham did look bright and when he went down injured on the half-hour mark I feared this would be a crucial blow for their chances. Thankfully the tall forward got back on his feet after a meaty but fair challenge and he remained in the match, albeit in a limited capacity. Just before half-time Manor went close again, with Cleaver showing a lack of heading ability on this occasion and club captain Delf also had a dig as his scissor-kick lofted over the goal-frame.

The break was spent admiring the facilities and memorabilia in the clubhouse and whilst scouting around I came across some very interesting sights. After spotting that the club are apparently twinned with Charleville AFC of County Cork and also Munster Senior League side Mallow United, I then continued my quickfire tour and found the Manor's trophy cabinet. Having won various Southend District titles, the Essex Senior League and Trophy as well as the Harry Fisher Memorial Trophy, I also learnt of a monumental day in the history of the club that I didn't even know about- the summer in which Southend Manor won THE WORLD CUP!

After spending the remains of half-time with Mr. Orange Glasses trying to guess whether by scarf was a QPR, Chelsea or Southend one (it was Macc Town, by the way), I then got chatting with a couple of lifelong fans, ex-players and former board members of Great Wakering Rovers- another Southend-based side who now play at this level. These old legends had already been up to Holland-on-Sea last night to see their side beat Holland FC in the FA Vase, so today's trip to local ground Southchurch Park was a nice continuation of an already successful weekend. Having spoke with these gents for a while, I then realised that I had missed a good few minutes of the game, so I quickly topped up my plastic pint pot and headed out for the action again. As I arrived at pitch-side with the game still in deadlock, I was just in time to see Cleaver this time hit the target and as the ball landed in the net it was only for the lino to ruin his fun, as he held out the offside flag to deny the opener. At the other end, Wadham were actually working their way into the match and if it weren't for our old friend Storm Brian they may well have made more of a couple of free-kicks.
The 70th minute would prove to be the significant moment in the match as it provided the eventual opener we'd been yearning for. Bayley Newell tapped home the goal after some great work from the main attacking force Cleaver. Manor 1-0 Wadham. Just four minutes later and the visiting side found themselves picking the ball out of the net again as a now depleted Lodge XI failed to recover from the morale-crushing opener. Yet again it was Cleaver who sliced through the Wadham defence and just as four minutes prior he sought out his pal Newell and he was more than happy to double his tally. Manor 2-0 Wadham. With the game now wrapped up and the sound of an ice-cream van riding on the outskirts of the ground, all was well in Southend and as their League One side scored a late winner against Bury over the other side of town, Manor just about saw out a late surge from Wadham Lodge. A couple of impressive subs for the red-shirted visitors couldn't quite cut the deficit in half and the Ref soon blew to end the match with three points going to Southend Manor. Knowing that I had to catch a train to Leigh, I quickly departed the ground with a sturdy smile as I walked away from yet another outing to see the beautiful game.
Posted by Daz Knapton at 07:41