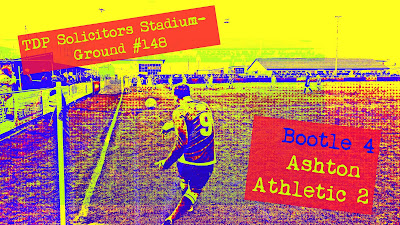 A big weekend for Pint of Football arrived and passed by as Saturday 9th March would come to be known as the day that I visited three North West Counties grounds to get me up to 150. The great coincidence of this groundhopping landmark is that it came on a GroundhopUK weekend in which a group of thirsty enthusiasts from around the country head over to a chosen area and hop around as many matches as possible. I myself have attended one of these events back in 2017 as I took in seven Western League grounds in a hectic weekend with Bristol based hopper Tom (Partizan Bristle), but since then I have also made an effort to support the event as I drove through to Holbrook St.Michael's for a one-off match within their 2018 Midlands endeavours. Being a committee member of a NWCFL side, I already had plans to go and see my Stone Dominoes side away at Wythenshawe Town so it seemed only right that I sandwich the 3pm fixture in between the early fixture at Bootle and the late nighter at St Helens. It wasn't quite the four match haul the GroundhopUK lads were embarking on, but it was certainly a fair slog!

Due to unfortunate circumstances at work, I began my day with a 6am shift in Stafford and as soon as I was physically able to I began my trawl up the gusty M6 in search of the 11am kickoff at Bootle. This Merseyside docking town would be the second I'd visited in as many weeks, with Cammell Laird being my away day with the Dominoes just seven days earlier. The main difference this time around would be that the match was a Premier Division fixture and with that I'd hopefully get to see the quality that has led the hosts to second in the league, whilst their opponents lingered in sixth- a massive nineteen points off the Bucks before this game. Knowing that the hosts would be well up for this high attendance crunch match, I predicted a comprehensive win for Bootle and set my stall out with a 4-1 triumph.

To put things into perspective, the crowd attracted by the early kickoff for this opening GroundhopUK tie of the day would be recorded at 391- the third highest non-league step five crowd in the country. As I arrived through the TDP Solicitors Stadium doors I was delighted to see the place in good form with a great mix of groundhoppers, locals and kids all wrapped around the outskirts of the pitch. Despite the early start time, the beers were flowing nicely and after taking on a sausage butty I joined in the social atmosphere by heading into the clubhouse for a pint of my own. Overall, the ground was impressive and had plenty of places to stand to have a decent view, the wind was blowing around the open stadium and on the pitch of course was the main attraction. The hosts had made a solid start and it would be their pint-sized captain and leading forward who made the first breakthrough with what looked like a well-placed nutmeg through the Ashton keeper's legs. Bootle 1-0 Ashton. That goal from Peers set Bootle on their way to more early dominance and the club's top scorer was soon doubling his tally with a strike from just outside the box lofting into the net. Bootle 2-0 Ashton. You'd be forgiven by this point for thinking the game was going to become a classic, because that's exactly what would happen. No sooner had Bootle ran into a two goal lead and it would be Ashton's turn to turn on the heat. They'd already had chances of their own but when they got the chance to break in the 23rd minute they made the most of their swift counter and of course that meant it was game back on. Bootle 2-1 Ashton.

There were to be no more goals in the opening 45 and so I began to do my usual walk around of the ground. The highlights for me were the hustling and bustling Dodge Kop Stand, the wonderfully popular Bootle bobble hats (pictured above) and the obvious split of red and blue fans in attendance within the local contingent. Yes, being in the heart of Merseyside is always great for listening out for banter and on this occasion there were some great laughs to be had with one youngster, fully dressed in Liverpool attire, as the other Bucks fans kept stealing his red teddy bear and pretending to throw it over the fence. He responded with some anti-Toffees slurs and before we knew it, that was half-time.

After spending the break in the spacious and modern clubhouse looking through the collection of badges that "Terry's Badges" had brought to town, I made my way back out to the pitch ready for another great half of football. In what was undoubtedly game of the day for me, I was also able to witness the best of the fourteen goals I'd see as Athletic grabbed themselves an equaliser. The move was simple but effective as a quick free-kick was tapped over to Charlie Munro. The midfielder had time to look up, gather his thoughts and then launch a precise left-footed drive into the net from 25-yards. A great goal, albeit a disappointing one to concede from the hosts point of view. Bootle 2-2 Ashton. The comeback from two goals down was very impressive and all of a sudden Bootle looked shaken up to the point of looking likely to surrender the match. Ashton continued to press forward as we approached the hour mark and all the home side could do is try to ride the waves out until they could make their own chance again.

To the full credit of the Bucks, they did survive the pressure of Athletic and with the final twenty minutes to play they were now back in full control of the game. Eventually the decisive moment of the game would come as Ryan Cox crept into the box at the right time to gather up a parried save by Martin Pearson before reacting quickest to walk the ball into the net. Bootle 3-2 Ashton. The celebrations said it all as the Bootle kop end ran to the fence to celebrate with Cox, knowing the a win would keep them within touching distance of table-topping City of Liverpool. Once play restarted the fans began to shout a round of the "Heartbeat" theme tune which is obviously the sign of a delighted bunch of supporters. Most of the groundhop brigade had already started to crowd towards the exit ready for their trip over to the next game and I also knew that I needed to make a swift escape as I had a drive over to Wythenshawe in Greater Manchester, but thankfully none of us left prematurely and as a result we were treated to the game's final goal. Ashton's efforts to search for another equaliser were foiled as Ste Jones caught them out on the break and ploughed home their fourth goal. Bootle 4-2 Ashton.

A great way to start the day and a well-deserved victory meant that this potential banana skin of a fixture was done and dusted for Bootle. As I left amongst the GroundhopUK gang I overheard a lot of positive feedback about the game itself, the ground and of course one man asked his mate the ultimate question- "can the rest of the day live up to this?" I suppose the only way to find out is to tune in for my next entry, which comes from the fourth and final match of the day at St Helens. In the meantime, the hoppers had two mid-afternoon matches to get to and I myself would be on official duty at Wythenshawe Town- my 149th ground and the last one I was yet to see in the South Division of the North West Counties Division.