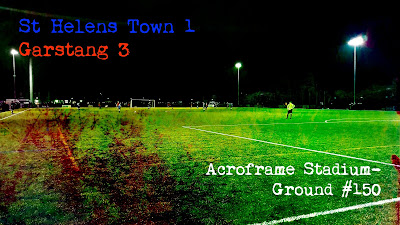 Wayhay, it's time for another landmark entry for 'Pint of Football' and this one is the big 150! Yes that's right, as time has gone by and the years have passed since my first ground visit to the Moss Rose in Macclesfield, I have proceeded to travel about in a journey that has seen be take in matches as far and wide as Mallorca and Belfast and as close and near as the local teams in Stoke and Staffordshire. With adventures in London, Bristol, Scotland and East Yorkshire, it became my destiny last weekend to end up in the North West of the country for St Helens Town versus Garstang, aka my 150th ground.

Due to the fact that I'd already attended two games on this blistery and wet Saturday, my early arrival was a great excuse for me to grab a much needed pre-match nap. I know, I know, old man, young body. In fairness, with a 6am shift earlier that day and one more to come the following Sunday, this three game haul was a real stretch for me and after starting the morning in Stoke, going to work in Stafford, driving up to Bootle, then across to Wythenshawe, before heading over to St Helens, I was more than ready for kip by the time the 7:45pm kickoff rolled around. Some would even have settled on the back-to-back matches I'd done already, with Bootle versus Ashton Athletic proving to be a proper cracker of a game in the 11am start, alas that's not the 'Pint of Football' way and knowing that the GroundhopUK gang had managed one more match than me already today I soldiered on into the green fenced new build known as the Acroframe Stadium.

Unlike the grounds visited on my 50th and 100th outings, the Acroframe was in near-perfect nick and with an astroturf pitch it is clear to see that the club have worked well with their local council to secure a sustainable and economical ground. Are they my favourite type? No, but I can't help but sympathise with a club when they go forward with a basic and modern facility in these times of struggle for non-league clubs. Compared to the Barton Stadium in Winsford, the home of my 50th, the differences are monumental and from a club's point of view I'd say it is for the better. Sure, the smell of chip fat, bobbling pitch and broken seats at Winsford United are more my scene, but this enclosed football pitch does exactly what it needs to and with a healthy ground share arrangement with Pilkington FC of the Cheshire League, you can't knock St Helens. With that said, I made my way into the stadium about twenty minutes before game time and it was at this point I realised the biggest mistake of my pre-match snooze. With the starving footy fans piling into the ground, I overheard one chap at the back of a mega queue tell his mate that the pies had already sold out. Meat and Potato, gone. Steak and Ale, nope. Even a Cheese and Onion was out of the question as I sulked past the van and into the stand. Thankfully, I was able to have a natter with the club Chairman who I know through Stone Dominoes and he very kindly offered me a cuppa and a chat as the game began. Garstang, a small town just North of Preston, were tonight's opposition and the midtable side were fancied by most to grab a win in the build-up. One groundhopper went as far as to say that he felt this was the only "nailed on" result when he'd looked at the stats beforehand. I preferred to be an optimist for the hosts in my pre-match prediction, selecting a 1-1 draw. However the newly promoted side, winners of the 2017-18 West Lancs Premier, were soon putting doubt in my mind as they took an early lead through Rich Coar as the forward got in ahead of the St Helens keeper to poach the ball into the net and put the side in red ahead. St Helens 0-1 Garstang. Much like my first match of the day both sides had a host of opportunities and I found myself almost gobsmacked when three huge chances went begging for St Helens. Liam Diggle's was the worst one as he rifled over the bar from close-range. Half-time was soon upon us and the near 300 fans in attendance rushed back over to the van for a top up of tea on this now very cold night.

The home side got things back underway in style within a few minutes of the restart as Diggle made the most of a scrappy set-piece to force the ball over the line and give the home fans something to cheer about. St Helens 1-1 Garstang. To be honest it was well deserved for the boys in blue and the romantic in me wanted to see them push on. The football on the whole had been scrappy in this one and with the cards being dished out for an unlimited amount of second-half fouls, it would take moments of magic or disaster to settle this one. Shaun Sailor, the best player on the pitch in my opinion, was the one to take the game by the scruff of the neck and his goal on the hour mark ensured we'd be in for a tense last thirty. St Helens 1-2 Garstang. The visitors would ultimately look more likely of getting a third than the hosts of an equaliser and despite a fantastic double save from Carl Williams, a penalty was eventually conceded from the defence and that allowed Jonathon Hothersall to claim the points for his side. St Helens 1-3 Garstang. The final ten minutes could've seen the scoreline become more devastating but with Williams producing a smashing goalkeeping display it remained as it was. I can honestly say I haven't seen shot stopping like that since Cribbs 2016.


The match ended and the hoppers filed back into the bus, but for me it was time to get back on the road and head for home. A tiring but rewarding day all round.
Posted by Daz Knapton at 12:33