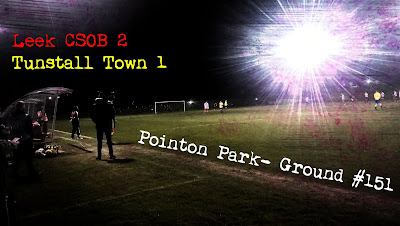 Imagine being nine points off the top of the table with three games in hand. Now, imagine that top of the table have already played all of their matches and the ball is now in your court as the second placed team. Great, right? Finally, imagine all of the aforementioned is true but your goal difference is massively inferior. That's the kick in the teeth you need if you are following Leek CSOB this season. Yes, the Old Boys were in a position in which only a win would do, but ideally it needed to be a ten goal win and with a match against fourth place Tunstall Town coming up it was always going to be a big ask. Before yesterday evening's clash, CSOB had already managed 98 goals from 25 matches but unfortunately for the Pointon Park based side that was still a whopping 27 behind Silverdale Athletic and therefore meant that it is almost a dead cert that the Newcastle-under-Lyme side will eventually be crowned champions. Still, the hosts couldn't be blamed for dreaming and after a 6-0 victory over Ashbourne FC and a 23-0 win against whipping boys Florence FC, the very least the Old Boys would be asking is for three final wins to leave them level on points in a very respectable finish. Having lost only twice in the league this season, both against Silverdale Athletic, the only real setback that the club had encountered in the 2018/19 campaign was last Wednesday night in the Challenge Cup Final in which Stafford Town came back from two goals down to pip them to the Cup at Hanley Town.

Seems as how I am moving out of Stoke and into Stafford soon, I wanted to get over to Pointon Park before leaving as I knew it was a ground worthy of visiting, but equally not one worth travelling more than the 17 minutes from my current house in Dresden. I have been lucky enough to visit a good number of the Staffs County League grounds already through my travels with Stone Dominoes last season at this level, but it's still nice to visit them as a neutral too and with only this match or a trip to Keele Uni on the cards, there really was only one choice for me on this nippy night. Arriving at Pointon Park just as the Ref blew to get the ball rolling, I strolled in to the ground and did my best to first of all decipher which team was which. My calculated guess was correct and it was the hosts in red and white, whilst their Tunstall opponents wore a yellow and blue kit and they were in ascendance when I approached pitchside. Town's towering striker headed the first chance over following a long-throw that Rory Delap would've been chuffed with, whilst at the other end the Old Boys number 9 fluffed his lines with an easy chance that could've given the perfect start with just a few minutes on the clock. Soon enough the quarter-hour mark passed and with that Tunstall shot themselves in the foot by surrendering the ball from an over-forced attack which led to Michael Keates getting the ball, having an initial shot saved and then following up to slide the first goal home. Leek 1-0 Tunstall.

The twenty or so folk in attendance gave an optimistic cheer to suggest that with another half a dozen on the night, plus a couple of big wins against Foley Meir and Eastwood Hanley, the title was still a possibility. To be fair, the standard wasn't great in this match but it also wasn't a boring one and with Tunstall getting stuck in I was keen to see how things would pan out. We had to wait until almost the half-time whistle for the next big chance though and when the Tunstall left-back completely missed the ball and allowed Leek's number 11 in one-on-one, it was left up to the backtracking defender to make amends and get back to clear the eventual shot off the line as the visitors held on. During the break, the aforementioned number 3 for Tunstall, named Hussain, was subbed off in place of Sam Hati- a lad I'd seen a couple of times earlier in the season for the Dominoes. I was looking forward to seeing how the former Hanley Town player would get on in what was bound to be a tight second-half.

As the players reemerged for the restart, the neighbouring five-a-side pitch began to become vocal as the "Lads & Dads" match was obviously getting tasty. I'll be honest, I did almost get hit with the ball from the main pitch whilst glancing over. One man shouted "next goooooal winnnnnner", how could I resist?

The hosts started off with an early chance and I must admit that I was astounded to see the offside flag deny the Old Boys a second goal just three minutes in. Tim, who would become a prominent feature in the second-half, was a tall and slow lino who struggled to keep up with play at the best of times unfortunately and when the Tunstall defence was unlocked they raised an arm as the Leek striker ran in. Tim, practically still bumbling around at halfway, ran down his wing and raised the flag just as the ball was struck into the net. A few fans began to shout their thoughts out and this caused a reaction from the big man who was clearly struggling to remain focused. "You best shut up or the club will report you" proclaimed Tim. Imagine the lino shouting that out at a Premier League game to the fifteen thousand abusive fans giving him a roasting. Hilarious. Back on the pitch there was to be a goal and it was a similar move to the previously ruled out effort. Leek's pass through the middle was inch perfect for Keates and he ran on to it, rounded the keeper, took a look up behind him at the backtracking defenders before tapping it into net. Two down, only another eight to go! Leek 2-0 Tunstall.

The remainder of the match was very competitive, well fought and often scrappy, but the hosts did seem the more likely to score again. With five minutes to go CSOB squandered a good chance and just a minute later there would be a late twist to the tale as Flattley fired home after a classic goalmouth struggle. The scramble would see Tunstall shots ricocheting off of home defenders, the keeper, the woodwork before it was eventually forced home. Leek 2-1 Tunstall. I spent the remaining few minutes thinking about how much of a damp squib it must be for Silverdale Athletic to know that they are almost guaranteed the league, but also know that they won't get it through a result of their own. The title almost was sealed tonight as Tunstall went close to an equaliser in stoppage time, but ultimately the spoils would go to the hosts and the attentions now turn to Wednesday. The former FA Cup and FA Vase competitors next face off against third placed Foley Meir on Wednesday knowing that only a double figures win can realistically keep the fight alive.
Posted by Daz Knapton at 04:08