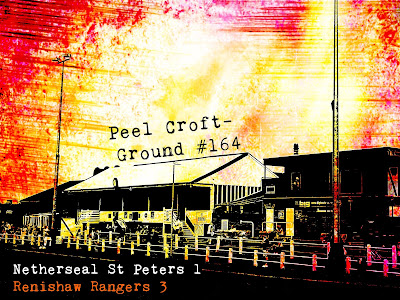 In a world full of hidden gems, a world full of non-league brilliance, a world full of strange grounds and matches to attend, Saturday's trip to Peel Croft in Burton to see a first football match there since 1910 will go down as the highlight of pre-season for me, as I'm sure it will for many others who made the trip to the East Midlands to see the Invitational Cup match between Netherseal St Peters and Renishaw Rangers. The midday kickoff was perfect for me as it was just a stone throw away from my 2:30pm match over in Shenstone that I was planning to attend. Don't you just love it when a plan comes together?


Not only would this one be a rare chance to attend an old school ground in a place that no longer holds football, but it was also a big opportunity to get down to this legendary field before it closes its doors to become a retail park. Boooo! Yes, since the 1870's when Burton Rugby Club were formed, the 5,500 capacity ground has housed the egg-ball team during two separate spells dating pre-1890 and post-1910, which were only broken up within the twenty years that Burton Swifts and Burton United had a go at running the place. Once the footy sides cleared out by 1910, RFC was back and has remained the only sport to be played there- until Saturday 3rd August 2019 rolled around. Two matches were lined-up for this sunny Saturday afternoon, with the Chairman's Cup being the latter fixture that I did not attend between Pinxton and Bakewell Town.

My midday match was being played by visiting sides from South and North Derbyshire, with St Peters nestled on the borders of Derbyshire, Leicestershire and Staffs in Swadlincote, whilst Rangers were as near as damn it to being over the Yorkshire border- which instantly made them my team to cheer on today and I predicted they'd grab the win by 4-3 today. It's not often I get my predictions correct, especially when I don't know too much about the sides on display, so I grabbed myself a pint and made my way pitchside ready for some football in the sun- this is what August outings should be like. The opening ten minutes were pretty eventful too, with both sides knocking in an early goal. Unfortunately, my toilet timing caught me out for the first time this season as I missed the first from Renishaw which gave the orange side the very early advantage. Netherseal 0-1 Renishaw. Thankfully I'd sorted myself out in time for the 8th minute leveller as the St Peters forward finished off a strong move down the right. Netherseal 1-1 Renishaw.

With the rest of the half being fairly tame, it gave me a chance to have a good walk around the ground and take in the stunning views on the sun soaked Peel Croft. The stadium, which is sadly to be destroyed soon enough, is a true piece of art and it was so good to see it hustling and bustling with fans of all walks. There was everything from a Pontefract Colls fan to a weird guy in a Huahin City shirt!
As well as having a stunning ground and a classic old-school clubhouse onsite, there was also a delicious canteen that served up all the good stuff from bangers to chip butties. Had I not been attending a BBQ later that day, I'd have almost certainly given the nosh a go too. I honestly couldn't find a fault with the rustic old ground, apart from it belonging to the wrong sport- and so when the second-half kicked-off I turned my attentions back on to the action on the pitch. Renishaw, of the 11th tier, were starting to dominate by this stage and on the hour mark their captain had a good strike denied by the St Peters keeper, followed by a corner that rattled the bar. In the end, it would be a strike of luck that gave the oranges their deserved goal with fifteen minutes to go, as a deflected goal bobbled in against the resilient but tiring defenders wearing black and white. Netherseal 1-2 Renishaw.

Renishaw were in their stride now and it took them just three minutes to grab another goal as their number 9 got a well deserved final goal with a good left-footed drive to ensure the invitational cup would be heading north. Netherseal 1-3 Renishaw. Into the last ten minutes we could've seen more goals were it not for the heat exhaustion the lads were clearly feeling by this point. The Ref, who's lino looked like she could be related to Bruno Mars, ended the game and queued my signal to rush off to the car and head down the A38 in search of more pre-season goodness. I didn't get to see the Rangers lads lift the trophy, but well done to all involved for a great afternoon of football at one of the finest semi-pro sports grounds I've seen. Well worth a visit and fair play to those rugby lot for keeping it in good nick!