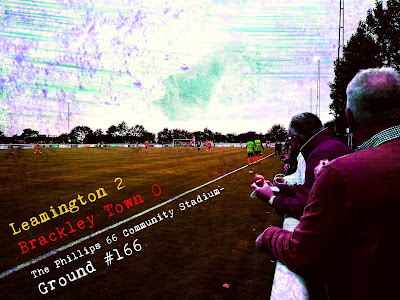 Finally, after eight pre-season outings varying from the highs of last weekend's outing to the gorgeously rustic Peel Croft for a historic Invitational Cup game to the lows of a drab draw on a rainy Friday night at The Hawthorns, it is time for 'Pint of Football' to get to a first competitive fixture and I would be getting things kicked-off in style by attending the New Windmill Ground- aka The Phillips 66 Community Stadium- for a National League North encounter between two of the league's most Southern sides. Yup, it certainly seemed weird to tell my old pal who lives in Scarborough that I was attending a National League NORTH match whilst two-thirds down the country. I won't get into the National League regional divide in this write-up though, don't want those boys in Weymouth having a go!


I was looking forward to the match as I anticipated a good bout between two clubs who are separated by just 25 miles on the M40. For me, it was well over 60 miles each way from my Stafford home, but as I finished work in Coventry at 7:15pm it was ideally placed to accommodate my need for a midweek match. My initial plan was to visit the Phillips 66 Community Stadium on Saturday for their match against Curzon Ashton, but I just could not wait. The evening's visitors from Northamptonshire arrived after an opening day victory over Alfreton on Saturday, meanwhile the hosts were looking for a first victory following a decent away point in a 2-2 draw at Aggborough- arguably my favourite National League North ground of the six I've visited so far. Actually, I don't know, Bootham Crescent was pretty spectacular.


A smart and modern clubhouse was my first sighting once inside the ground and more to my delight it was only the second ground at this level I've been to that allows you to take a pint out to pitch side in a plastic. East Thurrock United's Rookery Hill was my first, although they are back where they belong in the Isthmian League by this point. The rest of the ground was pretty standardised, amber seating in numerous small stands along one edge of the pitch, with a decent undercover standing zone behind one goal and a standing terrace behind the other. Usually I tend to find the modern new-style stands a bit boring and uninspiring to write about, but in all honesty this one felt a bit different because it had a good mix of tattyness and generic new builds. There was a shed selling old programmes, the behind goal terrace was littered with LFC flags and the ground looked pretty filled out to give for a decent pre-match ambience. They've done a good job considering this is only scheduled to house the Brakes for the next few seasons before they move closer in to town to a new stadium.


For many, Brackley would have been the pre-match favourites after their 1-0 opener on Saturday, mixed with the fact that they've finished 3rd in the past two seasons only to lose out in the playoffs to Spennymoor Town in 2018/19's semi-final and Harrogate Town's promotion final in 2017/18. This was only Leamington's third campaign since winning the 2016/17 Southern League Prem, but after a struggle in their first, the last season was much more convincing and saw them finish in a respectable 13th place- just four points outside of the top-half. Knowing that the hosts will want to progress and crack the top ten this season, I predicted them to put up a good fight against a well established side and grab a point in a 1-1 draw.


The hosts started the game strongly and, despite losing star striker Colby Bishop in the summer to Accrington Stanley, it was the Brakes who took the lead inside the opening twenty minutes. The home side made the most of a free-kick as the ball was floated in, nodded on by their big target man in the box and then finished off solidly with a second header coming from Jack Lane, the centre-back who began his career with my beloved Macc Town. Up the former Silkmen! Leamington 1-0 Brackley. The Saints, who also had an ex-Silkmen defender on the bench in the form of Thierry Audel, seemed to be unable to cope with the height from the Leamington set plays throughout and as the fans in the CEX stand began to chant out "ohhhhhhh Leamy Leamy, Leamy Leamy Leamy Leamy Leamington!" it would be interesting to see how the visitors could respond.
With the smell of cheese wafting around the ground, which was bad, but not as bad as the smell of sewage that you get at the Castle Vale Stadium (home to Romulus), the fans were in high spirits at both ends and Brackley's boys behind the goal started to get excited as their side tried to work their way back into controlling the game. A cross on the half-hour mark hit the bar and there was lots of play in the right part of the pitch, but still no equaliser. At the other end an effort from Jack Edwards was brushed wide after being redirected off of a Josh March header. That would've been an ideal way to end the half, but when Aaron Bannister blew the whistle it would be 1-0 at the break. I took shelter from the light drizzle in the clubhouse and before we knew if, the second 45 was underway.


The biggest and best chance for the visitors of getting a goal in the game came and went within the opening few minutes of the half as somehow a corner was kept out. First of all a shot from close-range rattled the bar, was flapped off the line by the keeper, then headed goalwards again by a Brackley attacker only to fall into the loving arms of Jack Weaver. The shot-stopper could not believe his luck when he peered down to see the ball in his grasp, but from the stands the home fans began to chant out the big question- "will you ever, will you ever, will you ever score a goal?"


When I watch matches at the higher end of non-league I always seem to fall into some sort of scout mode and end up focusing on a standout player. On this occasion, it was Connor Dudger at left-back who caught my eye with his pace, persistence and ability to sweep the defence where needed. Seeing that he's spent most of his career with local sides such as Tamworth, Hinckley United and Worcester City, I'd be interested to see if the 26-year old progresses into the National League at any point. One lad who has played at a higher level is wing-wizard Jordan Murphy, formally of League Two Walsall and more recently Solihull Moors, and the number 7 would eventually have the final say in the outcome of this evening's match as he received an excellent outside of the boot pass from midfield, controlled it well, turned the opposing left-back inside out with stepovers before placing a cool strike passed Danny Lewis in the Brackley goal to put the points in Leamington's pockets. Leamington 2-0 Brackley. The final goal came in the 71st minute and despite there being chances at both ends after that, the game would finish with a very impressive result for the Brakes. A good display all-round and, despite Mr Bannister's stop-start refereeing style, this match was another good advert for football at this level. Best of luck to both sides for their matches against Curzon Ashton and York respectively at the weekend. I'd be surprised to see either of these clubs in any sort of trouble this season.
Posted by Daz Knapton at 03:52