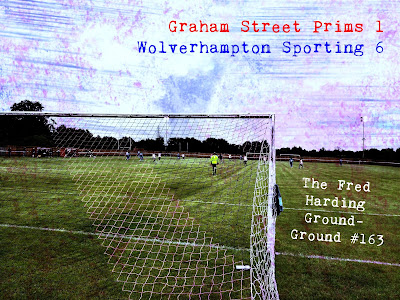 When the weather is atrocious and every club in the region are cancelling their matches, there's always one club that comes in to save the day- enter Graham Street Prims of Derby, the saviours of Tuesday night football. And as if that wasn't enough, I was even able to make the most of my last minute plans by enticing my old pal Bennett to come along to his first game in what he reckons was at least twenty years. In truth, he's not really a footy fan, so I wasn't sure how he'd feel about overseeing a match in a glorified field in the windy rain, although to be fair his preferred team are Port Vale so I doubt he would notice a difference in standards as we emerged at the Fred Harding Ground just moments before kickoff.


Having booked a week off from work to do a bit of gardening at home and of course some groundhopping, there was almost a guarantee that we'd get rain every day and with Tuesday bucketing it down in Stafford, a lot of my initial plans were washed away. With Sikh Hunters versus Sporting Khalsa being my original choice over in Great Wyrley, I began to look for alternatives as 6pm approached. The standout option would be Redditch United's Trico Stadium but with Google Maps telling me that the M6 was up it's usual tricks, I grabbed my keys and jumped in the car to head along the much better behaved A50. An hour passed and I'd made it to Borrowash, a village name that wouldn't sound out of place in the world of Lord of the Rings.

The two teams that would be facing off on this evening would be East Midlands Counties League side Graham Street Prims and their recently relegated former Midland Premier League opponents from Wolverhampton, Sporting. I goaded Bennett into making a pre-match prediction and we both agreed that the visitors would grab the victory- he went for a 5-2 prediction and I opted for 4-1. We weren't a million miles off and with just three minutes on the clock we found ourselves stood in the perfect place behind the Prims goals to see the Wolves number 6 strike an early one from range that nestled perfectly in the corner of the net. Prims 0-1 Sporting. With the Prims being on the back foot so early, despite playing a side who play in the same tier of non-league football, we made our way over to the halfway line to stand and watch the half whilst also doing our best to avoid the light drizzle that had ko'd most of the county's games. Twenty minutes passed and Sporting were able to double their lead after an attack down the right ended up with a couple of decent headers to set up the easy finish from a visiting striker. Prims 0-2 Sporting.

The Wolverhampton based side would continue to dominate the remains of the first-half and with left-back Moussa standing out with his darting runs we were treated to a third just before the break. Sporting's number 9 ran past the flatfooted back four of Graham Street and on the bounce he lofted the ball over the keeper, who was stranded after running out to try and win the ball. Prims 0-3 Sporting. We used half-time to drive into Borrowash village in search of a couple of cans for the second-half, being as the tea hut wasn't licensed and sometimes a mug of tea just doesn't hit the spot at the footy. Making it back into the Fred Harding just as the Ref restarted proceedings, we got back in place just in time to see the hosts have a rare chance that rattled the bar from six-yards out. It looked easier to score than miss, but still at least it showed encouragement for the couple of dozen fans in attendance.

Bearing in mind the last game I'd attended was a 0-0 bore draw between West Brom and Bournemouth and before that I had seen a great match in Telford between Wellington Amateurs and Eccleshall, so to be back at another non-league ground in which the goals were aplenty was a great feeling. Can't believe I even entertained the thought of seeing pro teams in pre-season, what a joke! On the hour mark Wolves Sporting grabbed their fourth goal and it came from the number 9 again, as he tucked away a goal on his final touch before being replaced with the game done and dusted. Prims 0-4 Sporting. The lad who'd come in for the last thirty was soon involved in the game and the substitute number 14 took advantage of a tired Derbyshire defence to finish off a break and make it 0-5. Prims 0-5 Sporting. Although my pre-match 1-4 prediction was off the table now, Bennett still had a chance if the hosts could notch two late goals- that was until a penalty was conceded in the last ten minutes and converted by the Sporting number 10. He'd been desperate for a goal all night. Prims 0-6 Sporting.

To keep things interested we both made a prediction on which team would score the final goal of the game and knowing that the pub was calling, we put the first round on the line. Much to my pal's delight, his persistent faith in the home side paid off as a stoppage-time volley was blasted home on the left as the number 11 ensured that the first drinks would be on me as we headed back to Chaddesden to start a night of darts, beer, pool, beer, music, beer and roulette. That's what Tuesdays are all about, right? Prims 1-6 Sporting.
Posted by Daz Knapton at 03:19