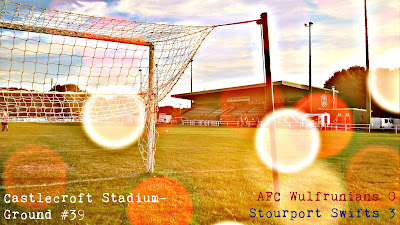 In the midst of the Premier League's much anticipated return, paired with Team GB's Olympic sweep over in Rio, it has been hard to keep the eyes off the TV screen over the past week or so. However, there's only so much of Usain Bolt's magic and Paddy McNair madness that one can take and it was time to get back out and watch a live game of non-league football.

Tonight's plan was simple. Finish work, drive to Wolverhampton and meet up with my pal Mikey to steal his non-league virginity in a hopefully-not-too-dreadful match taking in the joys of the Midland Football League. Having visited two outstanding grounds from this division last season in Brocton's Silkmore Lane and the truly delightful Aspray Arena, I did not expect to be met by yet another great little ground. Alas, I was, and with a very early arrival I found myself practically knocking on the door to get into the Castlecroft Stadium. Initial points of note at the ground were firstly that it was in a posh area surrounded by luxury housing, second that the stadium's stand had the England Rugby badge on the side, and finally that I was arriving at the same time as the players. In an attempt to find out more about where I was and what it was, I got talking to the chap who would eventually sell me my ticket, and he was explaining briefly that the ground was used by England Rugby in the early 2000's and when AFC Wulfrunians were formed in 2005 they moved in following the Rugby folk to the more appropriate home of Twickenham. This would explain the posh nature of the area and the appearance of turf sprinklers at this level!


A reasonably new club, AFC Wulfrunians have sat in the higher mid-table area of the Midlands Premier since the 2013-14 Season and it seemed fitting that we would today be seeing them take on a club of over 130 years in the form of Stourport Swifts. The Swifts haven't always played at this level, but they have been there or thereabouts and have had a fairly average time of it since forming in 1882. Still, that didn't stop fans arriving and this midweek fixture slowly started to have people flocking, with Mikey included as he arrived to see what all of the fuss was about. Having spent his life as a Wolves fan, he had never entertained the thought of visiting the Wulfs and this would prove to be a fascinating evening for him. My initial aim once stepping into the ground was to head over to the food van and taste the local cuisine, and of course I promptly saw off a Cheeseburger with onions. With business taken care of, I did my typical walk around the ground and grabbed myself a nice view of the green-seated stand which seemed in fine condition. Mikey wasn't having such a good time of things though, and upon my return from ground scouting he was attacked by the aforementioned sprinkler. With a vast amount of force and a minor dose of wind proving to be a lethal combo, Mikey took a fair drenching from the water and was powerless to resist his first taste of the good stuff. He told me at the time that if he came down with pneumonia that he would blame me for bringing him along.


After drying off in the Midlands sun we continued to watch the warm-up and had a quick peruse of the programme. With no experience of football at this level, Mikey seemed confused to see the Number 13 shirt space blank on the Team Sheets and I had to explain to him that the ability to fill a bench as a part-time club is a mere luxury. And with that it was time to grab a quick beer from the fairly well attended bar at the back of the Stand, before heading back out for the start of the match. The teams marched out, with the Wulfs in Red and the Swifts in Blue.


My opening scouting observation was the Wulfrunians right-winger, Demetri Brown, and his bursting start to proceedings. Despite often over-running the ball, he was a real bright spark and seemed the most likely to be the outlet for the home-side's strikers. Having predicted a 2-1 win for Wulfs before the game, we watched on as more fans entered within the opening 10 minutes and grabbed various drinks for the game- it was nice to see at this point that we weren't South enough to be at a ground where Bovril was off the menu. On the pitch the game had started well for the travelling Stourport team and they pressed the ball well and looked to open the scoring with some good wing play of their own. This was halted though as a crunching early challenge flew in from Joel Caines at left-back for the Wulfs. The tempo was set by this point and although the ref's decisions seemed to favour the Swifts, it must be said that the home side were pushing their luck a bit with some of the challenges. Around the 20 minute mark the first real chance came as Reece Shilvock danced past the keeper and attempted to tap home the opener, only for a well-placed Nick Dodds to deny him with his mighty chested block. The pressure continued from there on and another chance was hit from a Stourport set-piece, this time the Wulfs keeper Josh Moreton slung an arm out to tip the ball away with a great save. With a goal seeming likely at any time, Marvin Robinson, formally of Stoke and Derby, seemed to be having a very frustrating evening up top for the hosts. Having scored his first goal for the club on Saturday, the club's historic 1000th, he was not having much fortune so far and seemed to be loathing every whistle blow from Mr. Warren.


With 36 minutes gone, the opener finally came. Andrew Hudson, the left-winger who had a cracking game, took control of a long-range pass before twisting and turning his way through the home defence and then unleashing a wicked left-footer which curled precisely into the net with the keeper standing no chance. Wulfs 0-1 Swifts. I was worrying that Mikey's first outing to a non-league fixture would be a 0-0, so in some ways it was nice to see the opener before the break. Still, it would've been nice to see it go to the home team who we had decided we would be supporting for the day.
As always, half-time came and went in a flash, and before we knew it the game was back on it's feet. Stourport's trip from Worcestershire had so far been a success and the second 45 would prove to be even better. With just a couple of minutes passed, it was yet again Hudson cutting across from the wing to pop the ball into the goal. Another prance through the box and past the defence yet again punished the reds and gave the Swifts a clear advantage. Wulfs 0-2 Swifts. By this point a few fans had turned focus elsewhere.


One fan got chatting to his mate and shouted out that he had "got his tickets for the Curry Night!", which seemed to be a clear relief to those who'd overheard. Just before the hour mark the Wulfs made a change and brought on a replacement striker. The lad almost made an instant impact on more than one occasion, but his first tame effort was cleared off the line after passing the keeper, and his second, a header, was fluffed over the bar. Had any of those chances made it in to the net, it would've been game on again, however it wasn't to be on this occasion and the Swifts started to pressurise again in the search of a third.


And the goal almost came in bizarre circumstances too as the Swifts right-back hit an ambitious 35-yarder toward the keeper, which seemed to give him a surprising amount to do as he flapped it to safety. The resulting corner came to nothing and Wulfs survived the threat. As time went on the legs became tired, most of the lads no doubt had work in the morning and the thought of a final push to get back in the game was potentially a bit much to ask at this stage. The tiredness was seen across the pitch, and even off it, as a lazy slide tackle went in to an off-the-field player by the stand. Somewhere there was a shout from a distant player of "it can't be a foul if it's off the pitch, ref."- they are all heart at Castlecroft. This theme continued into the latter stages and with just over 80 minutes gone a penalty was awarded for a push in the box. Reece Shilvock popped up to convert calmly and that was the three points secured too. Wulfs 0-3 Swifts. The ref had been poor overall in my eyes, and I think the home team's players were in agreement. After another decision went against them and delayed play, the lads started to fling an insult or two around, to which the Ref eventually reacted too. In a 'flinging his toys out of the pram' reaction, Josh Warren turned to the players and shouted "I've gotta wait for my assistant!"


There was to be no more goal action and the game saw itself out to end 0-3 to Stourport Swifts. A good win for the away side and they had avenged themselves after a 1-5 away loss at Long Eaton United over the weekend. The fans promptly departed and the caterers were on the way too, so quickly in fact that within 4 minutes of the game ending the lights were switched out on us.


So that was it, the evening had drawn to a dark close. Wulfrunians had today fallen in Mikey's first day out to the good stuff, non-league football. The next question of course is whether he is hooked, and I guess that remains to be seen when Pint of Football makes another outing to the glamorous West Midlands! Until next time, cheers Castlecroft for showing me another delightful ground, my 40th visited so far.
Posted by Daz Knapton at 13:19