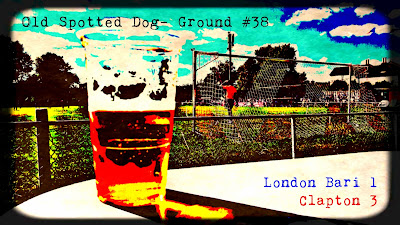 An FA Cup match on the 6th August- yup, you are reading right! Today marked the start of the World's greatest Cup and for teams like Jarrow Roofing Boldon CA, Cockfosters FC and Billingham Synthonia (they're all in there!) it was time to begin the road to Wembley. For many, the thought of a big draw against Manchester United or an away day at Stamford Bridge would be an ultimate dream for fans and for some club owners it could mean the difference between paying the gas bill and having a whip-round amongst the fans. However, those who know the FA Cup know that to even get to the Third Round to have a chance to face the "big boys" means the clubs from today playing at least 8 rounds. Does it stop them dreaming though? I dare you to ask any Biggleswade United supporter.
I was starting my FA Cup adventure too, and after hearing of this tie being on whilst I was in Essex for a family wedding, I grabbed my keys and jumped in the car to head out to the almighty London. With a surprisingly clear route from Southend, I made it to Clapton and began my search for the Spotted Dog Ground. Despite this being Clapton FC's home, today they were the away side as London Bari hosted the tie in the ground that they share. Think of it like the San Siro derby, minus about 79,900 of the seats and fans!

Since London's oldest ground was opened in the 19th century, Clapton have played their football here and have no doubt seen some great moments and some poor one's too. London Bari, however, have only been moved in to "the Dog" as of 2012 and are a fairly new club in the Essex Senior League too. Still, that wouldn't stop both teams wanting the win in this rivalry match and with a potential tie in the next round against Ipswich Wanderers or Sporting Bengal United on the cards, all guns were blazing from the off in this one.

With what I can only assume are some of the ground's original features on display, I made my way around the ground and in certain areas I felt like I should've asked for a shovel to give them a hand to sort out the rubble! I appreciated the ground as being a relic within East London's suburbs, but it was just a bit unnecessarily messy. The stand, taken today largely by Bari fans, was decent and the sun was pure glory- meanwhile the rustic "Tons End" bar did the trick and was well stocked with reasonably prices beverages. But it was the "Scaffold" stand, home to the nationwide famous Clapton Ultras, that was the draw for me, and any other ground-hopper. Even before getting settled in, I was approached by a chap who was telling me that most ground-hoppers don't consider themselves true until they have visited the Old Spotted Dog, and I can understand why. Not only is the ground a classic, but it is known for having outrageous fans who sing ALL OF THE TIME.

Having seen Besiktas and the crazy fans they brought to Stoke, as well as the Hereford masses at Wembley back in May, I would say that these guys were well up there with some of the most insane (in a good way) fans I'd ever witnessed. Last season I was highly impressed with the commitment of the Glossop North End away following at a very cold Scarborough midweek game, but this was even better. In order to show my incredibly jealous friend Tom (Partizan Bristle) what a great time I was having at a ground right at the top of his "to do list", I attempted to mix in with the Ultras and get a cheeky vid to show what he was missing. This didn't go down to well, as one man explained to me that the Ultras are just here to watch the game and want no publicity or social media footage putting on the line, which is fair enough. I then saw a sign which explained that they preferred not to be photographed or videoed as they do what they love, which I could understand also.


With the temperature almost reaching 30 degrees and the sun hitting every blade of grass, it was 3pm and time for the game to commence. The two Essex Senior League teams, who were 7th and 8th in the 2015/16 Season, marched out and with that the fans turned it up yet another notch and belted out some of the classics. "The Bari are shite, the Bari are shite. You're at the Dog, you pay your money, the Bari are shite!" was the opening chorus number, followed by "We're the Clapton, the mighty Clapton. We're gonna win away!" to the tune of "The Lion Sleeps Tonight" by the Tokens. The match kicked off and the Lions certainly were not sleeping, but I think Bari still were. Within 40 seconds of the kick, number 9 Reece Hewitt finished well despite the possible shock of such an early chance and Clapton were off to a flyer. Bari 0-1 Clapton.


Bari were unnerved to say the least in the opening minute, but around the fourth minute it could've been even worse! After the Bari keeper found himself in no-mans land the ball made it's way to a sharp looking Tony Cookey latched on to a pass and hit his shot unfortunately against an on-the-line Bari defender.
And that's just what they did. Around the 10 minute mark they carved their first chance and were it not for such a tame hit, the home team's striker could've perhaps got an equaliser. As time past me by, we were all of a sudden up to 30 minutes gone. The match wasn't of a great standard, but it was of a fast-pace and both sides did look to work chances well. Often the passing was poor and flat, but with pacey wingers queuing up to make some magic happen, it was always likely to be a game with more goals. Two latecomers asked me, the guy in the Macclesfield Town jersey, who had scored the opener, to which I gave them the surprisingly useful answer of "Reece, I think?" and they marched on. So far I had managed to have numerous interactions at the Old Dog, which isn't always the case at some grounds I'd visited. As Bari pressed, but lacked the quality in crucial threw-balls, and Clapton looked to add a second through the impressive Cookey, the game was well poised. I carried on patrolling the ground, listening out for more chants from the Scaffold, such as a rendition of "Sweet like Clapton" in the style of the Shanks and Bigfoot floor-filler "Sweet Like Chocolate", and when I took temporary base by the Bari fans, I spotted a lot of fans with fancy cameras. Perhaps more ground-hoppers getting their fill?


With half-time approaching and the beer calling me, I started to edge closer to the clubhouse. On my way there I got chatting to Leyton Orient season ticket holder, who was wearing a Sydney FC sunhat and a Melbourne Victory top- a man after my own heart! We had a good chinwag for the remainder of the half about all things Macclesfield, A-League and Orient. Luckily I was more informed on the Australian League than some he's spoken too, so I think he enjoyed the chat. Bless.


The bar then provided another friendly chat with a non-regular, I must attract them! This time it was with the ex-secretary and super fan of Ipswich Wanderers, the potential opponents for one of these sides today, who had come out on unofficial scouting business to report back to the gaffer there. Once a scout with then non-league Stevenage, the chap spoke of his friendship with ex-Macc Assistant Manager Efe Sodje and also provided some great conversation to see me through the break. Before I knew it, it was time to head back out for the second-half, where I was rejoined by my new mate in his A-League attire.


The second-half provided a few early chances and on 56 minutes there was to be a second goal. With another case of hack and slash defending, this time the Bari striker left the defence on the floor and slotted in past the keeper to level things up- a thrilling moment with the FA Cup tie being brought back to lift. Bari 1-1 Clapton. The leveller wasn't to last long though and within 5 minutes of the equaliser Clapton moved up a gear. With a corner from the right, the ball was swung in and met well by an eager Freddie Morris thumping in a header that was well out of the keepers grasp. Bari 1-2 Clapton. As a security guard applauded the goal, the chap I was sat with sprung up to ask if "that goal was gonna be on Match of the Day tonight", to which the security guard replied mockingly with "probably!".


To prevent a replay, ironically at the same venue in two days time, Clapton would this time have to press on to seal the game off. They looked able to do it, and in the 66th minute the crucial goal came. The Bari defence were panicking against a high offensive Clapton line and they were forced into error, which led to the Ton's forward picking out substitute strike-mate Fahad Nyanja who eventually popped the ball into the empty net- game over. Bari 1-3 Clapton. My mate beside me took this time to tell me about a darker time at the Old Spotted Dog, and reminisced to a time when he witnessed Arlesey Town beat Clapton 8-2- despite the Arlesey striker only having one arm!


This guy was an absolute hoot! He had some great stories of his days watching games in Australia and Singapore, as well as at Brisbane Road. The stories continued to expand as an Australian lad spotted him in the A-League merch and came over to tell us about his exploits as a Sydney FC fan. I was glad to finally meet a fan of an A-League team so I could quiz him over the odd structure of the league (I won't bore you with them in this post!) and the long and the short of it was that he agreed that the system over there is "a little odd, I suppose!". Ha, knew it!


Back on the pitch, the action had all but fizzled out. Pretty much the last kick of the game saw Morris hit the post from a scramble, but other than that it was a placid ending. Not that Clapton would mind though, as they ploughed through to the next phase and would continue to believe the Ultras chants of going to Wembley could happen. I departed fairly promptly to get back to Southend, having had a top afternoon in the sun at a historic ground. Was it the best game I'd seen? No. Was it a nice, well-maintained ground? No. Was it a place I'd recommend anyone who loves the game to visit? Yes! With the atmosphere being nothing short of electric all afternoon, and the non-Ultra fans providing good company, it was certainly my kind of ground- and one I'm thrilled to have ticked off my list. Cheers Clapton, see you at Wembley in May!
Posted by Daz Knapton at 17:04