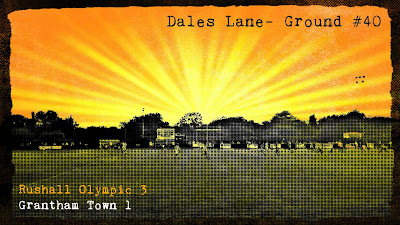 Olympic, Olympic, OLYMPIC!!! Although some may be sick of the sight of this word by now, there are others like me who are still on the Team GB buzz. So much so, that tonight I jumped in my car and headed down to Walsall for an evening at Rushall Olympic.

The team, known as the Pics, were to be the second West Midlands team visited in successive Tuesdays with my good pal Mikey, who up until last week's jaunt to Castlecroft Stadium was a non-league virgin. Alas, he was back for round 2 and he even convinced his Dad to pop along for the ride too. Meeting at the ground around 7pm, I had already had a good snoop around and observed yet another decent West Mids ground. With everything from a nice couple of new stands, an olden-style Clubhouse and even a Club Shop, this was what I would describe as a "proper" non-league ground. It had the mishmash appearance of a club that was slowly but surely on the up, which as readers of my Blog will have seen, is not always the case. One highlight on the walk around was when I accidentally walked into the loosely guarded Board Room whilst looking for the bar. Oops!


Tonight's opponents were Grantham Town, a club that I was only vaguely familiar with due to a recent interest I had developed when I met their management team at Wembley back in May at "Non-League Finals Day". I had felt a need, on this occasion, to join allegiance with the home-side thanks to one person. José Veiga, former Macc Town Keeper and Cape Verde International veteran, is a chap who I have always followed since he left the Silkmen in 2012 and I was thrilled when I found out he'd made the move from Redditch United to the team I'd be watching tonight. Despite the personal links, I realistically expected a close game and looking at the early formed League Table both sides were level with 4 points each before the start of play. My pre-match prediction, based on my expectations that Veiga would pull out a top-notch showing, was for an exciting but ultimately goalless game.

I am studying the League with interest this season, having seen Warrington Town, Stafford Rangers, Nantwich Town and Coalville Town fairly recently, and I was therefore happy to be visiting yet another team at this level. For Mikey, it was his first trip to a ground from this division, and I imagine that after the night we had it would not be his last.

It didn't start out as a perfect trip though, with a deafeningly loud speaker blurting out Chuck Berry's "Go Johnny Go" from one side, and the sun (I know, shouldn't complain!) providing a blinding backdrop from the other for a scorching opening to the match. Before play could begin, I quickly darted into the Club Shop and was astounded to see a few Grantham followers looking for pens. With the question on the tip of everybody's lips, one fan explained that when they travel to grounds, they buy a pen as memorabilia. I preferred to get a scarf, but each to their own I suppose.

Just before the teams entered the field, the music died down and there was a silence that could only be rivalled by that of a theatre audience awaiting the start of a play. And in tune with this, the actors, sorry, players, walked out on to the field accompanied by the most dramatic trumpet-led instrumental music ever composed. Feeling like we'd walked in to Odeon for a second, the players took their place on the field and finally the crowd noise level picked up a bit.

The match started with much gusto and passion, which saw many an early well-nourished challenge and plenty of attacking intent. The linesman on the side nearest us had his early feelings summarised by one loud-mouth local, who shouted out to him "yaw need a cap on lino!"

Within the opening 5 minutes I had already singled out Rushall's Henry Eze, who I'd seen and enjoyed playing for Chasetown last season, and it was his solid defensive play that enhanced my thoughts on the game potentially looking at a 0-0. However, as the game panned out, it seemed that the team who would be likely to score first would be the Pics. With an ambitious Alex Reid commanding the left-wing he almost showed why he'd been the top-scorer for Olympic so far by hitting the first chance low, but this time into the Grantham keeper's hands. Grantham, aka the Gingerbread's, were looking a tad crumbly and only forged a couple of long-range half-chances from the opening 30 minutes. With the classic three wise stalwarts, that every non-league club has, stood just a few feet away we were also treated to some sarky chants towards the officials and opponents, as well as some inaudible Midlands talk that usually ended with the word "Toss-pot".

Back on the pitch Rushall were giving the lads a frustrating time as they failed to capitalise on the early dominance. After a slide into the box from an attacker saw the ball lift up on to the bar, and a rabona cross from Reid that could've quite easily crept into the danger zone, it was going to take a moment of magic to defeat a gritty Grantham defence. Between more rants from the Pics trio, including one fairly unimaginative call of "bloody school boy!" towards the lino, we were getting closer to the goal. And on the 40th minute it eventually came, and it was well worth the wait. Zak Martin, who had played very well and showed the passing range of a young Danny Murphy mixed with the skillful movement of a non-league Pavel Nedved, took his chance well with a spinning, twirling, whirling volley that flew across the body of the keeper and past him into the goal- very nice indeed and a funky celebration to match. Rushall 1-0 Grantham. The half had a much needed goal at a crucial time and the half would end at 1-0, with Grantham looking rather toothless and somewhat disappointing so far.

The half had not lacked entertainment at all, and in the midst of the funny jibes being given from the lads to our left, the numerous chances from the Pics, and the thrill of seeing José Veiga make a couple of nice saves, I forgot to mention earlier that there was some very good defensive play going on from both teams. It's the sort of footy I love to see- solid heading ability, the odd heavy lunge and general power from both defences against quick attackers. As darkness arrived and the floodlights came out to play, the sides came back out and we headed back to the stand to see what the second-half may bring.

The penultimate 45 minutes of the game started very slowly compared to the first-half, and the majority of the opening 15 were spent chatting to a member from the club who was telling us about the upgrades that will be going on over the next year or so. It's always nice to chat to people involved with a club and this Hulk Hogan lookalike was very friendly and gave us a great insight into what life was like here at Dales Lane. Despite this, we were gagging for another goal though and it finally came around the hour-mark. Alex Reid was the man to add the second, his fourth of the campaign, with a nice finish after rounding the keeper and having the empty net at his disposal. Rushall 2-0 Grantham. And with that it was time for Grantham to stick or twist, however their opposition held all the cards at this point and promptly added a third. With free-kicks and corners coming in left, right and centre, Zak Martin added his second volley of the game with a simpler finish this time. Rushall 3-0 Grantham. For the Gingerbread's fans reading this thinking the evening was all doom and gloom for them, they can at least enjoy this next bit. A reasonably well hit strike from Ben Saunders went into, and then back out of, the arms of so-far-safe Veiga and the ball rolled into the net to give the travelling fans a glimpse of a comeback with 20 minutes to go. Rushall 3-1 Grantham.

The unfortunate howler for Veiga did inspire a bit of zest for Grantham, and they looked likely to grab another before the end as they pushed on. One woman nearby, who had offered exceedingly obvious advice to the home-side's players throughout the match, decided to do her deed by shouting out "come on Pics" in such a way that it sounded like "come on Pigs", and to top this she single-handedly warned the lads that the away side were going for it by playing three upfront. Not that Henry Eze needs advice or warning from everyone, the lad was having a solid game and within the final 5 minutes he showed the burst of pace from the back that you'd expect to see from the likes of deep midfielder. He picked up the ball around the half-way line, before skinning two of his opponents, laying the ball off to a mate, making a long run out wide and eventually getting the ball back again. The only reaction that the opponents could have was to take the lad out and prevent the potential of another goal. As it happened, there weren't any more goals and the ref finished the game off swiftly. A solid win for Rushall that sees them leap into the higher end of the division, albeit at an early stage. Whilst Grantham would face a tiring 70+ mile ride back to Lincolnshire with defeat upon them, the home side were in a buoyant mood after a second win of the season.