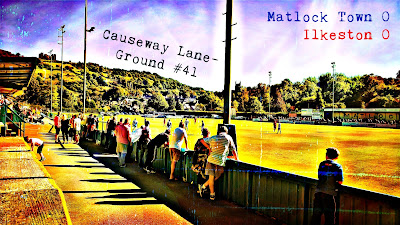 August's Bank Holiday Monday fixture list, one of the biggies in the non-leagues, also doubles-up as the proverbial nightmare in terms of traffic on the roads and would therefore mean that any plans made for ground-hopping should be thoroughly researched to avoid busy patches. In future I must remember that!
Setting off at 11:45am from Stoke, with a plan to visit the Heights of Abraham and grab lunch before the game, the horrible Bank Holiday reality was that my Girlfriend and I would instead slowly drive passed the wonderful looking cable cars and many a scrumptious Pub with Beer Gardens galore on the miles and miles of sublime rural roads. We eventually pulled up at Causeway Lane around 2:30pm knowing that the harsh reality of a Greggs sausage roll would be our destiny. Alas, the sun was shining and we had at least made it in time for a cheeky pre-match pint before seeing what the Gladiators and the Robins could serve up for us.


Today's opponents were fellow Derbyshire side Ilkeston. Despite this being Matlock's 6th game of the season in the Evo-Stik Premier, this afternoon was only match number 2 of a very tough start following much off-the-pitch drama. The biggest non-league scandal of the 2016-17 season so far, thankfully, seems to have been partially resolved in some way as the Robins finally kicked-off their campaign on Saturday with a 0-2 defeat against Ashton United, however with all that's gone on you can't help but think it's going to be a long one. I have actually had the privileged of seeing Che Adams play some stunning football in a pre-season friendly for the Blades at Moss Rose last season and I had thought then that he'd be destined for big things- and the 20-year old had actually managed his first Birmingham City goal before Ilkeston had kicked a ball.


Matlock's game just two days ago had been a 5-3 thriller, albeit a defeat they would not have wanted against the league's new boys Warrington. Today's game would be likely to be more of a close affair though, and looking through the match programme, Matlock had won the previous two encounters by 1-0. This would be my pre-match prediction for the game this afternoon too.


As the match began, I glanced around the stands and noticed one thing in particular. Considering Matlock is probably about as far away from the sea as you can get in England, there seems to be a hell of a lot of options to get yourself some Fish and Chips! With the catering in the ground following the trend too, I found myself bemused by how much battered cod was on display and I felt like I should've been back home watching Whitby Town rather than the landlocked Gladiators. On the pitch, the action was pretty end-to-end and the Matlock skipper almost gave his side an early lead, only to be denied by a defender on the line. The flow continued in this style for most of the first-half, with Ilkeston forging a long-range chance of their own on the 16th minute. Both sides were playing some quality football, but neither were looking likely to get clear chances- with the long-ball technique up to the pacey striker being a favoured tactic for the two teams.


Ilkeston's fans had come out in force today and made the 20 mile journey through to Causeway Lane, which was great to see. With over 500 overall in the ground, it was the away following who were offering the chanting so far, pelting out the classic "can you hear the Matlock sing? No, NO!" and general referee hatred that is a feature of any non-league match. The game was still tense, with not many chances falling in either direction and it was clear to see that today's game would not have the goalmouth action that my Tuesday trip to fellow Evo-Stik side Rushall Olympic had.


It is worth noting at this point that 75% of the 0-0's I'd encountered on my travels were whilst my Girlfriend was in attendance, and it was no surprise that at half-time the same score was on the board here. It certainly wasn't the worst goalless draw I'd seen so far, that award is firmly in the hands of Scarborough Athletic and Glossop North End from last season, but I must admit that the highlights of the afternoon so far were the ice-cream and the scenery. I quickly popped over to the pleasantly busy Clubhouse at half-time to grab a beer and on my way back around I got myself a classic tourist shot as the polite Steward offered to take a snap of me in front of the player entrance.
The day had initially started off with the hope of going down to Solihull to see the mighty Silkmen, and in fairness I was still at a ground, watching a team in blue who have the initials MTFC, but with the sun beating down, a beer in my hand and a feeling of being by the sea, I was glad at this point to be at Matlock ready for the second-half. Despite this, I couldn't help but check my phone around the hour-mark and somewhat regret missing what was so far a 2-2 stalemate. Here at Causeway Lane, the reds were starting to edge possession and seemed eager for their first points of the season. The main inspiration for the home-side was when fresh blood entered the pitch in the form of Jake Green, who almost made an instant impact with a couple of half-chances. In a match that was becoming all crackle and no pop, it seemed likely that if a winner was to come that it would be from a defensive error, an inspired move from a set-piece or perhaps a ruthless break. With 85 minutes on the clock, the latter came and should have seen the Gladiators crush the Robins and take the spoils. The number 4 for Town, a lookalike of Macclesfield's Kingsley James, made a surge into the box and was found unmarked in the box. A misplaced shot was unfortunately scuffed wide though, and that was to be the cause of the largest cheer of the day for the fans as they prepared to head home with a point on the board. As a chorus of "you're shit, and you know you are" flowed from the away end, the game played itself to a goalless end and it was all-square for today.


With a post-match date lined-up at Nando's in Stoke, it was time to take on the journey home. Seeing the Macc had taken a late 3-2 win against the Moors, I wasn't too down-heartened to travelled almost 3 hours to a 0-0 display and knowing that juicy chicken was to follow, I left Matlock with a smile. This atmospheric ground with the most amazing of backdrops is certainty one I'd recommend highly- as long as you don't do it on a Bank Holiday Monday!
Posted by Daz Knapton at 15:29