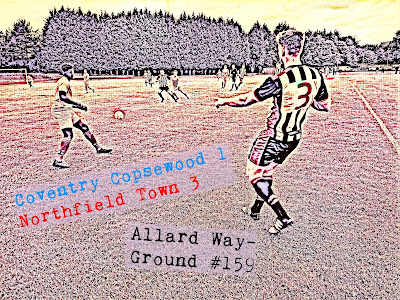 Having suffered an off-season break of fifteen long days since returning from Italy and the EURO Under 21 tournament, yesterday would be the first day of preseason 2019/20 for 'Pint of Football'. Last season I spent most of my time with Stone Dominoes in the North West Counties League in what was an absolutely crazy year! Having started as their "Twitter guy", I became the Club Secretary during July 2018 and by Christmas when players and management left the club, I helped to rebuild a new club in time for the second part of the season. At one point, I was due to be on the bench for a game away at Ellesmere Rangers, believe it or not! It is a miracle that we made it to the end of the campaign, albeit in last place, but with the club being secure again and ready for competing in the Staffs Senior League I decided it was my time to leave and get back on with the good stuff. A lot will be different for me this season as I look to fall back in love with groundhopping and all being well the aim is to reach 200 grounds by the end of the season. I have also changed jobs and now live in Stafford, but with Coventry being my place of work I have now opened the door to a whole world of Midlands madness and that started with my first Coventry ground, Allard Way.


I've always enjoyed preseason due to the fact that I can usually find a match whatever day I fancy, so I began my plans and with Coventry hosting many non-league clubs in the shape of the Sphinx, United, Alvis and Plumbing just to name a few. Apparently the city has a Football League club too, but I couldn't find where they play Coventry... ahh well, I suppose I'll find them at some point. In the meantime, I knew that Allard Way was a good place to start off and with an evening shift at 5pm to follow in Earlsdon, this ground was just about local enough to suit my needs for a 3pm kickoff.
Yup, a bit of a quirky one to start off with at Copsewood Sports Club and before eventually finding the football match I encountered a labyrinth of sport and entertainment, with the club offering everything from bowls to a Saturday night Bavarian Oompah session in the clubhouse! I had a good mooch around and when I eventually got on to the main ground I was met with an ongoing cricket match and so I pretended to be half-interested whilst making my way over to the Ken Naylor Memorial Stand to have a look at what could have been. This small main stand, pictured earlier in the post, is a sky blue similar to that of City's and I have been informed by one of my fellow football fanatics that the seats are actually from the old Highfield Road ground. Makes sense I suppose, being as how most of the non-league grounds I've been to in Stoke and the surrounding area seem to have old Bet365 Stadium seats knocking around.

My tour then saw me head upstairs into the clubhouse and it was at this point that I found one of the greatest seats in history. From the balcony bench that I sat on, I had a view of more sport than the eye could comprehend. Not only could I see the cricket match going ahead, as well as the bowls I'd passed on the way in, but I could also just about see the empty rugby field, the televised horse-racing through the window AND between the treetops I could see the Copsewood and Northfield lads warming up ready for the match I'd come out to see. Now I'm no mathematician, but that adds up to a whole lot of sporting goodness.

The day's game would be between two members of the Midlands Football League, with the hosts being in Division One (Step Six) and their Brummy based visitors being in the division below. Northfield Town did actually win the second division of the MFL last season, edging out another Coventry side in GNP Sports, but for some reason or another Town weren't able to go up and so GNP took their spot alongside the likes of Copsewood. The home side remain in the same division as they have since the Midlands Football Alliance and Midland Football Combination leagues merged back in 2014 and last season's 15th place finish was their lowest yet. This would surely mean there would be a close encounter here today at Allard Way and I made a 2-1 prediction for the hosts on this occasion. I knew the visitors would be tough, but would they be good enough to grab the win?
Once the lads finished up their warm-ups, went for a pee in the nearby bush and decided who was starting, the game got underway. Northfield had the first chance as their exciting number 11 worked his way down the wing and into the box before looking to set up his attacking pals. Both strikers fluffed their lines and on this occasion Copsewood went unpunished. Looking around I'd say the attendance was a respectable 35 or so and as with many games at this level it appeared that a good chunk of the viewers were with the away team, possibly providing transport as much as support, making for a decent crowd on this warm but drizzly afternoon. The visitors continues to pagger the Cov goal but with half an hour already gone they just couldn't put the ball in the net. The sky blue home side eventually forged a chance of their own as their lanky number 9 forced the young opposing keeper into a save, but aside from him and the number 4 in central midfield, the hosts didn't seem to be quite finding their rhythm so far. Northfield eventually took one of their chances and it was the number 11, this time on the receiving end of a parry from Cov's keeper, who could tap home the opener. Copsewood 0-1 Northfield.

Just before half-time things took an unexpected turn as the heated "friendly match" broke into handbags. The Cov number 4 wasn't happy about a foul by Northfield's number 16 and from what I could see the lad threw an arm in on the youth. This caused a few lads to get involved, with the Copsewood number 10 barging in and getting a bit too involved. Once the Ref had spoken with his lino, he dismissed the Northfield number 16 and also showed a yellow to Cov's 10. I was half-expecting to see my first use of the new sin-bin rule, due to the behaviour of a couple of the players, but it wasn't to be. As play resumed, Northfield's keeper turned to me and said "dramatic first half". He wasn't wrong!

After a quick sip of water and a swap of sides, the Ref soon got us back up and running with Copsewood looking to turn the tables on their disadvantaged opposition. First up the tricky right-back went close by forcing a save from the keeper, but nothing came from the following corner. The frustrations for number 10, already on a yellow, continued to rise and it culminated in him dropping a C-bomb on the Ref after he accused him of falling over. At this stage, I was beginning to wonder if the sin-bin was a myth? If pushing opponent players and swearing at the Ref don't get you binned, what will? Another Cov player went into the book on the hour-mark but on the positive note for the hosts, all of the football was being played in the Northfield final third. The pressure finally told in the 65th minute as a 25-yard equaliser was struck home in splendid fashion. A great goal for the hosts! Copsewood 1-1 Northfield. Cov couldn't make the most of being level-pegged though and just five minutes passed before Northfield retook the lead against the run of play. It came as a disappointment to the home side who had put all of their efforts into getting back into the tie. Copsewood 1-2 Northfield. With the game almost seeming to be calming down, the Ref decided now was the time to wind a few of the players up and this time he turned his attentions to the subs. He used a break in play to turn to the sideline and shout at players who were kitted up and stood off-field, telling them to sit down. It's always a drama with referees!
The final fifteen mins saw ten-man Town continue to dominate and when their left-back stepped up to take a free-kick of good quality that flat-footed the keeper, a third and final goal would land in the back of the net. Copsewood 1-3 Northfield. The game ended nice and promptly meaning that I could shoot off to work with time to spare. All that remains to say from me is that it's great to be back in non-league action! Following a week of top-quality international matches on my last ventures, it was so good to be back in the grassroots field, literally in a field, for a proper kick-about in my new footballing hunting ground. Thanks to Copsewood and Northfield for the game- it wasn't quite up to the standard of Germany's 6-1 rout of Serbia in my last outing at Stadio Nereo Rocco in Trieste, but it was still a more than worthy trip to my 159th ground. Cheers lads and good luck for the season!
Posted by Daz Knapton at 07:37