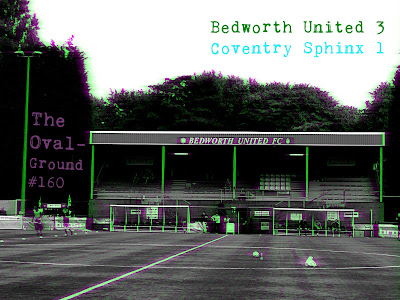 Match two of pre-season and time to crack on with my aim of reaching the big 200 by the end of the season. I have applied for tickets for Budapest, Bucharest and Dublin for EURO 2020 and I have a big trip abroad planned in July 2020 so I'm hopeful of making it a memorable one to mark my double century. Will it be as good as my 100th? I suppose we'll have to wait and see!

Since moving to Stafford and beginning work in Coventry, my groundhopping prime focus has moved from the north-west of the country to the midlands area and with this shift I have opened up all sorts of new opportunities. This season, expect to see me knocking around at the finest that Birmingham, Coventry and Leicester have to offer- plus everything in between. Tuesday night would be one of those inbetweeners and after finishing for the day I was on the train over to Bedworth in search of my 160th ground. The choice was between the Oval and Boldmere St Michael's Trevor Brown Memorial Ground, both of which took my fancy, but after running a Twitter poll it was decided for me that Bedworth would be my next port of call. I arrived in the town with a good hour or so to spare and so I searched high and low for a bit of dinner and a pre-match pint.

The Bear & Ragged Staff was my only viable choice, so I popped in and noshed out on Spoons' finest chicken burger before meandering through the mean streets of the Warwickshire market town. I made it into the ground in one piece and after relinquishing a fiver to get in, I populated the clubhouse for a wee while. My first impression of the ground was very positive. Standout features for me were the main stand and the great blend of old facilities mixed in with the new pitch and up to date feel. I've been to very few grounds where they've achieved this delicate mix to a standard of this quality, so I have to give the Bedworth boys a round of applause at what they've got at The Oval. As you can see from an above picture, they've obviously spent good money on getting an artificial pitch in, but they haven't made the common mistake that some clubs make in knocking down their surrounding structure in order to replace it with a tin can stand that is as generic as the next one. When I visit a ground, I like to see the nooks and crannies and this one certainly offers a memorable and high standard ground.

For me, the key to a successful non-league ground is in using your usually quite limited monies on the practical stuff, like the pitch, equipment, etc. whilst also maintaining a sense of originality. There have been so many grounds I've visited that have a splendid brick clubhouse that serves three different craft ales, yet the pitch is nothing short of a pig sty! Thankfully, this was not the case here and the Southern League outfit looked in good nick to host Midland Premier League side Coventry Sphinx. My last outing had taken me to a Coventry ground in the shape of Allard Way and already the theme of my season has been set with this match also featuring a team that lives in the same city as my workplace. No doubt it'll only be a matter of time before I'm down at Sphinx Drive to sample their goods.

With kickoff looming I stopped mooching around and got in position by the halfway line ready for the Greenbacks to get us underway. I'd completely messed up my pre-match prediction last time out, so I am delighted to make note that this match would be one of the rare occasions where I guessed the correct scoreline- should've stuck a tenner on the guys in green! The hosts started on the front foot against Sphinx, who were donning a very nice sky blue and white strip, complemented by dark navy shorts and socks. I love me a good kit, hence my decision to rock up in my ludicrous purple Hua Hin City top. Yup, if you were there you'll now know exactly who I am!

Inside the opening fifteen minutes, we were treated to an early goal and with the Bedworth attackers linking up nicely, Luke Rowe was slotted in through a gap in the Coventry boys' defence and the number 10 showed a cool head to finish a great move. Bedworth 1-0 Sphinx. The remains of the first-half were entertaining enough yet not exactly enthralling in terms of goalmouth action, with the main point of note being a little scuffle amongst the players after a tasty tackle from a familiar face lining up in the visiting team. The Sphinx centre-back made his way into the attacking box and nodded a header over at one end, whilst at the other Blyth tamely tried his luck to no avail. When the Ref blew up for half-time, I headed back into the clubhouse for a top up on my beer so that I could find a prime spot for the second from the main stand. Although it wasn't a particularly sunny night at The Oval, it was a warm one and in my opinion it was a perfect night to be spectating.
Sphinx started the second-half in search of an equaliser and the MFL side, who finished 9th last season in the Step Five league, weren't a million miles off the pace of their Step Four opposition. I know that it's only pre-season and it's not always a true indicator, but United looked in good form in this outing and considering they finished rock bottom of the Southern League Premier last season, this test was proving to be a good one. With pressure being created again by the home side, it was eventually a corner that led to Parrott having an easy tap-in to double his side's lead. Bedworth 2-0 Sphinx. Amongst all of the action, I somehow missed out on one of the ground's hidden gems- the Peter Randle Boardroom Terrace, which sits snug above the clubhouse as a little VIP treat. A very nice touch.

With the last ten minutes approaching, the visitors gained a big chance of their own from a free-kick within shooting range. As the Sphinx number 9 stood above the ball ready to hit one, a fan from the touchline shouted at another player, asking him "why aren't you taking it? You've scored the last two!", but despite the pressure the Cov forward ran up and cracked the ball sweetly into the net to set up an entertaining final few minutes. Bedworth 2-1 Sphinx. The goal would, however, only prove to be a momentary blip for the hosts and it would be up to their lanky centre-back and scorer of the second goal to double his own tally as the unlikely hero struck again in the 83rd minute. Bedworth 3-1 Sphinx. The rest of the game played out and came to an end, meaning that for me it was time to say a fond farewell to The Oval. What a great night out in what I can only describe as a fairly morbid town. Bedworth, you are lucky to have this on your doorstep! Get on down and support the Greenbacks!
Posted by Daz Knapton at 13:39