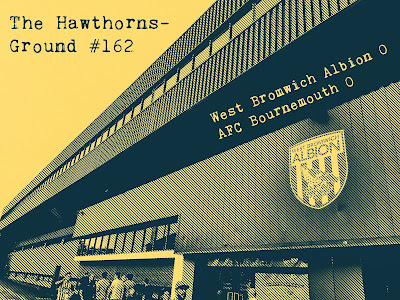 There's nothing like writing up a 0-0 between two of the country's finest sides in a fairly standardised Championship stadium, right? Yup, I should have seen this one coming really as I set out to tick off my 22nd Football League ground and for the second season in a row I would see the real difference between top flight friendlies and non-league ones- pretty much a year to the day since I popped up to Stoke to see the Potters take on Wolves in an equally sombre match. Foolishly, I'd predicted the hosts to sneak a 1-0 win. Imagine expecting to see a goal in a pre-season game between a Championship and Premier League side. Ludicrous!

I suppose in fairness to the two sides, it would be a tall order for anybody to live up to the goalfest that came from my match just two days prior, as I went over to Telford to see Wellington Amateurs win an eight goal game against higher opposition in the form of Eccleshall. This Friday night would be my fourth match of the season and also marked the start of a week off work, which means a whole heap of action for me! With the Out Of Office turned on and the train from Coventry to Birmingham booked, it was time to begin the search for West Bromwich Albion's stadium.
Once I made it to the ground, I had a walk around the outskirts to see what this former Premier League ground had to offer in terms of pre-match watering holes. The answer- none. However, they do have a Greggs, which we all know is the true mark of any quality away day! Inside the West Stand was more choice of pastries and also a particularly tasty Sadler's craft lager called "Peaky Blinder", which was a nice surprise at an otherwise fairly generic looking midsize stadium. Don't get me wrong, it had it's quirks, with a few highlights to mention- such as the column that allowed you measure how high you can jump, a gaming corner and even a wall of fame. Who says the modern game is gone?


In all seriousness, looking at the wall of fame was a great throwback to seeing some of the great Premier League stars the Baggies have seen come and go over the years. Chinese Super League newbie Salomón Rondón, ex-Manchester United lads Darren Fletcher, Jonny Evans and Jonathan Greening and of course everybody's favourite Hungarian, Zoltán Gera. Of course, the current crop aren't too bad neither and after getting so close to bouncing back into the top flight just a couple of months ago, the aim for Slaven Bilic this season will be to go one step further than the Semi-Final heartbreak against rivals Villa and get back to the promised land where they'd been for the eight previous seasons prior to the one just gone. Bournemouth on the other hand are now one of the more established sides in England and will be entering their fifth season in the top tier. Not bad for a side that ten years ago almost dropped out of League Two and into the oblivion of non-league.
The south coast visitors got the game underway with some early pressure, but with international strikers in the form of Norway's Josh King and our very own Callum Wilson, that's hardly a surprise. Semi Ajayi was coped well though and largely kept a tight grip on Wilson in particular, eliminating the chances he would have. A Baggies half-chance went wide just before the half-hour mark but ultimately the first 45 would come to a calm close. Bilic and Howe retreated to their dressing rooms and the few thousand fans in the ground began to analyse the match so far. A few fans said they were expecting more action, whilst others seemed reassured and positive about the subdued display so far. When facing higher league opposition with good striking options, it is nice to go in having not conceded.

So far the best moment of the evening had been when the crowd cheered for the steward as she hunted down and returned the ball to The Cherries goalie from the empty stand behind the goal, but with the second-half offering the likes of Kieran Gibbs and Oliver Burke a chance to get some game time, it was a little bit more competitive and in fairness West Brom could have nicked a goal or two. At the final whistle the fans headed off in high spirits knowing that they'd more than held their own here and although friendlies aren't exactly the be all and end all, they do offer the managers a chance to try stuff out, the players a chance to get a bit of form and fitness together, and of course the fans a chance to see what they've got to look forward to for the next ten months. Hopefully not too many 0-0 draws!