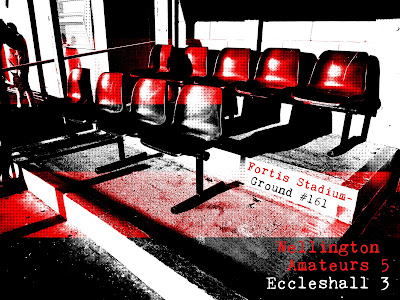 With pre-season in full-swing by now, the fitness levels are starting to get better, the long days of work follow the summer match nights and no, this is not just true of me, but it is more a reflection on the current state of play for most footballers who are getting ready for the 2019-20 season. Make the most of those daylight evening matches in delightful conditions lads, they won't last!
Since moving to Stafford in April I haven't actually had the luxury of being able to drive to a local ground yet, with both of my outings this season so far being pre or post work trips to nearby grounds around the Coventry area. Don't get me wrong, the last one was a real gem over at The Oval in Bedworth, but there's something extra satisfying about visiting a local ground. Even if you've never been there, it always seems somewhat familiar and in this case it was VERY familiar as I would be watching Eccleshall- a side who have about a third of the players and management team from the side I was involved with last season, Stone Dominoes. Nothing like a bit of non-league incest!
With temperatures soaring into the late twenties on this fine Wednesday evening, I spent the day stuck inside working on Business Continuity Plans for my job and generally hating life, so the chance to get out of the house and have a ride out to Telford was one that I could not pass up. I wonder how many people have ever looked forward to a ride out to Telford as much as I? Maybe someone's Nan? Anyway, enough of that- with a 7:45pm kick-off I found myself at the Fortis Stadium on School Grove just the right side of half past and after a leisurely stroll over to the ground I was eventually met by the gatekeeper. Donning his sun cap filled with badges from groundhopping exploits, the gentleman shook my hand and asked me if I was playing. Wondering if he was joking, I simply said "not tonight" and he then continued to quiz me on why! I suppose technically I wasn't lying when I said that I was retired, but either way he seemed happy of the chat and let me sail on in. Nice chap. Of course, with it being a hot night (like I need that excuse) my first stop was the clubhouse, pictured above, and a nice cold can of Staffordshire's finest was served up with smiles and all.


I had a quick wander around the ground, bumped into my pal Alan, who's son players for Eccy, and had a natter with the Newcastle Town coach. His side take on Eccleshall next week in a match that will divide the Baxter household, so I think he was here on a bit of a half-support, half-spy mission this evening. I continued to potter about until I found a leaning post just in time for kick-off. The sides came out and got the game underway, but not before I could pluck my usual pre-match prediction out of the sky. These two sides, of the tenth and eleventh tier respectively, were likely to be evenly matched, but having followed Eccleshall from afar last season I fancied them to eventually grab a 3-1 victory. Both games I'd seen so far had seen the same scoreline, who am I to bet against a third?


Less than a couple of minutes had been registered on the clock when the opener was scored and after doing direct from the kick-off, an Eccleshall corner would eventually fall to their number 11. He graciously teed the ball up for himself before acrobatically striking from inside the area to give the visitors a perfect start. Wellington 0-1 Eccleshall. The Eagles, in front of a decent crowd of around 60 or so, will have been chuffed to take the early advantage over a side who finished 7th in the West Midlands League Division One last season, compared to their own 13th place in the 2018-19 North West Counties Division One South campaign, however, the smiles from the dugout wouldn't last too long as Craig Bould saw his side soon back to being level-pegged after a soft penalty was conceded and converted. Wellington 1-1 Eccleshall. Both sides would proceed to play this match as though it were the real deal, with plenty of "non-friendly" tackles from Wellington's number 12 and a couple of half-chances squandered by Baxter at the other end. The number 10 firstly headed over before his second effort was closed down by the keeper moments after leaving his toes.
I popped over to the other end of the ground in search of a bit of shade, which was instantly made a worthwhile choice when I overheard the fully kitted Wellington sub keeper telling locals about all of the trophies he'd won over the years. "There's a picture of me with the three trophies I won one season, next to another of me when I did the double"- alright, calm down Buffon! Meanwhile on the pitch it was still pretty even, but Wellington were growing into the game whilst Eccy seemed to be looking forward to a half-time breather. The Ams eventually took the advantage as their number 14 ran through on the right-hand side before slotting in from a fairly unfavourable angle. Wellington 2-1 Eccleshall. Aside from one howler missed by the Eagles just before the break, the rest of the first-half would remain fairly uneventful.


As you can see from my pictures, the ground was fairly basic but also in really good condition. The main stand had that delightful smell of fresh timber combined with drying paint, whilst the other congregation areas seemed fairly decent too. The pitch itself wasn't great, but compared to the pre-season conditions of last season it was certainly an improvement on some that I have seen. Eccy's Pershall Park has a similar format from what I can recall from my visit there in the pre-season of 2017-18, with the main seating area backing on to the bar. Perfect for those old-age drinkers... and the young ones too!


The Eagles began the second-half hoping to emulate the first, with Baxter again going close for the visitors. Some fans would call their keeper's save a top stop, but from where I was stood I think the strike was too sweet and was practically hammered straight at the host keeper. Either way, they would rue the miss on the hour-mark when the Eagles goalie would take down a Wellington striker, meaning that a second penalty would be slotted home- this time by the red shirted number 8. Wellington 3-1 Eccleshall. By this stage the shape and formation of the Eccleshall eleven had gone out of the window, with their relentless right wing-back starting to get very frustrated at the lack of options. At the other side, the Wellington right-back was having much more joy and he scored arguably the goal of the game with a nice finish from the wing. Wellington 4-1 Eccleshall. Three minutes later he made the most of the sleepy opponents and made another darting run that ended in him doubling his tally on what can only be described as a fantastic second-half display. Wellington 5-1 Eccleshall.
With just five minutes to play, Eccleshall finally decided they were going to give it a go and 83 minutes on from their early opener, the first of two consolation goals came as Jordan Benton slotted home a well-executed penalty. Wellington 5-2 Eccleshall. And as if that wasn't enough, the visitors would grab another, this time from a free-kick, as their number 7 rasped one home from 25-yards. Wellington 5-3 Eccleshall. Although the scoreline now looked a lot more respectable from the visiting perspective, it was still an overall disappointing result for Kyle Adams, who's team don't have long before their opener against West Didsbury & Chorlton at the start of August. For me, the next outing will be a rare trip to a "big ground" as I hope to make it to The Hawthorns for West Brom's Friday night match against Premier League AFC Bournemouth. It's about as hipster as it gets for me and no doubt I'll be taking on more non-league grounds next week whilst I am on holiday from work. Yaaaaaaaaaaay!
Posted by Daz Knapton at 11:34