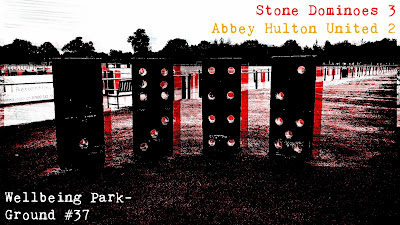 Yesterday marked the 50th Anniversary of the England National Team's greatest footballing achievement and that was enough of an excuse for me to find a game, not that I need one! With the luxury of an early finish from work, my original plan of a first trip to Eccleshall's Pershall Park had fallen after their match against Leek County School Old Boys was cancelled. This left me with two options; a risky dash down to Willenhall to try and catch Sporting Khalsa vs Punjab United or a safer bet of seeking out a more local ground in Wellbeing Park.

Even with a 2:30pm kick-off for this one, I was confident that with the ground being a mere 20 minute drive away from work, this would be a banker on a day like today. I arrived in good time and was instantly impressed at the facility I had just entered. With immaculate fenced small pitches to one side and the entrance to the ground to the other, the sun was blazing down and it was time to seek out some food. I passed through the olive wooden turnstile unopposed, which meant that I was in for my second free match in 3 days- having visited another 5-goal game at Seddon Street on Thursday.
On the left there was a smart and fairly modernised Cafe and on the right were pitches galore, including Pitch 2 which had some of the players for this afternoon's game warming up. Without delay, I headed straight for the Cafe with the hope of another intimate moment with a Wright's Meat and Potato pie! For just short of 4 quid I was able to seal the deal and also pick up a can of Carling too, what more could one ask for? Inside the Cafe was a small selection of people here for the game, a large choice of historical items and a couple of boxes of football boots for sale- just £5 per pair! I sat in the conservatory-style area and made light work of the pastry goodness, before heading out to see whereabouts the actual stadium was within Wellbeing Park.


I certainly wasn't expecting masses of spectators for this one, with today's Staffordshire County Senior League opponents Abbey Hulton United likely to travel lightly. Even so, I was struggling at this point to find anybody who may know where the match was being played. I had hoped it would be in the main stadium, but when I spoke to the knowledgeable chap on the Cafe's till he said that Dominoes played on one of the standard pitches and it was in fact Old Alleynians who used the stadium. Before this trip I didn't realise how far down the ladder Stone Dominoes Football Club was, having read the glorious story of how in 2003-2004 they made it to the FA Vase 5th Round. They had since resigned from the North West Counties League and had a couple of years out of the game before making a comeback last season in the Staffs County League. They also signed comedy actor (and Sealand international footballer!) Ralf Little in 2008, apparently.


Despite the game not being played on the main stadium's pitch I asked the man if I could visit it for groundhopping reasons, to which he very kindly opened up the gates and showed me around. With all knowledge of the ground, he was telling me about how Stoke City Ladies had just left the ground to move into the currently vacant Northwood Stadium, which was previously home to now defunct Norton United. He was also telling me a bit more about Dominoes having over 30 teams of various ages and classes. It seems that there is a very good set-up here and with plans to work on the changing rooms, it'll hopefully remain a nice facility for years to come.


Just before the game kicked-off, I saw the referee and his officials getting a pre-match photo off of a woman who I assume knew them. Following this, the players slowly but surely emerged from the dressing rooms and headed out to the pitch ready to do battle. Having not known at the time that Abbey Hulton are actually in the division above the Dominoes, I probably wouldn't have thought the game would be a close encounter. At this level, the games I've seen have tended to be filled in with plenty of goals and therefore I'd set my pre-match prediction at 7-4 to Stone. Within 5 minutes of play, my expectations had so far been met as the first sloppy goal came. The Dominoes left-winger played in a good pass, which was initially mis-controlled by the striker who did then regain his composure before shooting the ball past a goalie, who I can only best describe as a cross between Brock Lesnar and Father Christmas, into the goal to put the Reds ahead. Dominoes 1-0 Abbey.


Abbey Hulton pressed after letting the opener in and the attacking right-back, who was sporting the nickname of "Killer", was a bright spark in the early exchanges. It was all Stone in the attacking department though for now, and they could have doubled the lead on more than one occasion. The big man in goal for Abbey Hulton seemed like he could do with a hand, so I offered him salvation after a chance flew wide by fetching the ball for him. He was delighted- so much so that when the ball next went wide and I had moved from behind the goal, he screamed out "aww, you fucking bastard!" I hope he was shouting at the ball and not me.


On the half an hour mark the inevitable second goal came. The number 8 for Dominoes had a dig from range and it made it's way into the goal. Dominoes 2-0 Abbey. This wasn't to be the last goal of the half either, and the number 8 for Abbey Hulton United this time responded to his number-sake. Showing skill and pace, he danced through the midfield and into the box, before prodding home AHU's first of the afternoon. Dominoes 2-1 Abbey. And as if that wasn't enough, I was to be treated to the fourth goal of the game just two minutes later. The Stone Dom's player made himself some space near the goal-line and despite 5 Hulton defenders being placed in the box, it was the number 10 for Dominoes who was picked out and he calmly popped the goal in from the edge of the area- a nice finish. Dominoes 3-1 Abbey. With the game slipping away from Abbey Hulton, it was time to pull out the ultimate defensive weapon. Dominoes broke away again, this time with number 9 pulling away, and as he approached the goal and lined up a shot, the chasing defender blurted out the sound of a turkey gobbling. The noise obviously worked, as the Stone striker lost his composure and placed his effort wide of the target. And that was half-time.


With the sun still just about shining through the cloudy skies, I treated myself to another can and took up a different spot for the second-half. It must be said at this stage that standing in between the two dugouts provided me with much hilarity and insight into life as a manager at this step in the Football system. With Stone's manager resorting to cigs to keep the stress levels down, he asked one of his subs at the top of the second 45 if he was about ready to come on. The lad continued his low-key warm-up as he replied with "gimmie about 4 months."


As the temperature on the field was rising, so was the heat on the bench too. After a ball went astray the Hulton defender told the Stone manager to grab a spare. After taking what was apparently deemed as too long to fetch it, the players and subs alike began to argue over the ball-smuggling, time-wasting techniques of the Stone bench and at one point it seemed likely to get tasty. Thankfully, the Stokie foul-language subsided and the anger was calmed down. For the final half an hour Abbey Hulton were pretty dominant and after a couple of half-chances missed they won a corner. This delightful little set-piece was glided in and met by a United head which went straight into the Dominoes goal. Dominoes 3-2 Abbey.

Abbey Hulton looked to get the equaliser and went close again straight from kick-off. The until now unmentioned ref for today's match was pretty woeful, and without going into much detail I would like to summarise his game with a description given by one side's manager. "The ref wants a fucking pole shoving up his fucking arse!"- fair description in my eyes.


Both sides ended the game with many chances, and Abbey Hulton even hit the bar, but ultimately the game would finish 3-2 to Stone. A truly confusing moment came at the end of the game which I would genuinely appreciate anyone readying to clarify to me. Around the 80th minute I saw the ref produce a red card to someone, not sure who, and then I missed what happened after from afar. A minute or so later I had a count up and it still appeared that 22 players were on the pitch, so whether the red card was rescinded or the only other thing I can think of is that he allowed a sub to be made instead of dropping a side to ten men? Either way it was an odd end to a poor performance from the man in black, who will always be remembered by me for a final moment of comedy in stoppage time. As AHU had a corner at the death, the ref stood outside the box and just as the kick was taken, he shouted out "I'm watchiiiiiiiiiing!" like some madman psychopath.


Upon the ref's whistle I departed the ground straight away in an attempt to beat the post-match traffic that was bound to arise from the dozen or so spectators. I left Wellbeing Park and that was it, ground number 38 visited and it is one that I may visit again to see Stone Old Alleynians on the "big pitch". Next up for me will be a trip to Essex next weekend.
Posted by Daz Knapton at 14:34