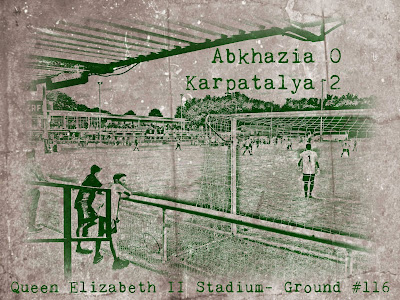 Game two of my CONIFA campaign saw me team up with top pal and fellow Groundhopping monstrosity Tom (Partizan Bristle) and to live up to the standard we'd set on our big football weekends, I booked us in to an Airbnb bungalow in Enfield so that we could take full advantage of the Queen Elizabeth II and also Coles Park, home of Haringey Borough. It was bound to be a boozy one- they always are- so the use of public transport would be a necessity on this particular jaunt, an addition that in itself has potential to make or break a weekend in North London.

With Tom coming through from Bristol for the final two phases of group games I had the task of arranging four matches that would provide a good mix of football at CONIFA's biggest ever World Cup. I had already done Bromley on Thursday and seen what the tournament had to offer, but in anticipation of this weekend I had asked my chum if he had any ground and or team preferences that he wished to see whilst over in London, so that I could try and work that in to my greater picture as I spend the whole tournament staying in the area. With the foundations laid and the packed lunches prepped, I hopped in my car to make the relatively painless ride along from Leigh-on-Sea and we met up at noon to check into Selda's cosy bungalow just over a mile away from the ground. Knowing that we had almost two hours to get to the Queen Elizabeth II, we took a stroll into the town in search of a bus and after accosting a very helpful driver to help us make it to a nearby stop, we continued to make it to the ground with still plenty of time to spare- meaning it was time to search out the beverage opportunities.

The best way I can describe Enfield Town's facilities is with the word round. As you'll have seen from my previous snap, the Queen Elizabeth II has a large ground level which houses the toilet facilities, a tea hatch and no doubt the dressing rooms, whilst the higher levels are where the bar and surrounding balconies sit. The main seating stand for the ground is also accessible from the spiral staircase up to Butler's Bar and the Grade Two listed art deco style building certainly has a feel of being like an old but sturdy British ship. The ground, which has been selected to host the Final next weekend, is complete with an array of glass window viewpoints from the large clubhouse area to complement the endless amount of blue bordered outdoor hot spots, making for an unusual piece of 1950's English architecture. As you head out from Butler's Bar on to the main stand you are greeted with an athletics selection including a Long Jump sandbox, a six lane running track around the pitch and of course the big green rectangle that we were here to see Abkhazia and Kárpátalya do battle on.

As much as I could go on making ship jokes, I said ship, the visuals of the ground itself would soon fade as Tom and I headed out to see a delightful dozen or so Abkhazia ultras getting the party started on what is arguably the most pointless raised terrace I've ever seen. Yes, the fans of the current World Cup holders and also hosts of the last edition of the competition were out in full voice and with a battalion of flags being waved we quickly discovered that these guys would be more than just getting behind their independent state. Located just off the Black Sea, Abkhazia is within the borders of Georgia but they do consider themselves as a nation within their own right, as do Russia and Venezuela, apparently! Their opponents today were a late addition to the tournament in Kárpátalya and the Hungarians living in Ukraine came into the tournament to replace Felvidék, with the Hungarian-speaking Slovakian highlanders dropping out in April. All caught up? Good, now on to the match.

In their opening group game Abkhazia had taken on and beaten Tibet by a scoreline of 3-0, whilst Kárpátalya had only been able to snatch a point in a 1-1 draw with Northern Cyprus. Abkhazia's CONIFA World Ranking is in the number 8 slot and as their opponents sat outside of the top ten we both made a foolish prediction of an Abkhazia victory. I went for 2-1, Tom guessed 2-0. As the game kicked-off a little after 2pm, the flag-wielding mega fans started to play tunes on that classic instrumental duo, the accordion and the police siren, with a tune being belted out on repeat throughout of "ya ya ya ya ya ya ya ya yaaaaa, ohhhh Abkhazia". Their side, playing in green and black, would have been able to hear the encouragement coming from behind the subs bench, but on the field the passion wasn't quite being converted into chances as they had to defend from the offset against a very capable Kárpátalya selection which included a full outfield ten of players from Hungary's top four tiers, with their keeper who plays in Romania's top division being the only exception. The opening ten minutes passed without a goal but it wasn't too soon after this when the first of the game came as Gajdos hit a shot from the left-hand side, which took a deflection to allow it to beat a flat-footed Aleksei Bondarenko in the Abkhazia goal. Abkhazia 0-1 Kárpátalya. By this point we'd moved around to the back of the leading side's goal as we found the mixture of partial vision and ear-splitting sirens noise to be too much even for us toughened football lovers to withstand for 90 minutes, but in a game of few chances for the world champs we didn't see to much action for Bela Fejer Csongor to have to deal with. Ruslan Akhvlediani of the Russian third tier side FC Metallurg Lipetsk had a shot blocked from close-range but as half-time drew closer we had to admit our disappointment with the Abkhazia side.

This battle of Central and Eastern European micro-nations left us feeling the burn as the temperature rose to the mid-Twenties and so we decided to observe the second-half from the upper balcony stand and I must admit the welcome relief of shade was just what I needed, well that and a couple of beers. Abkhazia started the second-half better than they'd played in the first and as one lady screeched out "goal is coming" a little less than three thousand times, the scene was almost set but for a nice save from Kárpátalya's keeper, who tipped a long-range strike over his bar. At the other end György Toma thought he'd sealed the game but his header on the hour-mark was ruled as being offside. Alex Svedjuk continued to try to put the game beyond Abkhazia too as he hit the post before Zoltan Baksa's 75th minute strike rattled the bar. The heat was clearly getting to Abkhazia's Head Coach Beslan Adzhinzhal as he had to held back by a fellow coaching staff member and with all this pressure building we decided to watch the final ten minutes back amongst the Abkhazian fans- who were dancing and wrestling with each other by this point.
The game crept well into injury time and although there was a chance that the holders could sneak a point, ultimately it would have been undeserved and in fact it was Kárpátalya who looked more likely for a second, which they eventually got in the very late stages with a very nice strike from range. Abkhazia 0-2 Kárpátalya. The game was shortly brought to a close and as people started to emerge in vast numbers for the 5pm kick-off between Northern Cyprus and Tibet, we dashed off to find a bus that would take us down the A10 to White Hart Lane, the location of Coles Park, for a goal-feast between Padania and Tuvalu. I'll be back at Enfield twice more during the tournament, with Tuesday's all-African match between Matabeleland and Kabylia coming my way before I am back on Saturday for the big Final. Two games down so far, with many more to go!
Posted by Daz Knapton at 03:16