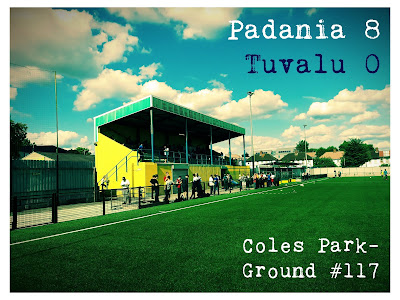 Following on from our 2pm game at Enfield's Queen Elizabeth II stadium, Tom and I found ourselves getting off the 217 Bus at White Hart Lane, ready to get our trot on over to Coles Park in anticipation of the late afternoon bout between Padania, arguably the strongest side in the tournament, and perhaps the least fancied side in the form of islanders Tuvalu. This second fixture of Group C would follow on from Padania's 6-1 demolition job on Matebeleland on Thursday, whilst Tuvalu would look to do their hardest to keep the score respectable after their 0-4 loss to Székely Land at this very ground. All of Tuvalu's group games would be taking place here at Coles Park, but I did begin to wonder if perhaps these are the only three games in which the Tuvaluans have ever played on an artificial grass surface.

Coles Park, the home of Haringey Borough, has been used to seeing some big games already this season and in fact it was the Borough who won the Isthmian League North Playoffs as they overcame the likes of Canvey Island and Bowers & Pitsea, two clubs in which I've visited their grounds in the past few seasons, to secure a place in the third step of non-league football for the 2018-19 campaign. The club also had the privileged of welcoming Leyton Orient to Coles Park in the FA Trophy First Round back in December, a match which produced a record attendance of 1,133 in their 1-2 defeat. Today was all about the CONIFA World Cup, but it is also interesting to be able to follow how the host stadium's club sides have got on too. As we arrived in the heart of Tottenham's borough of Haringey, the temperature at last time of checking was 27 degrees as the 5pm kick-off time loomed, we darted straight into the club's bar in search of frosty refreshment and a bit of shade for two minutes and then we scooted out to join the queue for entry into the ground. This ground was one of those, a bit like Kettering Town's Latimer Park, in which you actually have to leave the four walls of the stadium to get to the clubhouse.

As 5pm passed we were inside the ground and having our usual nerdy perimeter check and taking photos of pieces of scaffolding tower and wooden sheds, as you do, only to realise that the time of the match kick-off time had been moved back to 5:30pm and the only person who seemed to know anything about it said that it was because there weren't enough dressing rooms for the teams who played at 2pm and at 5pm, which is fair enough. So whilst the Tuvalu lads continued to warm-up so did the sun beating down on the 3G pitch, meaning that we must continue mooching around the ground for that beloved undercover standing terrace. We came across a Tuvalu player and gave him an encouraging shout-out, which he thanked us for as he joined the rest of his side in going into the dressing rooms to change into their match kits, and after a quick-change the lads were back out with the Padanians ready for the national anthems. After a very elegant and tame tune from Oceania's finest, we then sat and listened to a heavy metal rendition which represented the Padania national team. Trust me, if you get a chance to have a listen it is well worth it- whoever they are, I'd go see a gig.

I knew full well that this afternoon's game was going to be fairly one-sided and with Padania selecting a side that includes a player from as high as Serie C/A, the equivalent of England's League One, they were looking ready to take on their opponents from the sinking South Pacific islands of Tuvalu, home to approximately 10,600 people all in. I predicted a 9-1 victory for Padania, whilst Tom went with a more modest 6-1. Unfortunately for Tuvalu my margin of victory was spot on and within 9 minutes the second highest ranked side in CONIFA were ahead as SC Caronnese forward Federico Corno began the route after being put through by the Padania number 9. Padania 1-0 Tuvalu. Corno hadn't got in on goals during the 6-1 victory on Thursday so he was looking to make today's match count- and when he was set up again in the 12th minute he made no mistake in doubling his sides early lead. Padania 2-0 Tuvalu. Completely as expected, Padania's white and green outfit were too good for the golden shirted Tuvalu lads and just before the 20 minute mark Riccardo Ravasi nodded in a header to give the North Italian outfit a firm lead. Padania 3-0 Tuvalu. The game was over before it even started really.

Astonishingly we had to wait a further 15 minutes before the next goal and in what would be the first of an eventual hat-trick, Giulio Valente notched his first of the day and he looked delighted to break up the quarter of an hour goal-drought that his side were suffering. Padania 4-0 Tuvalu. The fifth was another header and it would allow Corno to complete his own treble in the 38th minute- the first-half had been even more dominant from the Padanians than I'd expected and unfortunately for Tuvalu they looked powerless to resist their European opposition in a relentless display so far. Padania 5-0 Tuvalu. The first-half Tuvalu turmoil wasn't over yet neither and just before the Ref put an end to the half we would see Valente released again and he made no mistake in sending his side into the break with a six goal lead. Padania 6-0 Tuvalu.

You know how sometimes you go to grounds and you crave to see a goal, well in this case we were in a completely different boat. We thought we'd take 15 minutes to top up our beer supply and even then we couldn't escape the goals as we walked into the clubhouse just at the time that Alex Iwobi was scoring his goal for Nigeria against England on the big screen. Is there no escape?

As we came back out into the scorch zone the play had already begun, and to be fair Tuvalu did look a bit more prepared for the slaughter this time around. Afelee Valoa, a midfield player for Nauti FC, almost raised the luscious green roof of Coles Park when his 66th minute effort had to be saved. Five minutes later though and it was the same old story for the nation who'd travelled for the best part of two days to get to London and this time a volley from a corner was thumped into the net by William Rosset. Padania 7-0 Tuvalu. And in the last few minutes the final goal came, with Valente trying to keep up with fellow strike partner Corno's tally for the day he grabbed a hat-trick for himself and doing so jumped to the top of the scoring charts for the tournament, with four in two. Padania 8-0 Tuvalu. Reading this you may not think there's much to take away from the game. As a football match, it was heavily uneven and it does seem as though Padania are looking like strong favourites for the Cup, but one major historic event did take place here at Coles Park today and it came from a decision made by Referee Raymond Mashamba. In the late knockings of the match, Tuvalu and Padania both witnessed one of their players each get dismissed with the first ever uses of the green card. For those who don't know, this is a third disciplinary card that CONIFA have introduced as a way of removing any player from a game for dissent, but instead of it being a straight sending off the player is instead subbed off rather than their side being reduced to less players. Tuvalu received the first one and then within minutes a Padania player got himself into trouble for arguing with Mr. Mashamba. Amazingly, this will go down as a "Pint of Football" memorable moment as we witnessed the first EVER green card. Not many people sat can say that.

So with that our day had come to a close and with no particular rush to get back to our digs in Enfield we decided to check out a bit of scenery whilst we were in the area. First off, we made our way into Spurs' new mega stadium to see how progress was going, before going for a couple of pints in the notorious Bricklayers pub on High Road. A proper way to end a great football day.