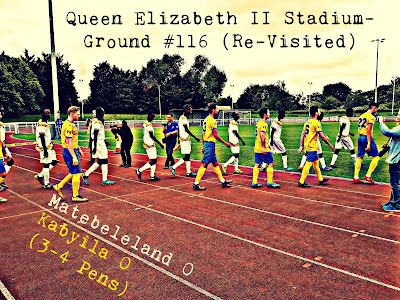 A second trip of three for me to Enfield Town's Queen Elizabeth II Stadium came as I attended one of the lower bracket Quarter-Finals of the CONIFA World Cup, with the tournament looking to search for the side worthy of being the best of the worst in the battle for 9th place. Starting off my latter stages run wouldn't see me tick off a new ground, having been to this ground on Saturday for Abkhazia's 0-2 defeat to Kárpátalya, but I would at least get to see a couple of teams I hadn't come across yet in the shape of two of Africa's finest, Matabeleland and Kabyila.
Obviously CONIFA has a tough job to squeeze all of the forty-eight matches into a matchday calendar of just six days and it means that each team is playing half a dozen times in just 10 days, but with today's match being hosted at 3pm on a Tuesday afternoon it did make for an unfortunate crowd number of maybe 50 at a push, which is a shame when you consider over 1,200 crammed in to Enfield's sports complex on Saturday evening to see Northern Cyprus defeat Tibet. Additionally, it was a shame that I didn't get to see the legendary locals that everybody had been raving about during the Group Stages for their fabulous traditional dress code and carnival style atmospheric dance rhythm. Oh well, the main thing is that I'd made it and with pretty much an hour to spare I observed a bit of the training routines being endured by the Matabeleland squad. Unfortunately these two nations were the only couple that I'd done very little research on due to their tournament squads not being published beforehand. What I do know is this south-west region of Zimbabwe has been through a lot of trying times off the pitch, as have many of CONIFA's nations, but with tens of thousands of Matabeleland civilians killed in the 80's whilst Robert Mugabe was beginning his role as Prime Minister of Zimbabwe, the Central African colonialists count their lucky stars to be living in a better place these days and attending the World Cup with former Liverpool legend Bruce Grobbelaar as their Goalkeeping Coach alongside their Manager Justin Walley, an Englishman who is also the CONIFA Africa President, certainly shows the progress that the side can make with enough practice and education. In the group stages Matabeleland lost their opening two games by five goals before defeating Tuvalu 3-1 in the ultimate basement battle of the tournament. Their North African opposition Kabylia, based in the Tell Atlas mountains of Algeria, have a lot of French and Swiss connections from the Algerian War and although there are as many as ten million recognised Kabyles, at least twenty percent of those live abroad. Their footballing efforts so far have left them with one draw and two defeats and although they got a spirited 0-0 draw out of United Koreans in Japan, they did also take a pounding in a 0-8 result on the opening day against Panjab and most recently they had a 0-4 defeat to Western Armenia on this very pitch. With zero goals scored so far by the Kabyles, I should have known better than to make my pre-match prediction of 3-1 to the North Africans!

As the match began there was a lot of good end-to-end attacking intent, but little in the way of actual shots on goal. Kabylia forced a couple of corners but other than that it was quite a tactical affair really- neither side wanted to lose. With 20 minutes on the clock there was a large stoppage as Kabyles goalkeeper was injured, which eventually led to him being replaced, whilst over at the other end Enzo Mezaib was set up only to see his scuffed shot go out for another corner. In terms of possession, I'd say Matabeleland were possibly on top but their best chance of the half came when Sipho Mlalazi hit a free-kick at the wall and then also rifled his follow-up strike into the same sturdy yellow shirted obstacle. 0-0 at the break.

The second-half had a few more highlights in terms of shots on target and just before the hour mark Shylock Ndlovu forced a good save from the Kabylia number 1, only for their resulting corner to be poor. I got chatting to some old Enfield boys during my half-time pint and amongst the two West Ham fans and an Ipswich supporter I was involved in a good chat about all things non-league. The trio of gents were telling me of how they feel they are being priced out of their respective professional clubs and are keen to get to more non-league games. I told them about my ventures of hopping around grounds far and wide and I'd like to think I gave them food for thought regarding making football a regular and affordable hobby. They got asking me about how I was finding this tournament and obviously that set me off on a huge ramble of how great the CONIFA cause is and how fab it is for London to host it, but I was also telling them that this game had not been typical of the competition so far. In all games I'd been to there had been many loyal fans on display, plenty of goals to enjoy and of course some scorching weather. Anyone reading this report who is still debating coming to a game, don't be put off my this goalless game in a cloudy and sparsely attended Enfield stadium. The Final is gonna be hosted here and it promises to be one hell of a game!
Ultimately the game was destined for the shoot-out and although Dumenkosini Ndlovu went close with a volley just before stoppage time and a further Godwin Ndlovu strike was well saved at the death, Matabeleland would eventually have to settle with the lottery of penalties. Grobbelaar, most famous for his wobbly legs penalty antics whilst in a Liverpool jersey, instantly consulted all of his players and got them ready to do all they could to take the victory in what is always a high-pressure environment. Matabeleland went up first, with Praise Ndlovu scoring, and this was met by Belasla hitting the back of the net for Kabylia. The action then really unfolded as Mlalazi hit the bar and then watched as his teammate Bruce Sithole saved a Kabyles effort to keep it level. Matabeleland would score their third whilst Hadid hit the woodwork for the opposition, but then Oscar George was denied by Kabylia's keeper and they in turn levelled things up with just one penalty left each. Both scored their fifth and then we went into sudden death and that with Musa Sthamburi having his effort saved, it was all up to Mezaib to score the crucial kick- which he did, to the delight of all in the Kabylia dugout.

Knowing that kick-off for my 6pm game in Aveley was just 45 minutes away, I shot straight off and headed my way over the M25 to Essex for the Abkhazia versus Tamil Eelam encounter. Would I make it on time? Not according the locals, who laughed when I said I was heading through the dreaded rush-hour traffic and on to a motorway notorious for delays. But, I'm nothing if not an optimist and so I sprinted away to find my car and yet another CONIFA match.
Posted by Daz Knapton at 03:32